Hello, I must be going.

"Hello, babies. Welcome to Earth. It's hot in the summer and cold in the winter. It's round and wet and crowded. At the outside, babies, you've got about a hundred years here. There's only one rule that I know of, babies—God damn it, you've got to be kind." - Kurt Vonnegut
This site has been working hard, so it's retiring now.
at December 31, 2021 No comments:

Who Am I to Write about Race?

I first learned about race from my father when I was a small boy who had just moved to Florida in 1959. He explained that ignorant people think skin color makes a difference in whether one person is the equal of another, and the most ignorant people refer to black people as “niggers”, and if he ever heard me use that word, I would get the worst spanking of my life.

My family got caught up in the civil rights struggle in the early 1960s. I went on my first march for integration in 1964 when I was nine. At one point, we could not get fire insurance because word was out that the Klan would burn us down. They never did, perhaps because wild talk doesn’t always lead to action, perhaps because Dad let it be known that he had a shotgun and would not hesitate to use it on trespassers.

I wrote a novel about that time called Dogland. It is semi-autobiographical, which means it has more true things in it than many books that are called autobiographies. It’s my most-praised book:

“In late 1950s Florida, the transplanted Nix family opens Dogland, a tourist attraction, and their beliefs in integration attract the attention of the Klan. Young Christopher Nix befriends a black man and a Seminole woman who may know the real secret to the Fountain of Youth. Shetterly captures the rhythm, feel, and language of cracker Florida, its legends, and the clash of cultures. Recommended.” — Library Journal

“A masterwork. A particularly American magic realism that touches the heart of race and childhood in our country; it’s 100 Years of Solitude for an entire generation of American Baby Boomers, and deserves the widest possible audience.” — Ellen Kushner

“Dogland is the one of the finest novels I’ve ever read.” — Cory Doctorow

Because of my childhood, race has always mattered in my life and my work. Project Implicit’s test gave me this result: “Your data suggest a slight automatic preference for African American compared to European American.” I would have preferred to be among the people who show no preference for any race, but I’m content knowing my bias.

My favorite black thinkers are W.E.B. Du Bois, Malcolm X (after he left the Nation of Islam), Martin Luther King, James Baldwin, Adolph Reed, and Barbara Fields. Like them, I am a universalist who rejects identitarianism.

Fields provides a good example of the difference between our understanding of history and that of race reductionists:

“Probably a majority of American historians think of slavery in the United States as primarily a system of race relations — as though the chief business of slavery were the production of white supremacy rather than the production of cotton, sugar, rice and tobacco. One historian has gone so far as to call slavery ‘the ultimate segregator’. He does not ask why Europeans seeking the ‘ultimate’ method of segregating Africans would go to the trouble and expense of transporting them across the ocean for that purpose, when they could have achieved the same end so much more simply by leaving the Africans in Africa.

No one dreams of analyzing the struggle of the English against the Irish as a problem in race relations, even though the rationale that the English developed for suppressing the ‘barbarous’ Irish later served nearly word for word as a rationale for suppressing Africans and indigenous American Indians. Nor does anyone dream of analyzing serfdom in Russia as primarily a problem of race relations, even though the Russian nobility invented fictions of their innate, natural superiority over the serfs as preposterous as any devised by American racists.” — Barbara Fields

Baldwin sums up our take on racial identification:

Malcolm X explains our take on what we’re working for:

P.S. Identitarians insist I’m not qualified to write about race because I’m white. I’ll go with another writer’s answer:

“Being a Negro doesn’t qualify you to understand the race situation any more than being sick makes you an expert on medicine.” — Dick Gregory

I understand why there are so many race reductionists in the world, but I’ll follow the example of Du Bois, King, and Malcolm X after he left NOI and focus on the larger picture.

A friend makes a great cioppino (aka shellfish stew Provencale), but the ingredients are pricey and the process is time-consuming. I took her recipe and created the quick and easy version, which is still pretty great. Because it's a poor man's dish, all of the ingredients are suggestions, not requirements. I like strong flavors, so where I say a dash or splash, I'd use a heavy hand.

2 cans of tuna, or any fish you have.

olive or other oil

several cloves of garlic or a dash of garlic powder

a dash of cayenne or paprika or any red pepper

a dash of thyme

a splash of lemon or orange juice

a dash of black pepper

a cup of white wine

1 Saute vegetables, preferably in olive oil, with your spices.

2 Add wine and tomato and bring to a boil.

4 Simmer for twenty minutes or so if you've got the time, though you can eat it as soon as you're sure the fish is cooked. (Or put it in the refrigerator to eat later. The longer it sits, the more the flavors mature.)

Has anyone in the last fifty years actually said women are ruining science fiction? When I was a boy in the '60s, one of my first faves was the ubiquitous Andre Norton. By then, her readers knew she was female. Because of her, I thought Andre was a girl's name.

The following art is from Out Of This World: Early Black Comic Book Heroes: The Red Mask, The Comics of Syndicated Features: Adventures of the Red Mask, and Facebook's comic strip appreciation group, where Stefan Wood posted black and white scans of the Red Mask's entire story. 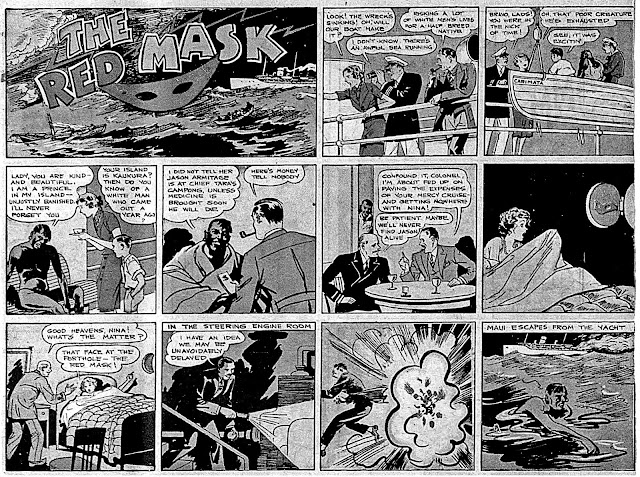 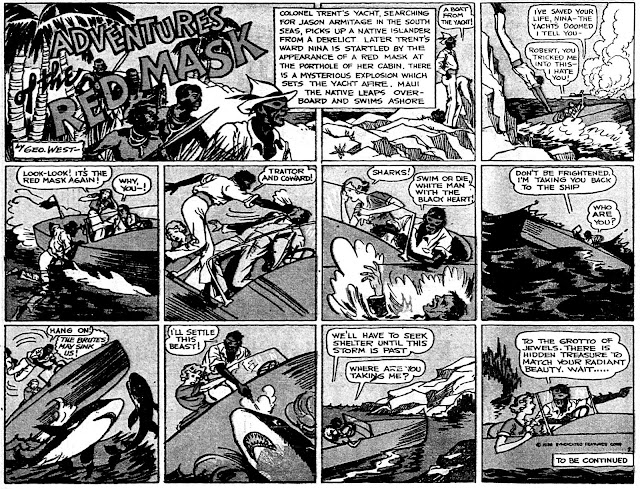 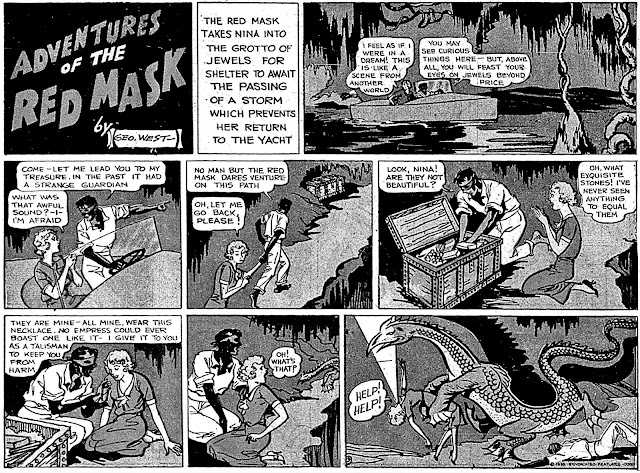 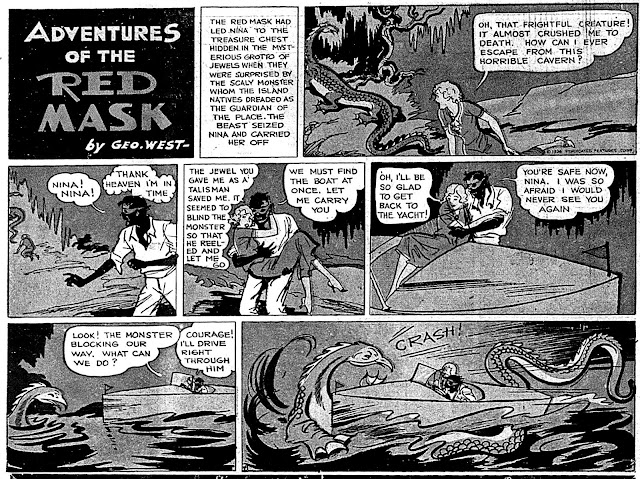 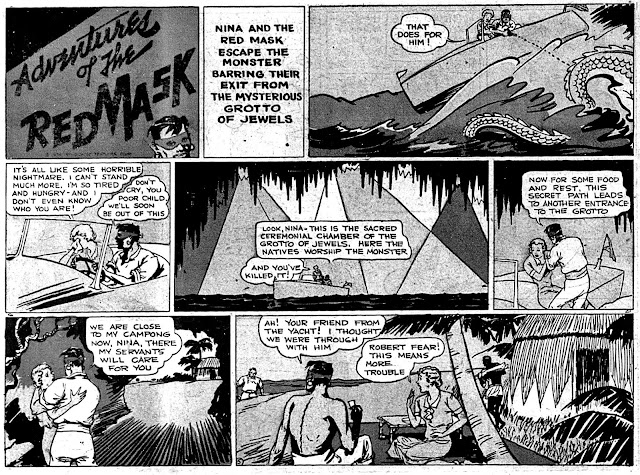 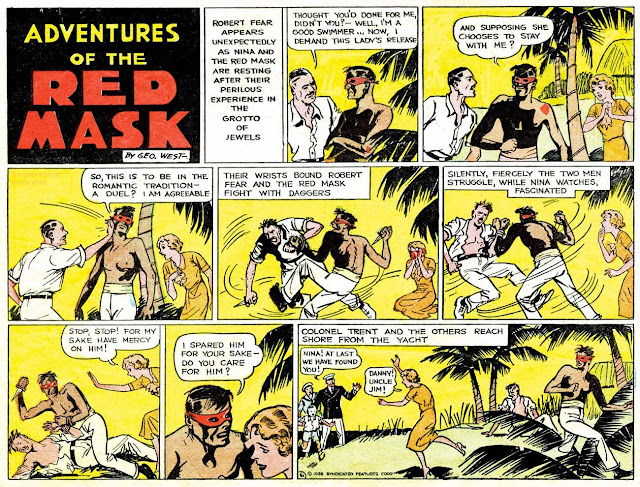 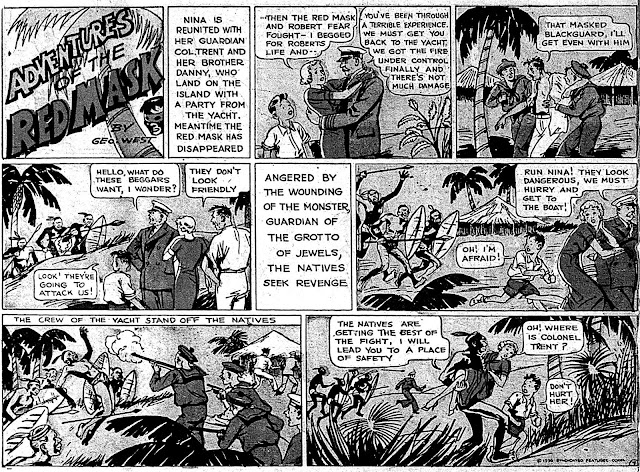 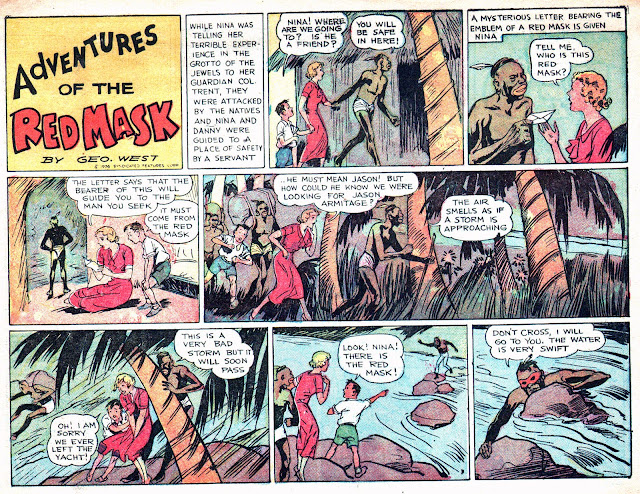 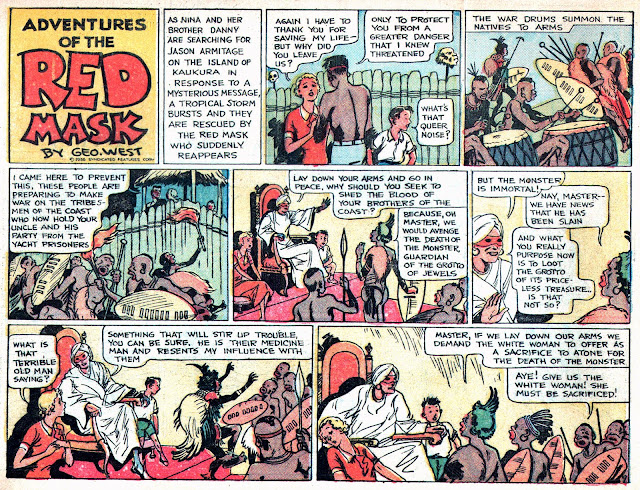 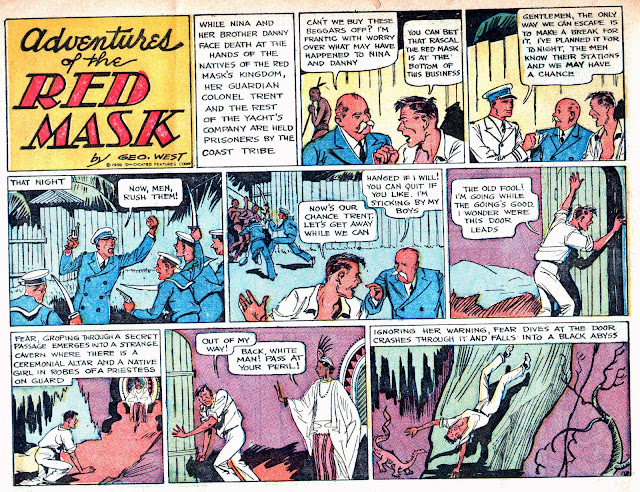 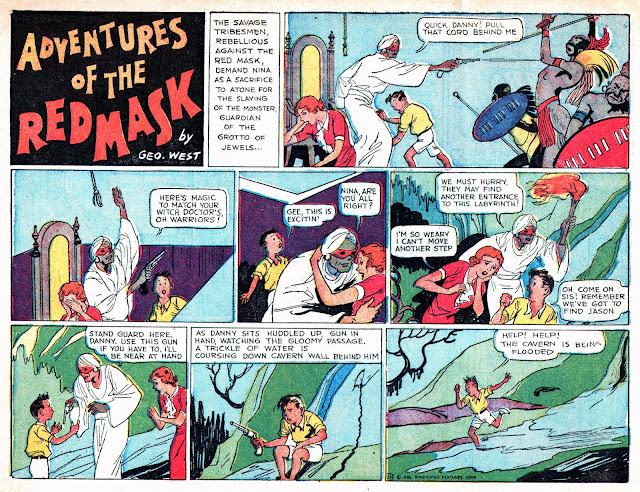 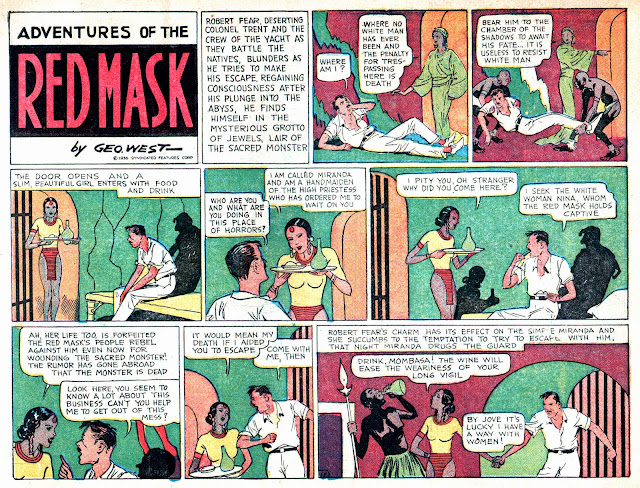 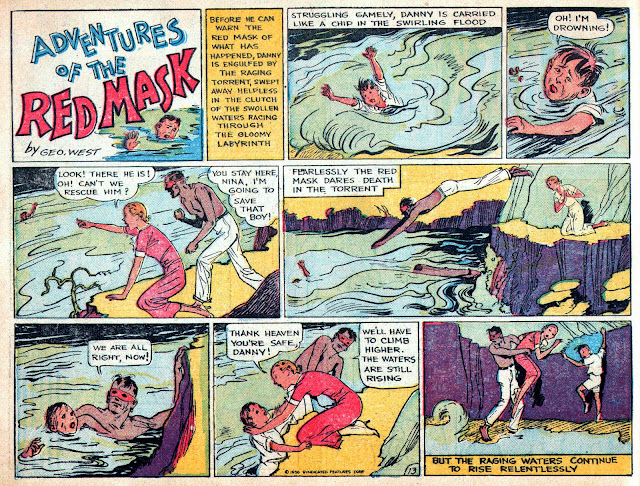 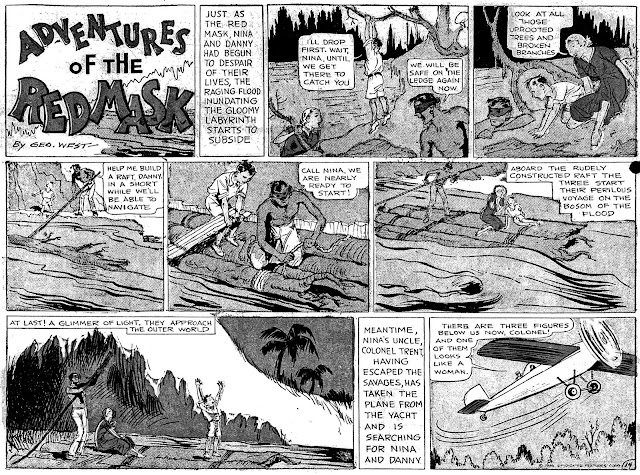 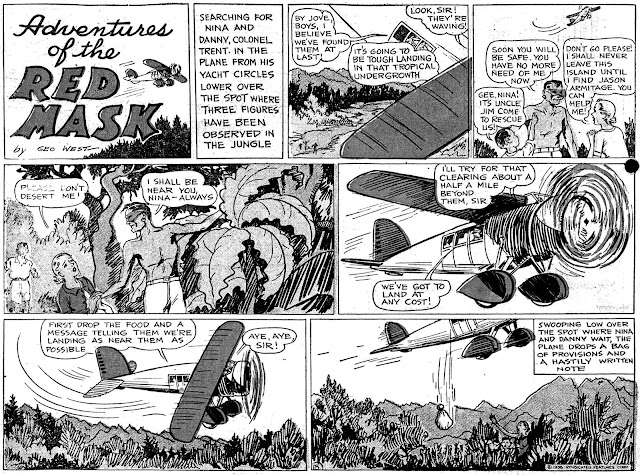 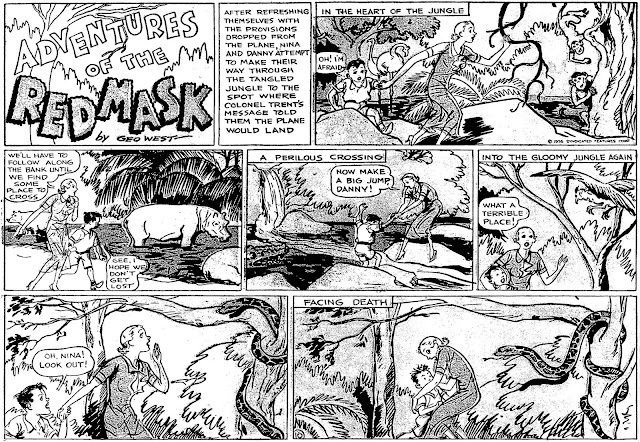 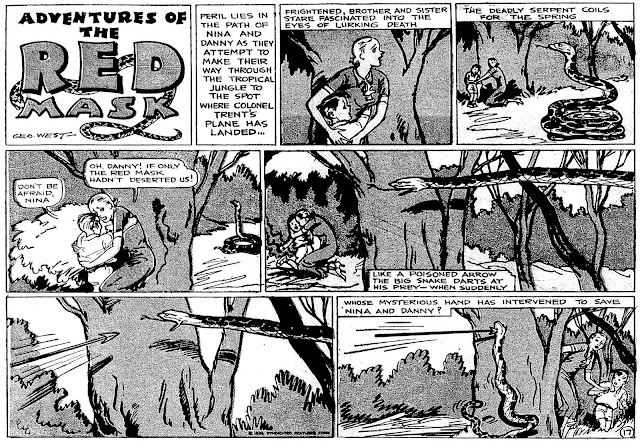 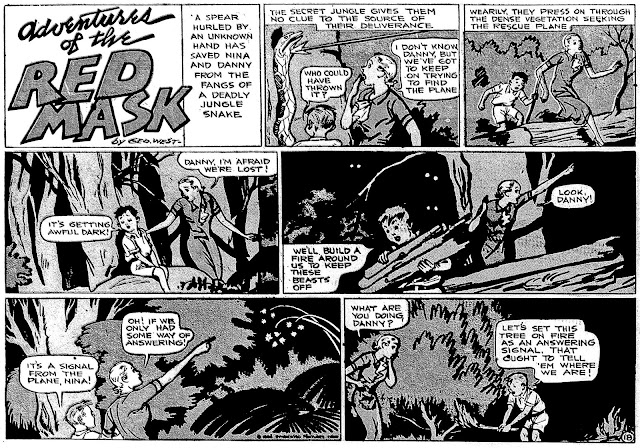 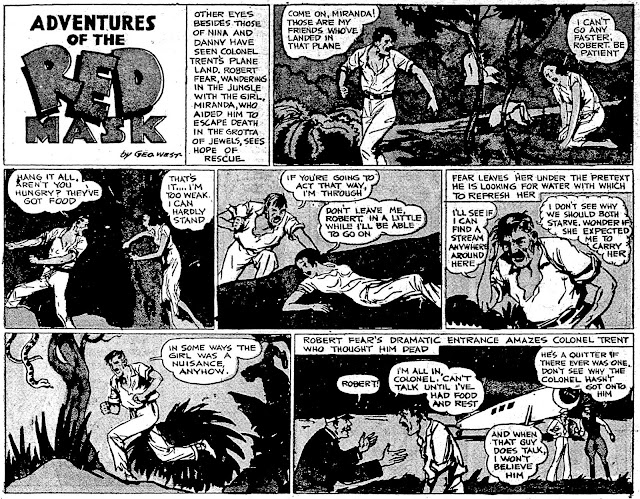 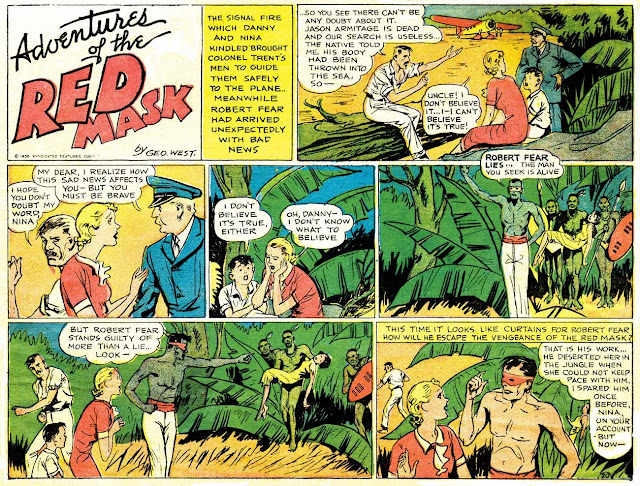 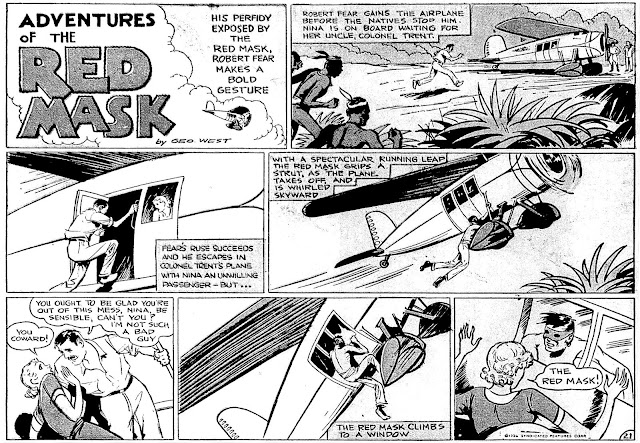 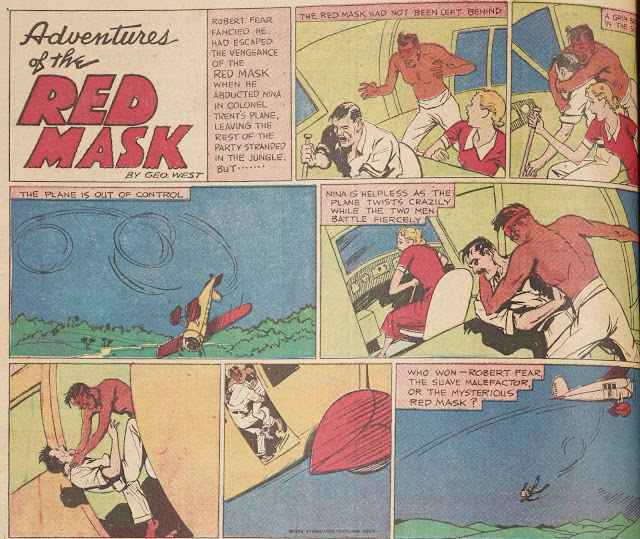 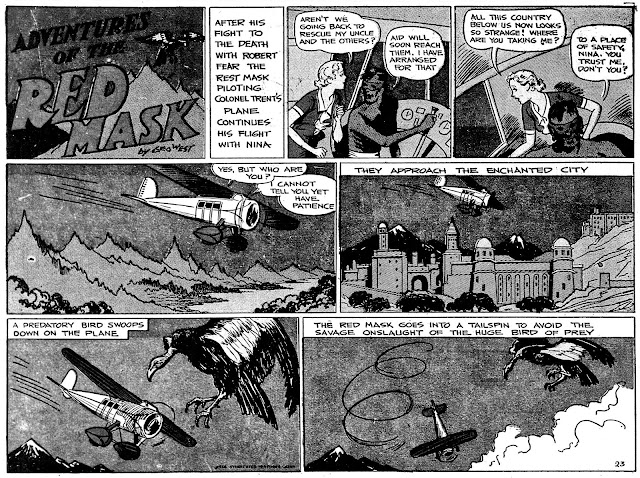 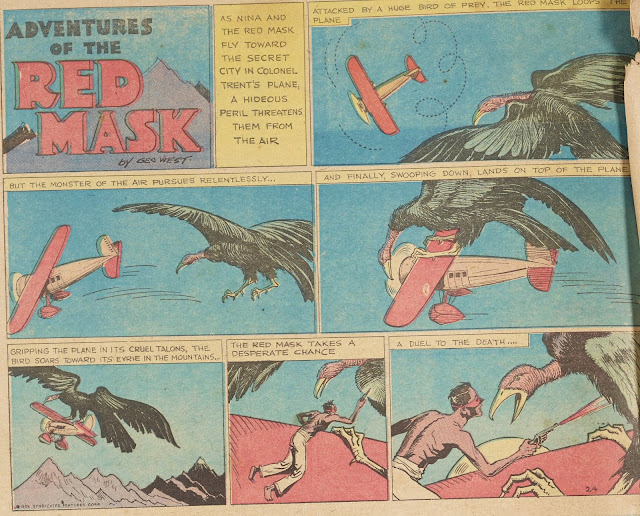 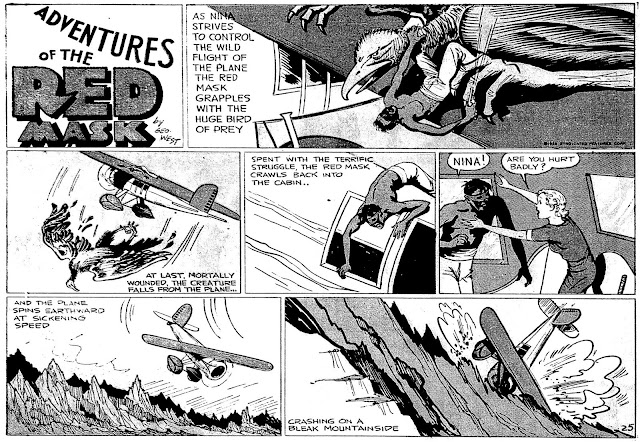 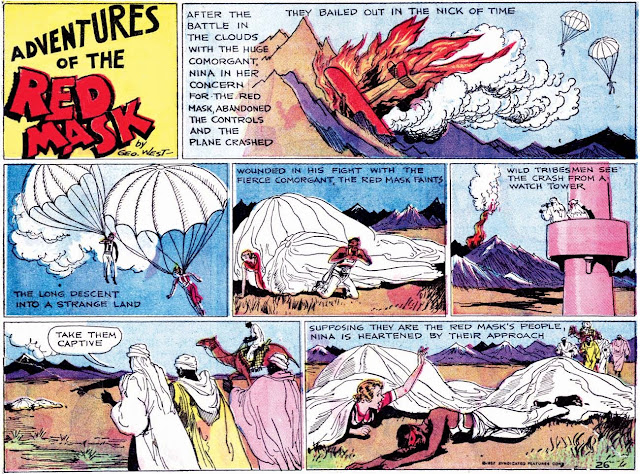 The newspaper strip ended there. In 1939, The Adventures of the Red Mask were reprinted in four issues of Best Comics. After the first issue, they drew him as white on the covers, but they left him black inside. 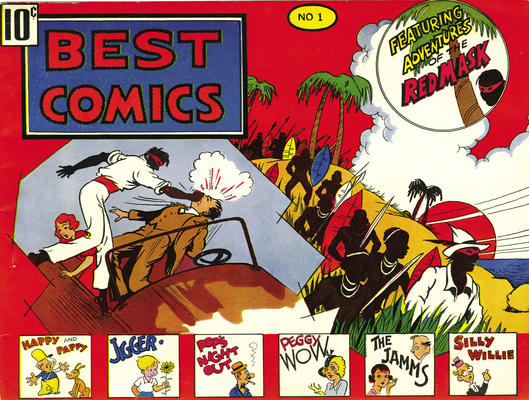 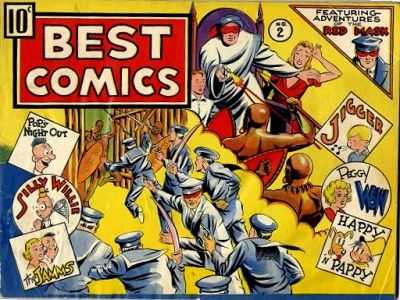 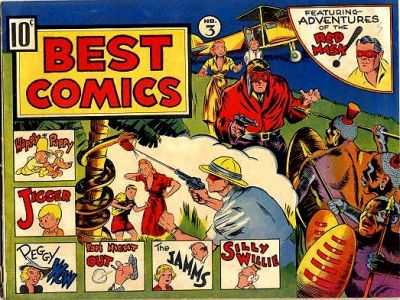 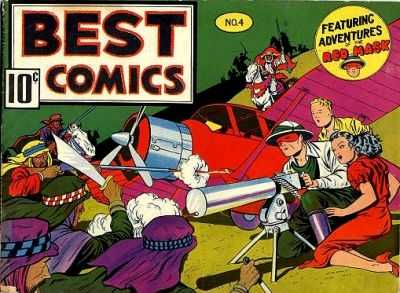 Yesterday, I found the handle of my garage door was broken. Someone had twisted it hard to get in.

But we had put a bolt in one of the holes of the door's track so it couldn't be raised. A more committed thief would've broken a window or broken the door down, but most thieves want to get in and out fast. The bolt was enough to make this thief move along.

Obviously, putting a pin in the track adds a little nuisance if you have a garage door opener, but it doesn't take long to pull the pin before you go out and put it back in after you return.
at June 22, 2020 No comments:

the myth that John M. Ford's family tried to keep his work out of print

I left this at John M. Ford’s books are being republished, but how did he fall into obscurity?:

I was one of Mike Ford's friends and editors, and I want to go on record with this: Martha Fry was extremely helpful when we wanted to keep his Liavek stories in print. The breakdown in communication between his original family, his fannish family, and his agent has many reasons, but there are no villains in that story. There are only gossips who love drama, as there are in any community. If anyone claims his first family tried to make his work unavailable, I will point to the Liavek anthologies as evidence that's not true.