The Education of Little Tree: where is the racism?

I just finished The Education of Little Tree. I'd heard about it for ages, but everyone said it was wonderful, so I avoided it—I have little stomach for "wonderful" books. Then I heard it was racist and Oprah had disowned it, so I got curious: How could a racist write a book that many people of many races would love? Writers can write from perspectives that are not their own, but that calls for empathy, and racists have little empathy for anyone they do not identify with.

Still, it stayed low on my priorities until I saw it on a "Do not read! Racist!" list. So I read it.

Now, it has no good people who identify as Christian and several bad ones who do, so the book may be racist against the Christian race. But some of the good people in it seem to be Christian. Given the setting, it's extremely likely they are. I don't think any Christian who gets Christianity would be upset by its portrayal of Christian hypocrites.

But it may be racist in one way: none of the greedy people are good people. The store owner is decent, but there's a general sense that the race of greedy people screw up life for the rest of us.

Which may be why Oprah decided to disavow this book. If you're a Christian living in a fifty million dollar mansion, you might be glad to denounce a book that suggests rich people are part of the problem.

I don't know how accurate this book is. I've lived in the Deep South, and I've lived next to an Ojibway reservation in Ontario, and I didn't see anything that was insulting to southerners or Indians. If you're hoping to learn about Cherokee ways, this is not a good book to read—it's about a kid and his grandparents who live in the mountains, far from other people. But if you're hoping to learn that Indians are good people who were horribly treated by whites, this is a fine book to read. I can't do better than the Atlantic's reviewer: "“Some of it is sad, some of it is hilarious, some of it is unbelievable, and all of it is charming.”

Sherman Alexie said, "Little Tree is a lovely little book, and I sometimes wonder if it is an act of romantic atonement by a guilt-ridden White supremacist, but ultimately I think it is the racial hypocrisy of a White supremacist." I think Alexie's a great writer, but he over-estimates the literary abilities of white supremacists. It's true the characters are idealized, but the list of books with idealized characters is long: some stories are realistic, and some are romanticized. The Education of Little Tree is drawn with broad strokes, but so is The Boondocks.

I recommend Christina Berry's write-up about the controversy at All Things Cherokee: The Story Behind The Education of Little Tree.
Posted by Will Shetterly at 12:33 PM 4 comments: Links to this post

America's poor are its most generous givers

America's poor are its most generous givers | McClatchy


...the U.S. Bureau of Labor Statistics' latest survey of consumer expenditure found that the poorest fifth of America's households contributed an average of 4.3 percent of their incomes to charitable organizations in 2007. The richest fifth gave at less than half that rate, 2.1 percent.

Email ThisBlogThis!Share to TwitterShare to FacebookShare to Pinterest
Labels: sharing

Findings from this study indicated a clear difference in aggressive responses between the genders, with women overwhelmingly compelled to retaliate by attacking the offender’s reputation, mostly through gossip. This gender effect panned out even after controlling for participants’ evaluation of the social appropriateness of such acts. In other words, in spite of the fact that the women realized malicious gossip wasn’t socially appropriate, this was nevertheless their preferred first point of attack. Men, on the other hand, were more evenly divided in their response, but failed to show the same preferential bias for acts of “informational warfare”...

Bitter behavior is so common and deeply destructive that some psychiatrists are urging it be identified as a mental illness under the name post-traumatic embitterment disorder.

This makes sense to me. PTED isn't the only response to mobbing, of course, but it may be the most obvious one.
Posted by Will Shetterly at 11:06 AM 1 comment: Links to this post

I especially recommend Mobbing and the Virginia Tech Massacre. It's easy to think the writer's taking the outsider's side too much, so I'll note this, from his conclusion: "This does not mean trying to excuse Cho's inexcusable crimes. Nor does it mean trying to shift blame and scapegoat somebody else. It means trying to get at the truth of what happened: empirical identification of the sequence of events, what led to what. Sound scientific explanation honors those who wrongly and unnecessarily lost their lives or suffered injury at Virginia Tech on April 16, 2007, and gives promise of preventing repetition of the tragedy."

If we turn a blind eye to toxic relationships at work because we fear being disrespectful to the dead, we are actually doing them an injustice. If positive changes come out of workplace tragedies, then at least those who died did not die in vain. At least we can have some hope that by addressing the complexities behind murders in the workplace, lives can be saved in the future.

Posted by Will Shetterly at 2:06 AM 7 comments: Links to this post

If I'd written the last draft of the Star Trek movie

The quick review: Heaps of fun, but too much Old Spock and not enough Uhura.

And why didn't they change the sex of any of the characters? There's a fine answer at The Panopticon: Do Gay Martians Have the Right to Marry?

That out of the way, spoiler alert!

If I'd written the last draft of the Star Trek movie, I would—
1. Make Chekhov female.

The rationalization is easy: he was born a few years after Nero's alteration to the time line, so "his" moment of conception could've shifted, even just an instant, and the genes would unite differently. (This isn't to slight the actor they cast, who was great.)

In the bar, she should enter the fight against her fellow cadets to help save Kirk—which would make him have an even bigger crush on her. There should be a scene where the universal translator misses something significant that Uhura catches to save the day. And when Spock and Kirk beam aboard Nero's ship, she should come along—having a Romulan speaker would be awfully useful—and get to do some buttkicking there.

3. Leave Old Spock in the future.

I might keep a cameo of him as Nero explains his motives. Otherwise, Old Spock's presence weakens every plot point he's in so much that I wonder if he was added in a late draft.

a. On the ice planet, Kirk should be saved by Scotty and Scotty's alien buddy.

b. Scotty should figure out the necessary equations without help, damn it!

c. When Kirk meets Spock on the bridge, they should argue simply because that's their nature. Spock loses it, then gets control of himself (maybe after Uhura knocks him aside?) and turns over command of the ship. And that moment of Spock doing the right thing under pressure should be Kirk's moment of realizing that Spock is an amazing person who should be his friend.

d. At the end, Spock should say farewell to his father, not his older self.

Even so, I was happy enough with this movie that I look forward to the next. Yes, the science was silly, but when you're accepting faster-than-light and time travel, you shouldn't quibble about red matter.
Posted by Will Shetterly at 8:38 PM 15 comments: Links to this post

I found them looking for black female superheroes who have been the title characters of their comics. Discovering that Captain Confederacy is included makes me feel right chuffed.
Posted by Will Shetterly at 9:47 PM No comments: Links to this post 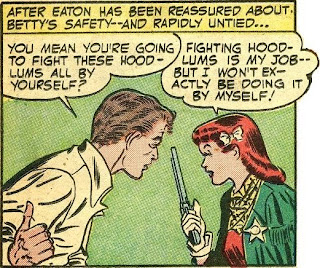 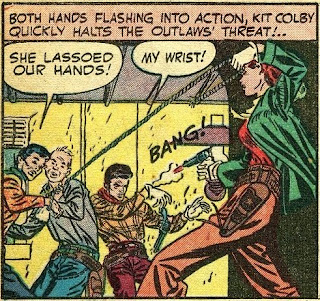 via Golden Age Comic Book Stories
Posted by Will Shetterly at 9:33 PM No comments: Links to this post