Liz Shetterly, and her memorial service

I've posted 198 pictures at flickr that were taken by one of her neighbors who goes by 3.14R@. I've chosen a few that seem representative. Here's Liz at her flea market: 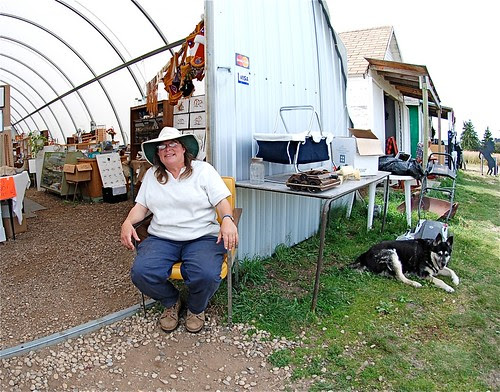 We held her memorial service there: 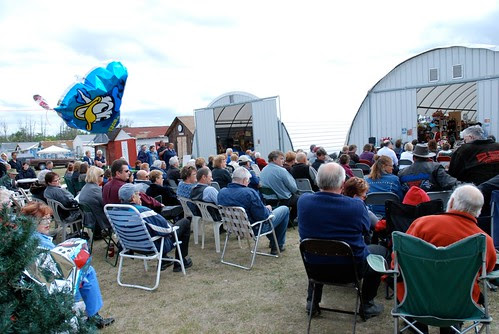 My mom and dad, next to my niece, brother, and sister-in-law: 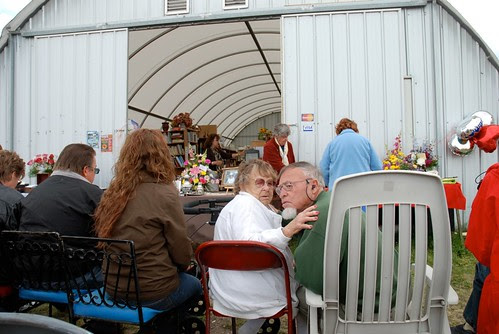 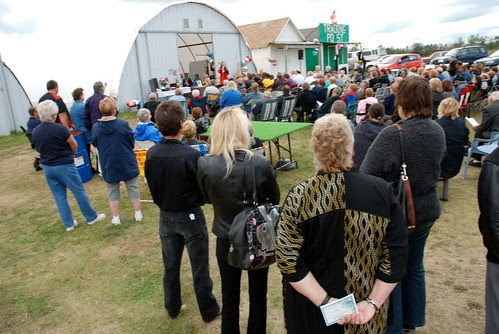 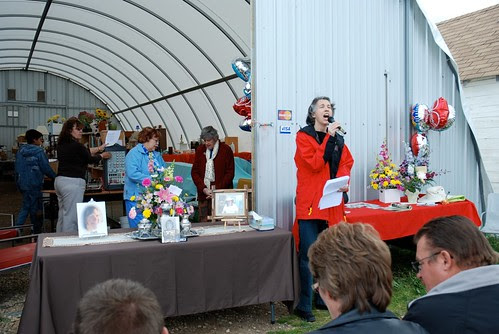 My dad and cousin Wanda spoke: 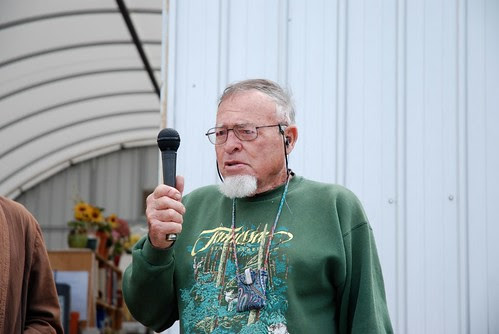 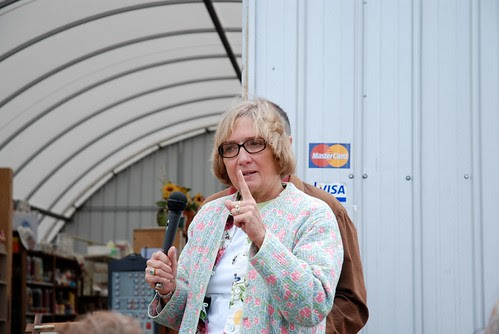 So did good friends we had known in northern Ontario, at what is now Mishkeegogamang First Nation: 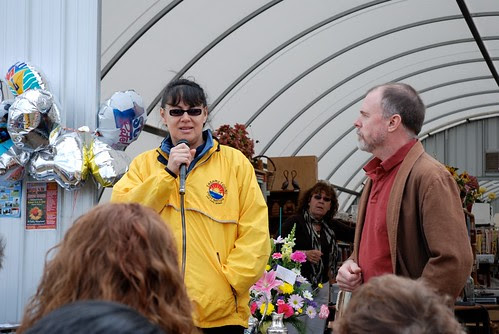 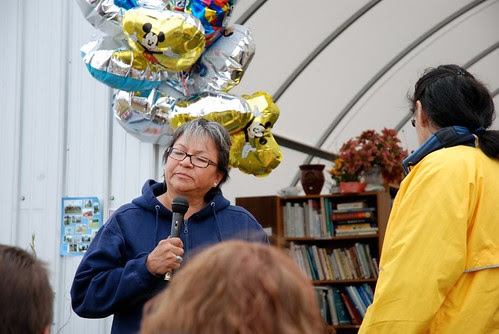 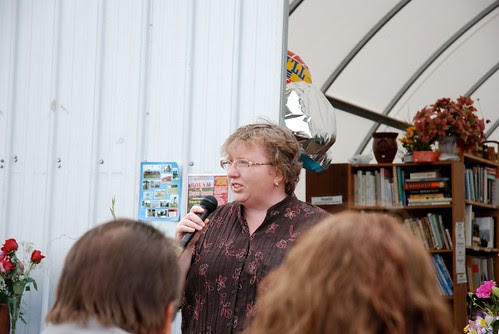 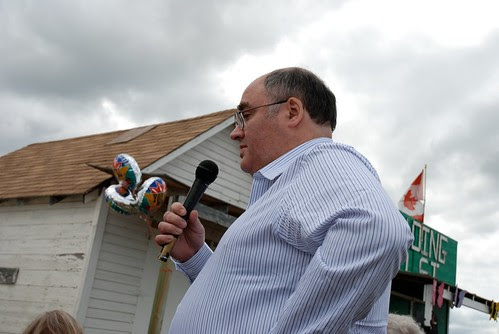 So did some of Liz's friends and neighbors in Alberta: 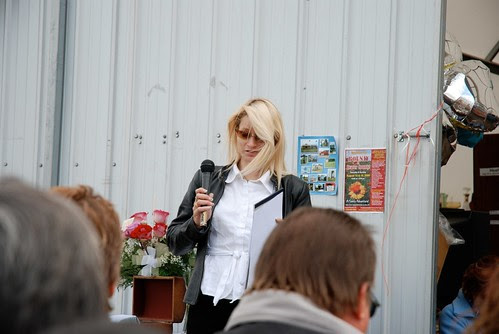 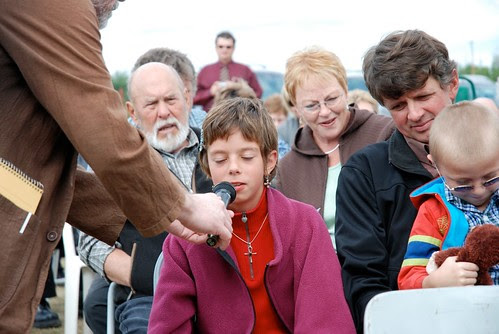 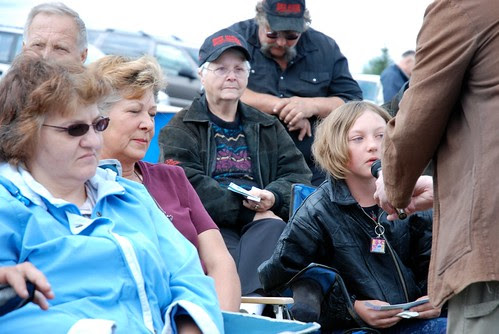 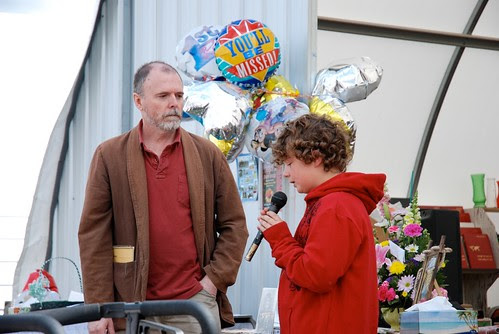 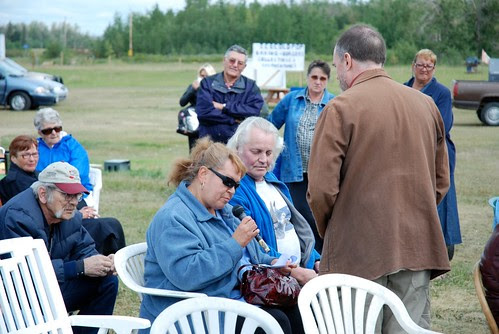 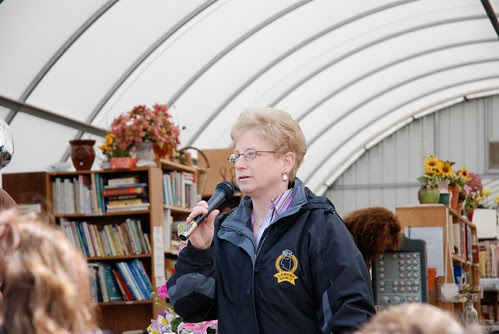 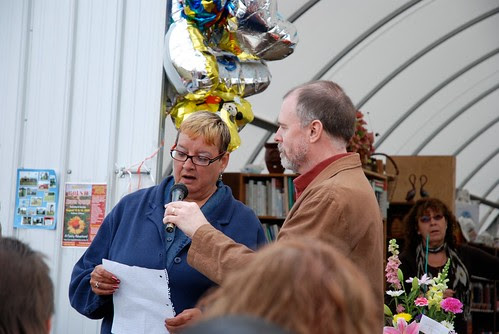 Others sang, or helped beind the scenes, or simply chose silence: 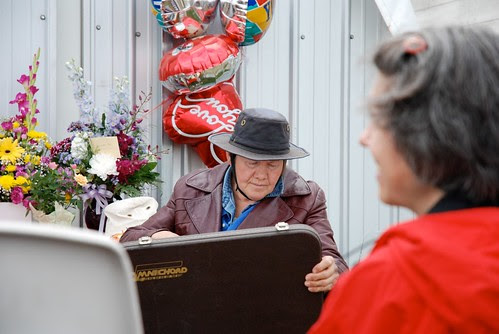 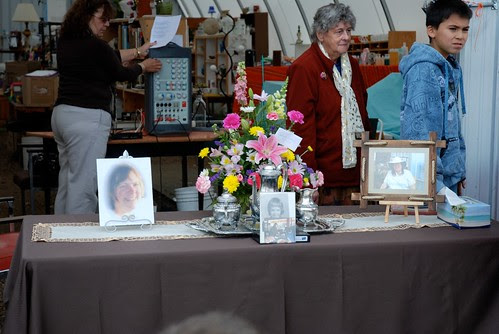 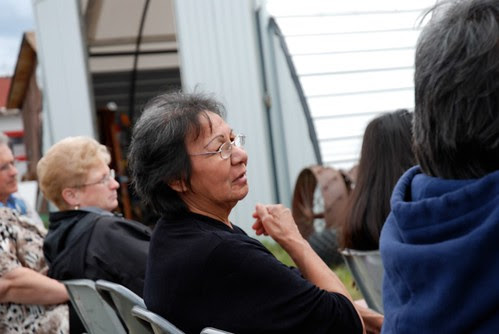 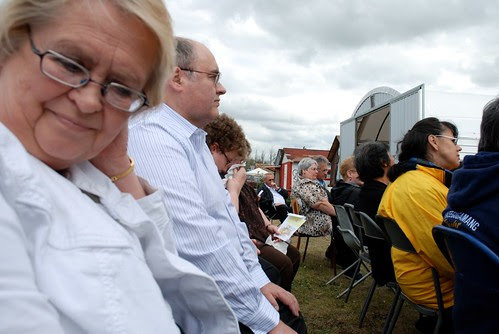 It may've seemed like a strange way to remember someone, but Liz would've approved. 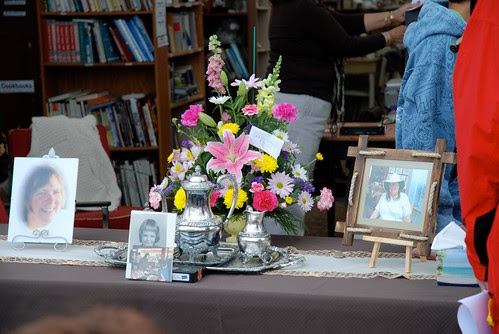 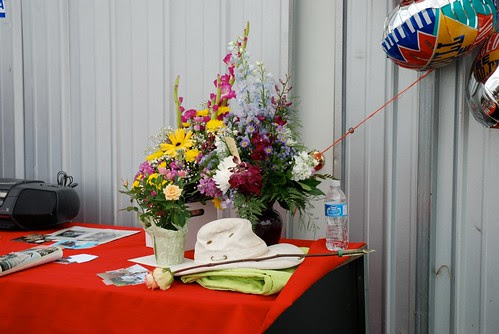 two quotes from the trip

A little background on the second quote: My father is an amazing man in many ways, but when it comes to people's emotional needs, he's clueless. He's heroic at practical needs, which is why so many people love him, but his understanding of emotional needs is so great that he says he doesn't believe in love; he believes in loyalty. After the service, he was being especially clueless. Decades ago, knowing that my father hates the idea of living his last days in a hospital, I decided that should the time come, I would take the responsibility of performing a mercy killing. That day, I was wondering if the mercy killing should be performed a little sooner than I had expected. (Joke. I'm still so funny. But I did make a joke along those lines when Emma, my cousin Wanda, and I were trying to decide what could be done to help my father get a better idea of what my mother needed that day.)

Connie, who lived with my family when they ran a trading post at Rat Rapids, Ontario, and who says she has two mothers, her natural mother and my mom, and one father, my dad, because she didn't know her natural father, was a great help. I told her I wanted to talk to Dad alone, but if I failed, the women should take over. That's when Connie made her observation. She was a very capable teenager when she lived with us; it's no wonder that she's become the chief now.

The talk with Dad went well. But I did warn him the women were ready to come in if necessary, and that didn't hurt the outcome.
at August 18, 2009 No comments:

five things about my sister's memorial

1. The chief of Mishkeegogamang First Nation drove about 25 hours from northern Ontario with her mother, a good friend, and the friend's daughter to be at the memorial.

2. Two more friends drove about as far from the Northwest Territories.

3. My brother and his family drove about two thousand miles from southern New Mexico.

4. I drove from Tucson. Because I was without my beloved navigator (who flew from Minneapolis), I got lost and set a personal best for driving on the second day: at least 950 miles, and maybe a thousand. (Not planning to do anything like that ever again.) (I left Ogden, Utah, made a wrong turn at Butte, and decided to take a stretch of my favorite road, US 89, from Livingston to Great Falls. Ended the night where I had planned, in my favorite motel, the Bluebird in Claresholm, Alberta.)

5. I conducted the memorial service. It was meant as a gift to my mother, but I regret it a tiny bit: I was a little less present than I would've liked because I had to focus on how everyone else was doing. My day for grieving was the day after. I wish we had recordings of what everyone said. The friends who drove great distances were especially poignant, but perhaps the most touching comments were from three children from different families who I had not known, friends of Liz's from the area. Their parents said they had not expected the kids to say anything, but hearing the adults speak, one girl decided to speak, and then another boy and girl did also. It's good to know my sister was loved so very much.
at August 18, 2009 No comments:

This is not a club very many people want to join. While I've appreciated comments from everyone, in some ways, hearing from people who have lost siblings is especially touching. Then my gut reaction isn't along the lines of "Thanks for the sympathy." It's more like, "Oh, man, I'm sorry!"

Ann Vandermeer posted pictures of her sister a few days ago on Facebook. I think I'll do something like that for Liz after the memorial. In the meantime, there are a few pictures of her at the Dogland post I made a while back. This is the canonical one:

The family and friends will gather next week. We're still working out details, changing Emma's ticket so she can meet me in Edmonton, weighing the merits of me driving up or both of us flying for the whole trip, etc. Many phone calls have been made. It's odd how funerals are too often the times we see people we love. I must tell a relative to get married.

Actually, among the coincidences: my nephew Brian got married without telling anyone on the morning Liz died. He's driving up with his new wife and their child, the most adorable two-year old ever.

Mom doesn't remember the exact term the coroner used; she came away thinking it was some sort of heart disease. I have had slightly high cholesterol for the last few years, never so high that the doctor insisted I start taking something for it, but now I will.

I don't think it's a big mystery. I suspect Liz needed to get Mom's signature to add her to the official owners of the new box. But if I was plotting a story, this would have to be significant.

What I really think is it's another example of none of us knowing how much time we have left.
at August 04, 2009 No comments:

another day, another update: Liz

I think the oddest moment occurred yesterday. I was thinking about my parent's situation now, and this thought blipped through my mind: "Thank God Lizzie's up there to look after them. Oh."

I talked to my cousin who has been closest to Mom and Dad, and she agrees that the right thing to do is to follow their wishes about waiting to go up. I called the folks today and got a woman who was cleaning Liz's house. She said Mom and Dad were handling things surprisingly well. I think coping with the immediate problems is an important part of how they're coping with this.

I don't envy anyone doing the cleanup. One of the many ways that Liz and I were opposites is she was a packrat. Her flea market was an excuse to indulge that. There are two large tents like quonset huts filled with the sorts of things you find at swap meets--"flea market" is not a euphemism for an antique business. A blunter name for Liz's business would be that she was a junk dealer, but to her, everything was useful, and it was just a matter of waiting until the right person came along for the right thing.

Whether Liz's business has negative value, I don't know, but a great deal of her collection will probably end up in a landfill now, because she won't have the thirty years she should've had to find the buyer for every unwanted thing she owned.

I don't think anyone's found a will yet. Lizzie lived with cats and dogs. She never married or had children. Alberta law says when people die intestate without spouses or children, everything goes to the parents, and fortunately, Mom and Dad are both able to handle finances, so I'm not worried about that. But I wonder if there's a will, simply because Liz would've had so much fun dividing her possessions.

If you don't have a will, find out what happens if you die intestate, then decide if you're comfortable with that.
at August 02, 2009 No comments: