the racism of anti-racism theorists 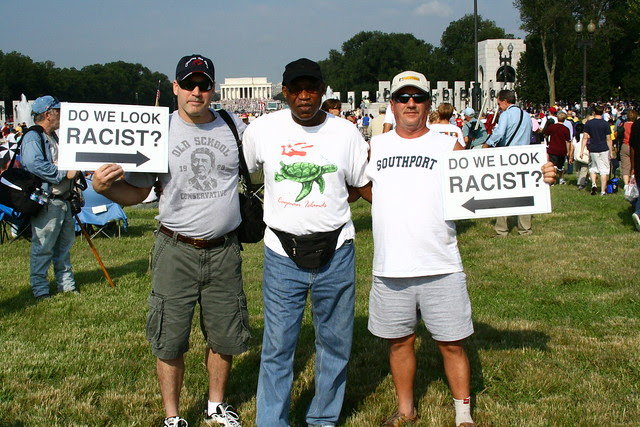 Anti-racists are saying the answer is "Yes!" at Whitey McWhiterson, Sam, And Their Pal Darko Black, Who Is, Ironically, White. They're mocking the guy's fanny pack, perhaps because they think he should be wearing overalls and eating watermelon, or maybe he should have his baseball cap on backwards and his pants fastened below his butt. "Darko Black" seems to be code for "Darkie Negro."

Obligatory line when writing about anti-racists: You can't make this shit up.

Seriously, the people who look racist are at Whitey McWhiterson, Sam, And Their Pal Darko Black, Who Is, Ironically, White. Because only racists expect all black people to be the same. I wish "anti-racist" racists would learn this: Don't mock a black conservative's race. Mock his politics.

P.S. I do think this picture was a stupid way to respond to people who insist the Tea Partiers are racist. The more the Tea Partiers try to defend themselves, the worse they look. They should just ignore the charges. Otherwise, they're feeding the trolls.
Posted by Will Shetterly at 8:52 PM