My uncle and namesake was a pilot killed returning to his base in Italy by "friendly fire". Another uncle was a medic under Patton; he saw Germans shot down as they were trying to surrender, which may have created his alcoholism.

Soldiers are the tools of the rich, and like all tools, when they're useless, they're discarded.
There have never been good wars. There have only been bad peaces.
at May 30, 2011 No comments:

on bullies and bullying

I re-read Elsewhere to write my story for Welcome to Bordertown. I had forgotten that a subplot is about a couple of gay kids getting attacked. It was inspired by gay friends who had been harassed and beaten.

And it was inspired by being bullied. I remember two bullies in particular, both bad students from working class backgrounds. I was a timid kid, bookish and bad at sports, and in sixth grade, I was fat, so I was just about perfect bully bait. The bullying consisted of insults and shoving and hitting, usually where it wouldn't draw blood. Blows to the face were reserved for the rare times I fought back.

Because I spoke up in school for integration and civil rights, the main name I was called by the first bully and his friends was "niggerlover," but I also heard "Shitterly" and "Yankee" and others. I took pride in "niggerlover" because my family had taught me it was right to love everyone, and "Shitterly" only made me pity them because it was so very unimaginative, but "Yankee" hurt. It said I didn't belong, even though I was born in South Carolina and I had lived in Florida since I was four.

My sixth grade bully added "queer" to the mix of insults. In that time, I seemed effeminate: my fashion inspirations were The Man from U.N.C.L.E. (more Ilya Kuryakin than Napoleon Solo) and the Monkees, and I sometimes carried my books in a briefcase that had been my grandfather's. That name didn't bother me, maybe because the earlier insults had taught me that insults are just what people do when they have nothing else to sustain their conviction; it's the most juvenile form of ad hominem.

When I gained some perspective on my life, I forgave my bullies. They never asked for the things that shaped them. 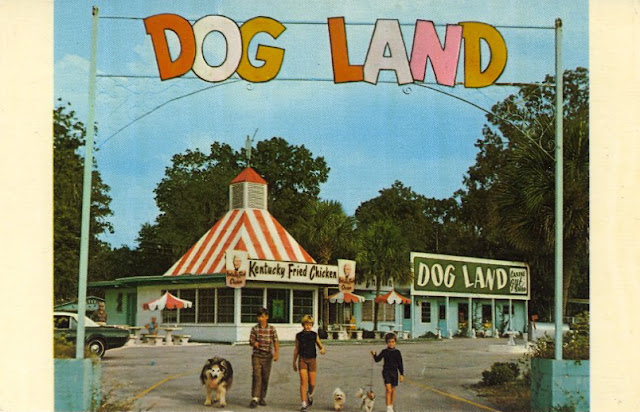 What's bizarre is the three kids don't look quite right. Is that me, Liz, and Mike? I can't figure out why three other kids would be on the front of a postcard, but if that's us, I don't remember any family photos with those haircuts.
ETA: I think that's Jody Fletcher and Rene Bell with Liz on the right. Jody and Rene's parents worked for us.
at March 21, 2011 No comments:

Can you guess that I'm visiting my mother-in-law's home? I love her, and I like her home, but she has lived like a middleclass American in the vague US suburban sense for most of her adult life. Now that her health requires a change in her living circumstances, I'm very aware of all the things she has that she can't take care of.If you have more than you can take care of by yourself, you have too much.
at February 17, 2011 No comments: