the high cost of policing the world

Okay, "the high cost of the US empire" is more accurate, but people who argue about whether we have an empire will agree that we spend a lot of money policing the world. Case in point, an article by a conservative: RIDICULOUS MILITARY SPENDING: 12 Facts That Show America Can't Afford To Police The World Anymore.

That inspired me to google a few facts about the US military budget.

From Military budget of the United States - Wikipedia:

The 2009 U.S. military budget accounts for approximately 40% of global arms spending and is over six times larger than the military budget of China (compared at the nominal US dollar/ Renminbi rate, not the PPP rate). The United States and its close allies are responsible for two-thirds to three-quarters of the world's military spending (of which, in turn, the U.S. is responsible for the majority).[25][26][27]
In 2005, the United States spent 4.06% of its GDP on its military (considering only basic Department of Defense budget spending), more than France's 2.6% and less than Saudi Arabia's 10%.[28] This is historically low for the United States since it peaked in 1944 at 37.8% of GDP (it reached the lowest point of 3.0% in 1999–2001). Even during the peak of theVietnam War the percentage reached a high of 9.4% in 1968.[29] 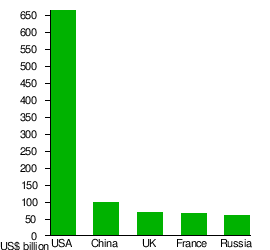 The world's top 5 largest military budgets in 2009. Figures sourced from SIPRI.
Also interesting: Center for Arms Control and Non-Proliferation: U.S. vs. Global Defense Spending
Posted by Will Shetterly at 8:10 AM