the Angry Black Woman's misinformation about Rosie the Riveter

I followed a link to the Angry Black Woman's series of pictures of attractive black women which she posted to refute some idiot's claim that black women are unattractive. The pics are swell, but there's a glaring error. In The Real Riveter (Her Name Might Be Rosie…), she suggests the original Rosie the Riveter was black, and a commenter agrees by saying, "Yes, Rosie *was* a sister."

It's true that Rosie was a sister, but it's only in the way that all working folks are kin. Here's a pic of two black Rosies that I love from The Pop History Dig » “Rosie The Riveter”1941-1945: 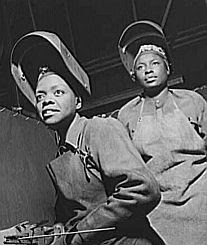 And here're two more Rosies who were partners on the assembly line: 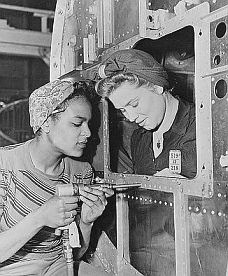 Here's a bit from the article:

Sybil Lewis, an African-American riveter who worked for Lockheed Aircraft in Los Angeles, would later provide this description of women riveters:

“The women worked in pairs. I was the riveter and this big, strong, white girl from a cotton farm in Arkansas worked as the bucker. The riveter used a gun to shoot rivets through the metal and fasten it together. The bucker used a bucking bar on the other side of the metal to smooth out the rivets. Bucking was harder than shooting rivets; it required more muscle. Riveting required more skill.”

And if you do even the least bit of googling, you can find lots of pictures of Rosies who were white. Poor working women have always come in all hues. True fact: Marilyn Monroe was a Rosie.

If you want some black pride to connect to Rosie the Riveter, the group that made the song famous, the Four Vagabonds, was black:

(There's at least one mistake in the subtitles. Here are the actual lyrics:

While other girls attend their fav’rite
cocktail bar
Sipping Martinis, munching caviar
There’s a girl who’s really putting
them to shame
Rosie is her name

All the day long whether rain or shine
She’s a part of the assembly line
She’s making history,
working for victory
Rosie the Riveter
Keeps a sharp lookout for sabotage
Sitting up there on the fuselage
That little frail can do more than a
male will do
Rosie the Riveter

Rosie’s got a boyfriend, Charlie
Charlie, he’s a Marine
Rosie is protecting Charlie
Working overtime on the
riveting machine
When they gave her a production “E”
She was as proud as a girl could be
There’s something true about
Red, white, and blue about
Rosie the Riveter

Everyone stops to admire the scene
Rosie at work on the B-Nineteen
She’s never twittery, nervous or jittery
Rosie the Riveter
What if she’s smeared full of
oil and grease
Doing her bit for the old Lendlease
She keeps the gang around
They love to hang around
Rosie the Riveter

Rosie buys a lot of war bonds
That girl really has sense
Wishes she could purchase
more bonds
Putting all her cash into national
defense
Senator Jones who is “in the know”
Shouted these words on the radio
Berlin will hear about
Moscow will cheer about
Rosie the Riveter!