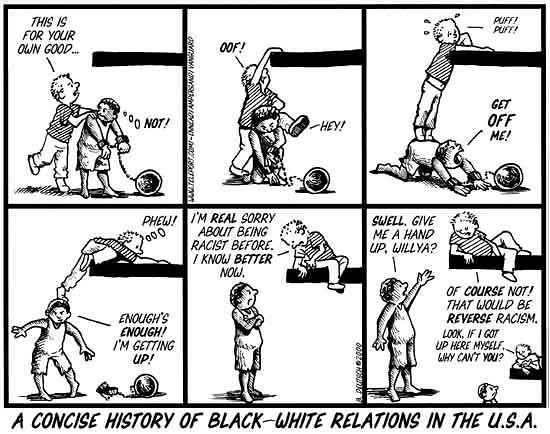 It's by Barry Deutsch of Amptoons fame. I think it has a lot of truth in what it says about rich white conservatives, but the last panel hints at something that should make anti-racists wince: their philosophy doesn't offer any help to poor blacks either.

Anti-racists aren't in favor reparations, perhaps because reparations raise the next question: if generational poverty applies to one group, why doesn't it apply to all?

They're not in favor of redistributing wealth—that would be communism, and anti-racists tend to be rich folks whose idea of justice preserves the privileges of the upper classes, but seeks to make the class system racially proportionate.

So, what am I missing?

Hmm. I may see the answer: the cartoon assumes all white people got ahead thanks to blacks being in slavery. It omits the Africans who sold slaves and the black Americans who became slave owners. It leaves out the poor whites who were also used by the rich in their efforts to become richer. So anti-racists may like this because the first panel reinforces their world view, and the question that the last panel raises for me slips past them entirely.

Still, if anyone can tell me what anti-racism offers as a solution to black poverty, I'd be grateful.
Posted by Will Shetterly at 3:22 PM

Email ThisBlogThis!Share to TwitterShare to FacebookShare to Pinterest
Labels: cartoon