via The Pictorial Arts: Soldier Girls, some Adelitas: 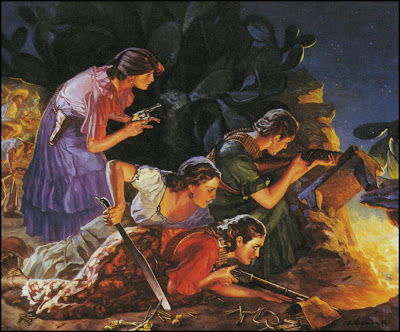 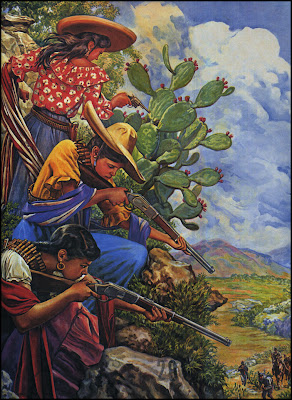 via Credit Unions Pros, Cons
Posted by Will Shetterly at 10:10 AM 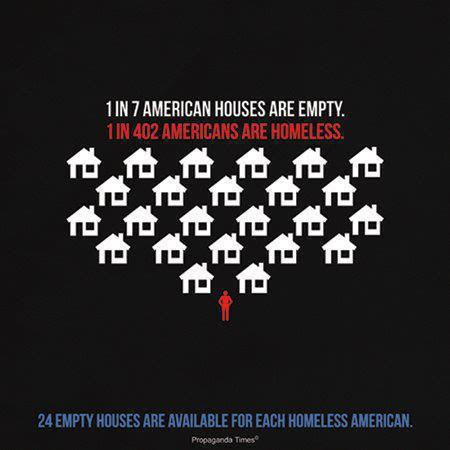 "One practical problem with violent resistance is that the state, being founded on violence, is almost always better at it." —Dave Trowbridge
Posted by Will Shetterly at 11:31 AM

Email ThisBlogThis!Share to TwitterShare to FacebookShare to Pinterest
Labels: quote

flyover or drivethrough country? a little about class and air travel

Note: This is a follow-up to flying versus driving, with a note about the flying class.

When I was a kid, people talked about the jet set: the ability to fly when and where you pleased was an obvious class marker. But by the end of the '60s, the middle classes flew more often, and "jet set" had fallen out of fashion, as if a Henry Ford of flight had given air travel to the people.

My first clue that wasn't so came in the late '70s, when I flew from New York City to visit my parents. I had a stopover in Toronto, and I felt uncomfortable there. I wondered if it was because the airport seemed like something out of 2001: A Space Odyssey. When I boarded, I got my answer. A First Nations family came into the cabin, and something in the attitudes of other passengers changed. Everyone I had seen in the airport until then had been white and, to use a class euphemism, "well-dressed". The Indian family, with brown skin and blue jeans, was neither.

I can't remember when I first heard one of America's great snob terms, flyover country. But I eventually realized it was the perfect metaphor for how the rich deal with us: they fly over us. In the last decade, I learned about how much pollution they crap on us as they fly over. That metaphor only improved when I lived in Bisbee and had the chance to see buzzard shit on my car.

A friend on G+ objected to my referring to "the flying class", so I did a cursory google. The links are British, but once you look past the nobility, their class system and the US's are remarkably similar, right down to social mobility.

Who Flies? Who Pays?: "Only about five percent of the world population has ever flown. This minority, which flies more and more often, lives mostly in industrialized countries. The consequences of climate change, however, primarily affect those who have contributed little to it, i.e. people in developing countries."

George Monbiot, Heat - Extract and Comments | JustEarth: "Monbiot dismisses the argument that cheap flights are “socially inclusive,” enabling poorer people to fly, pointing out that people in the lowest two social classes take only 6% of cheap flights, as they can’t afford even them, that 75% of those who use budget airlines are in the top three social classes (p. 177). People with secondary residences take an average of six return flights a year to use them. Those who are the “most vulnerable to climate change are the poorest inhabitants of the poorest nations, the great majority of whom will never board an aeroplane” (p. 178)."

STOP the Expansion of Exeter Airport - The Case Against:

The air travel industry often argues that cheap air travel stops the elitist situation in the past where only the rich enjoyed the privilege of flying. Interestingly recent trends show that air travel remains the preserve of the wealthy.

It’s still the case that the overwhelming majority of people that fly come from the higher socio-economic groups. Indeed the growth of air travel has widened inequalities between income and social groups and not narrowed them.

Figures from the Civil Aviation Authority, published in 2004 reinforce these trends. Those in social groups D and E (27% of the population) took only 6% of flights in 2003.

Easyjet themselves have confirmed that the rapid growth in budget airlines is being fuelled by people with very high disposable incomes who book dozens of trips a year: "We have at least 1,000 people who fly every week from London to their second homes in Nice, Malaga, Palma and Barcelona", a spokesman said, "There is a misconception that budget airlines are used mainly by people on lower incomes. If you look in the airport car parks you will find them full of BMWs and Mercedes."

Air travel is still a luxury only enjoyed by the privileged elite.

Plane Stupid - 10 reasons to ground jet air travel: "It’s the rich who are really benefiting from the artificially low prices of air travel. The average income of people using Stansted Airport is £47,000 per year – and it’s supposed to be a budget airport! Low-skilled people and people on benefits, despite making up a quarter of the population, only took 6% of the flights whilst the top quarter of the population took almost half of all flights. (Civil Aviation Authority) Indeed, 75% of those who use budget airlines are in social classes A, B and C with people with second homes abroad taking an average of six return flights a year. Most of the growth, the government envisages, will take place among the wealthiest 10%. (Monbiot, The Guardian, 28.02.06)"
Posted by Will Shetterly at 10:48 AM

dead saguaros, an Adelita, and some Arizona landscapes

I rarely take a comera on my walks. I remember Fred Haskell, a fine photographer, once saying that he could be at an event or he could record it, and when I walk, I either want to be present or half-dreaming. But today I thought I'd take pics of some things I would like to remember.
This is an Adelita that we put by the wash that runs through the place where we're caretakers. 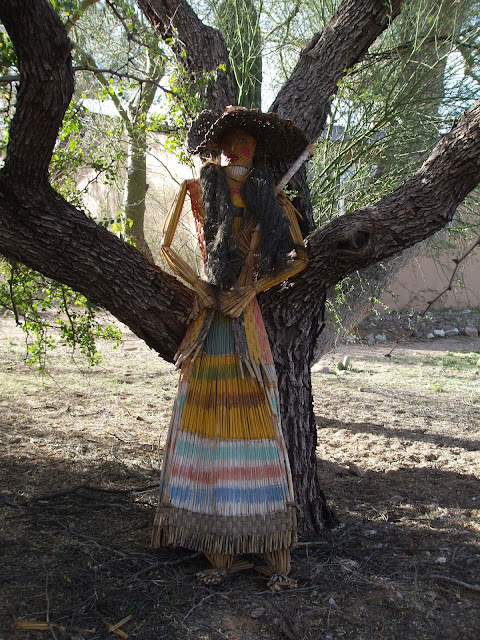 The splayed ribs of this dying saguaro inspired me to bring the camera: 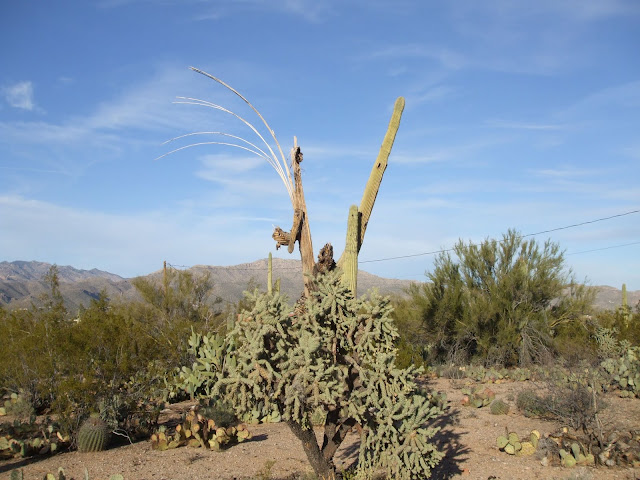 I wish I'd had it last night, when I saw the saguaro at sunset, and a bird was sitting on the second arc from the bottom, with its tail coming down to the lowest arc.

Here are some vistas and a few more dead saguaros: 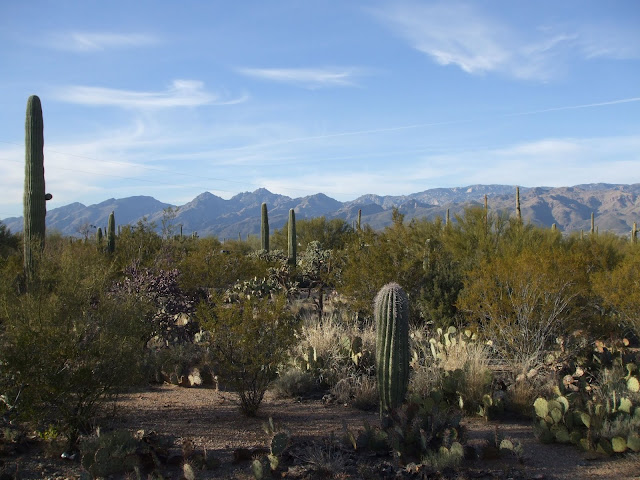 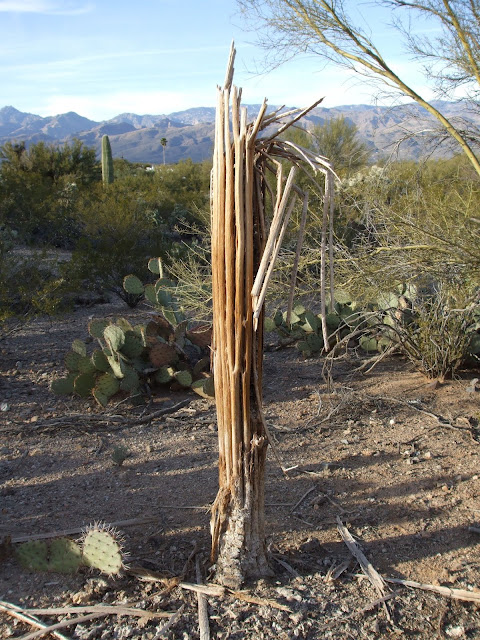 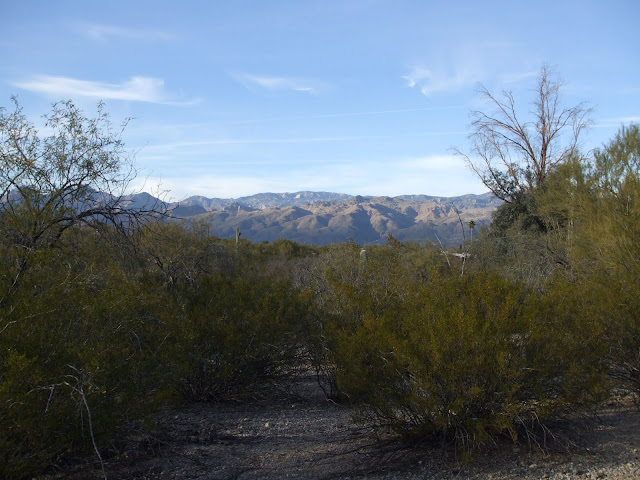 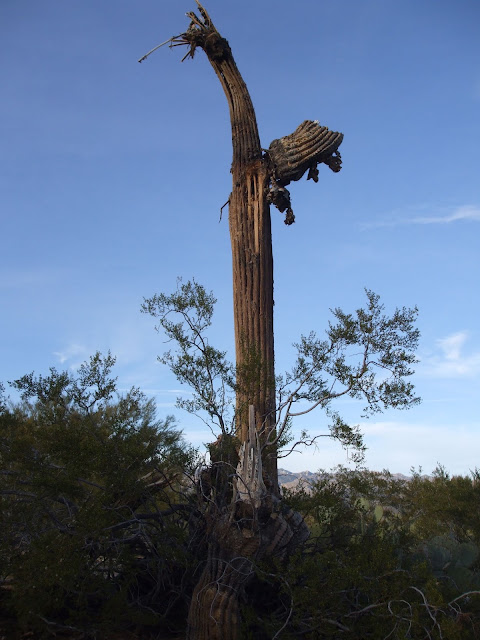 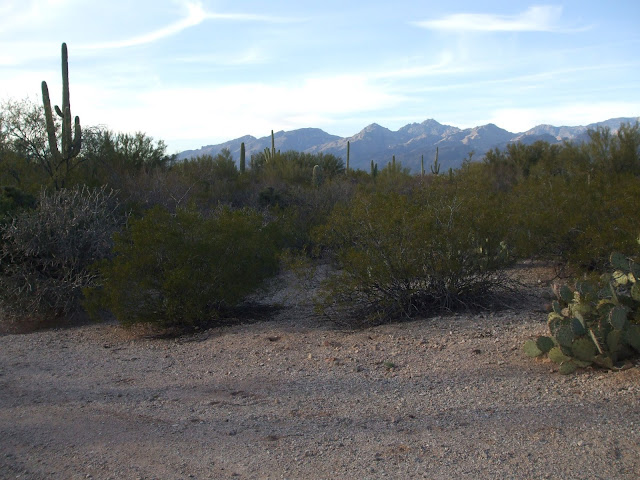 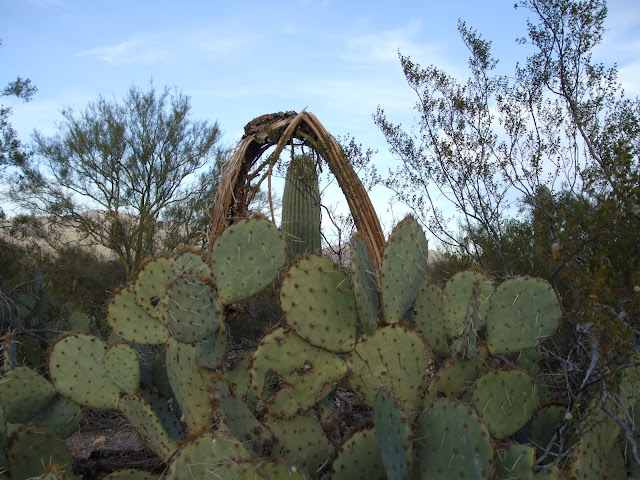 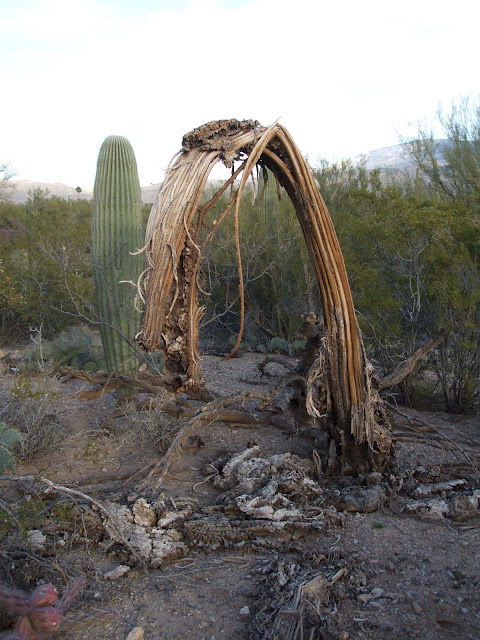 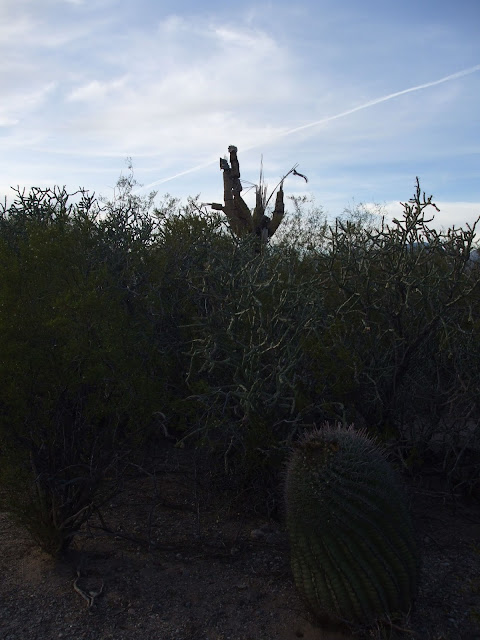 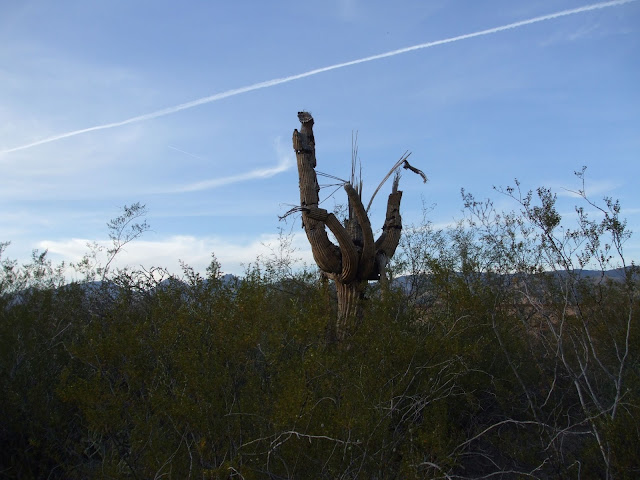 Arizona, I'm going to miss you, even though your rich people are crazy.

Posted by Will Shetterly at 7:43 PM

flying versus driving, with a note about the flying class

I like Fly or Drive Calculator™ 'cause they let you plug in the obvious variables (cost of hotel, make of car, etc.) and include the CO2 impact. Here's Tucson to Minneapolis for two people:


The pollution caused by rich folks who fly a lot? It's just more trickling down on the rest of us.

ETA: Kee Hinckley noted, "Having a second person makes a big difference in the equation, both for cost of flying and ease of driving. I'm going for a weekend to Michigan (about a 16hr drive) to see my daughters senior HS art installation project and that app confirms my guess. Cheaper (and more CO2 efficient) to fly."

That's another reason I like the site. Sometimes flying is the right solution.
Posted by Will Shetterly at 11:52 AM

Email ThisBlogThis!Share to TwitterShare to FacebookShare to Pinterest
Labels: class

we're moving to Minneapolis at the end of the month! (but watch for updates)

Our realtor pal told us yet another problem had come up, and then that all the problems had been solved, so "we are back on track". Yay!

Given our home-buying adventures so far (see yesterday's post), I'm not assuming we're really moving until the cats are asleep on our bed at the new place. We do a walk-through on the morning of the closing, and I'm fully prepared for the fates to laugh at human plans then.

Still, we're excited. The place seems ideal for us in many ways: It's in our old neighborhood, within an easy walk of a light rail station. It's small, about 750 square feet, so it'll be easy to clean and cheap to heat. It's in decent shape for moving in, but it needs some work, so we can shape it to suit us over the next couple of years.

It feels good to be going, but I'm going to miss the desert and the mountains and many fine Arizonans.
Posted by Will Shetterly at 6:21 PM

the Schrodingers are moving to Minneapolis

In a couple of weeks, we're moving back to Minneapolis. Or not.

Our story so far:

Thanks to two awful things—my sister's heart attack and the collapse of the US's housing bubble—Emma and I have enough money to buy a small home in a working-class neighborhood in some cities. Alas, that doesn't include Los Angeles, or we would happily go back there. We love our current abode in Arizona where we've been caretakers, but it's a bit isolated, and at heart, Emma and I are city folk who love the country, not vice versa.

Two of our favorite cities, Tucson and Minneapolis, were both hit hard by the housing collapse, so we've been studying them closely. Despite the cold, Minneapolis edged out Tucson in a couple of areas: proximity to Emma's family and a light rail system.

So we put an offer in for a house there a few months ago. We dickered with the bank until they gave a verbal agreement for the price we wanted to pay—and that evening, we heard that a new buyer was prepared to pay more than we could.

Which made us think the fates wanted us in Tucson. But on the very day that we were looking there, we got a call from our realtor pal in Minneapolis about another house that might please us.

The fast version: it did, we offered, they accepted. But this house is a short sale, meaning several people have claims on it and all have to sign off, a process that takes a month or two. We waited patiently. Last week, the papers seemed to have cleared. We paid for an inspection—and the basement was extremely damp. Which would call for putting in a drainage system. Which would cost more than we hoped to spend.

But it turned out the seller had come by that morning to turn the water on for the inspection, and the faucet had broken, soaking the basement. The inspector returned a couple of days later, and all looked good.

Time to celebrate? We thought so. I reserved a moving container from a shipping company this morning.

And I just got this email from our realtor pal: "the title work indicates that there are some judgments against the sellers that will have to be dealt with. I hope this does not become a problem for us."

So, uh, we're moving in a couple of weeks. Or later. To Minneapolis. Or Tucson. Or elsewhere.

I ain't asking for commiseration—I wish everyone without hope of a home had our problems. This is just an explanation of why, sometime soon, we may announce with little warning that we're moving.

ETA: Under "God plots like a bad writer sometimes": we heard that our offer on the current house had been accepted on the same day we heard my mother had died.

Also, this post could've been written up as "The Xenos are moving..."
Posted by Will Shetterly at 10:10 PM