Class, Race, Fandom, and Dr. Who 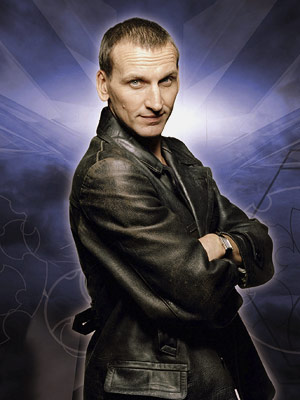 Dr.Who is a BBC TV show that's run, off and on, since the 1960s. The Doctor reincarnates whenever a new actor takes over the role—so far, all the Doctors have been white, male, British, and vaguely middle-to-upper class.

Christopher Eccleston is known to fans as the Ninth Doctor. I loved him because his incarnation of the Doctor, with a Northern English accent and a black leather jacket, evokes the working class. Some people didn't like him for that reason; a snobbish Guardian writer refers to Eccleston's Doctor as "looking like an EastEnders extra".

The Doctor is traditionally accompanied by a companion or two, the show's Watsons. My favorite, Billie Piper's very working-class Rose Tyler, began with Eccleston and continued when David Tennant  became the Doctor's tenth incarnation. You may argue whether the Ninth Doctor's working class status was a matter of sympathy or identity—though he was reborn in a new human form, he was still a Time Lord—but Rose Tyler was, in the words of the actress who played her, "a bit of a chav." (The show made that explicit when Rose, possessed by an alien intelligence, looked in a mirror and exclaimed, "Oh my god! I'm a chav!") 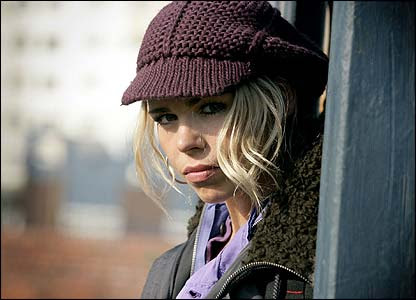 Many fans saw what that Guardian writer missed. Backword Dave at “The new Doctor Who” at A Fistful of Euros noted:


Both Rose and the Doctor seem to be “working class.” So far they’ve stood up for enslaved corporate hacks against unnamed bankers, overthrown a despotic billionaire who considered his staff “disposable,” supported an honest (and Labour seeming) MP against a corrupt system, visited a Victorian funeral parlour (where the most likeable characters were a maid and Charles Dickens). In the second episode, the sympathetic character was some kind of maintenance worker, and in episode 1, Rose worked in a department store. Where is the middle classness?

The white Rose Tyler had a black boyfriend, Mickey Smith, who could be considered a companion, but his part wasn't as important as Rose's. The first major black character in Doctor Who was Piper's successor, Freema Agyeman, who played Martha Jones, a middle class medical student. 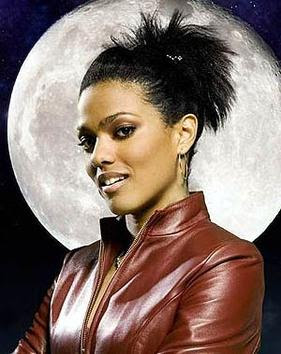 Just as Rose was an excuse to acknowledge class issues, Martha was an opportunity to explore race. How well the writers did depends on who you ask.

Now, the Doctor always reincarnating as a white male has bugged me for ages. Whoopi Goldberg hinted decades ago that she would love the part, and she should've had it. Or if the producers insisted on someone male and British, Lenny Henry would've been great, as he proved in a spoof in 1985.


But when people talk about race and Dr. Who, they focus on Martha and especially on a scene from "Human Nature": Martha, who had been pretending to be the Doctor's housemaid in 1913, tries to convince an upper-class Brit that she's from the future:


MARTHA: I'm training to be a doctor. Not an alien doctor, a proper doctor. A doctor of medicine.

JOAN: Well that certainly is nonsense. Women might train to be doctors, but hardly a skivvy and hardly one of your color.

It's a brilliant scene. The comment about "hardly a skivvy and hardly one of your color" tackles race and class simultaneously: To an upper-class Brit in 1913, being a doctor isn't for the working class, and it's especially not for brown-skinned members of that class.

But some of scifi fandom's Critical Race Theorists hate that scene. K. Tempest Bradford denounced it on a Tumblr page. then accused its writer, Paul Cornell, of "unintentional" racism at “Let’s Talk About Human Nature”, where she also complained about the Doctor getting to pass as a teacher, while Martha had to be a servant.

2. In this story, the middle-class Martha has accepted a working-class role to avoid calling attention to herself. Martha’s predecessor, Rose, wore a maid’s costume at least once; the Doctors companions have often passed themselves off as servants, I suspect. 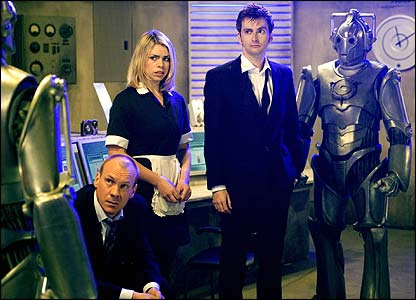 What fascinates me about the discussion is that no one at Tumblr said a word about class, nor did Bradford at her blog.

...the question is, do we have everyone in (upper class, somewhat sheltered) 1914 be portrayed as absolutely non-racist, or do we note the possibility? I hate it when series set in the past ignore the racism of previous eras to extraordinary degrees. (To not have Martha hammered with it *every time* she sets foot in the past was, though, I think, the right decision.) I think it airbrushes the suffering of individuals back then out of history, by implicitly saying things were always all right. However, as you’re in the group portrayed here, I think your voice should have weight, and I don’t want to push it aside through my own privilege. It’d be really good if we could manage to have the (perhaps first ever) caring, dignified chat about race in the series. Mainly because I’m an enormous wuss and if it gets heated I could well disgrace myself with the wailing and the sobbing.

What Cornell missed with his "you're in the group portrayed here" is Bradford is not, because there's not a united black race. Bradford is a middle class fan whose Angry Black Woman blog excludes class from its concerns. She once said, "I rarely mention class because it’s not an issue I’m particularly familiar with." It's no surprise that in the conversation with Cornell, she continued to ignore class.

Cornell did not. He said:

I think it’s clear that, in some ways, we simply let you down, and I’m sorry about that. Some of this stuff one just can’t argue with, really. Back then we saw ‘chosen by the Tardis’ as a more poetic way of saying ‘by a roll of the dice’, but yes, it’s our choices that mattered. As a British person, the idea that in 1914 Joan would have known about women of colour being doctors feels very strange to me. That sort of cultural information would have been hard to come by (people of her class would have been surprised by that, I think, up until the 1950s, some much later), and I don’t think it’s a stretch at all to assume her ignorance. Correct me if I’m wrong, but I think one of the reasons the text is problematic for you is that you feel kicked by the heroine expressing such things. The way institutional bigotries touch good people (because I think it’s important to be able to acknowledge one’s own racism, so I also think it’s important to show racism as a flaw in otherwise positive characters) is a theme in my work. I’ve read the Butler, which is, as you say, the best sort of SF.

I will have to defer to historians on this one, because I admit I don’t know.

Despite acknowledging her ignorance, Bradford didn't change her mind. At Tumblr, she said:

Having a discussion with Paul Cornell about this episode over on my blog. I’m realizing again (always have to re-realize this stuff) how some people just do not see the world the same way as others. They just don’t fathom how everything in this episode is just… arg.

To people like Bradford who care only about the depiction of race, class and history are always irrelevant.

I can suggest answers to her plot complaints, though whether my explanations are implied by the script or are only fan-spackling, I don't know. She says:

People have pointed out that the Doctor did not choose the time and place, the TARDIS dd. Well, TARDIS: wtf? Still not okay. ... In the world of the show that is bad enough. But I find it to be handwavy and bull on the part of the writer/creators/whoever came up with this idea. It looks like they’re trying to absolve the Doctor of responsibility here, and that’s a dick way to do so. Plus, it doesn’t fly for the TARDIS, either, as it’s been well established by this point that it has a consciousness, too.

1. Having the Tardis rather than the Doctor choose a time and place at random seems like a good plan if you're trying to hide from creatures who can travel in time and space.

2. Throughout the show's history, the Tardis has been presented as slightly damaged and not completely dependable. Maybe it goofed up when it chose 1913 Britain.

3. A time-traveling vehicle with an alien consciousness might not know or care to avoid sending Martha to any place with a history of racism. That choice would rule out Martha visiting much of Europe and the Americas after slavery in those places was restricted to one race.

4. The Tardis may have thought the Doctor's pursuers would never think they would hide in a racist time. If so, it was being considerate in sending them to 1913 Britain rather than the Antebellum South or Britain before 1833.

It’s yet another example in a long list of examples where Martha is put into the Mammy role. I might have let it slide except it happens so often it’s a damn theme, and that’s really problematic.

It's actually another example of companions put in servant roles. Did anyone complain when the working class Rose Tyler was put into a maid's role?

For these critics of the handling of Martha Jones, the question doesn't seem to be whether the stories accurately present prevailing attitudes toward race and class. The question is whether it's racist for a middle-class black woman to visit a time where black women are assumed to be working class. That Martha is heroic isn't doubted; she's a much-loved character in Who fandom. I think her fans who wanted her written differently are missing something the writers know: part of her heroism comes from confronting racism. She could have been written like Star Trek's Uhura and only visited post-racial and non-racial places. That would have been a valid choice of the writers.

But it would have meant keeping her out of the last five hundred years of history where English was spoken.

Or it would have meant ignoring racism in those times.

Good writers know a truth about storytelling that fans don't: A writer's job isn't to give fans what they want. It's to give them what they need. If fans are upset because a beloved character faces hard realities, their upset may only be a sign that the writers are doing their job well.
Posted by Will Shetterly at 6:47 AM