about Cats Have No Lord 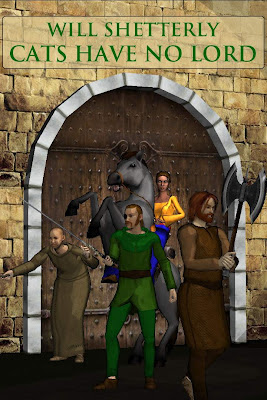 Cats Have No Lord is my first novel. I had tried to write several more ambitious—meaning, more pretentious—books and gave up on them because they were awful, so I finally decided to learn how to write by writing something with everything I'd loved as a kid. If I missed any fantasy cliches of the '70s, I don't know what they were: this book has a spunky female thief, a mysterious swordsman, a magician, and a big barbarian. Oh, and a talking horse.

It sounds awful, but my love must've shown through, or maybe readers were more desperate or more kind in those days. Booklist said, "The first-rate world building, the unique cast of characters, and the author's clever whimsey make it absorbing reading. Recommended."

"Unique" must mean they thought I did good things with the characters, but every single one began with a trip through Central Casting to see who was available. Literally. I wrote the first draft of the first four chapters without a clue where I was going. I just thought, "I need a cool swordsman," and wrote a chapter. Then I thought, "He needs sidekicks," and wrote the big barbarian's chapter, then the magician's, and finally the love interest's. But something happened that I hadn't expected in what was originally the fourth chapter. I gave her a telepathic horse because she needed someone to talk to, and the two of them stole the show

So I began again with Lizelle and Darkwind as the stars, and made Catseye, Thraas, and Merry their sidekicks, and soon my first novel was done. I wrote an odd prequel to it a couple of years later. I really should write a proper sequel someday, because I still love those characters.

I've put the book back in print. The CreateSpace page, where I get the biggest share of the cover price, is here: Cats Have No Lord. It'll also show up sometime soon at Amazon and other "discerning booksellers."

The ebook's also available from discerning ebooksellers for $2.99:

Amazon.com: Cats Have No Lord

BARNES & NOBLE | Cats Have No Lord

Smashwords — Cats Have No Lord
Posted by Will Shetterly at 9:19 AM