point of view fixes everything #1

The Fourth Street Fantasy Convention had a good panel called "point of view fixes everything," but the panelists forgot to mention the most basic reason why thinking about POV is useful for a writer:

Point of view tells you where to start and stop a scene or a story. The essential questions:

Consider a murder mystery. You have three obvious POV choices at the beginning: the victim, the murderer, and the detective. Those aren't your only choices—you might start with the person who finds the body, or the coroner who discovers an interesting fact about the body, or anyone whose first experience with the case is interesting—but those are the obvious ones.

The character with the most interesting POV and the most important character in the story are not necessarily the same: Sherlock Holmes is the protagonist, but Watson is the better POV character because Watson's a more complex character than Holmes, who is brilliant, but broken and monomaniacal in a way that's more interesting when seen from the POV of Watson, who loves and admires him.

never trust the narrator: notes for an essay

This is a bit from Elsewhere that some readers misunderstand:

"There's a bookstore? In Bordertown?"
She nodded. "Several. There's everything you want in Bordertown. There just isn't everything you need." She grinned. "I'm Mickey. The store's Elsewhere. Hours are as erratic as you can imagine, but word gets out when we're open. A few blocks south of Ho on Mock Avenue."
"I'm Ron. Ron Starbuck."
She lifted an eyebrow. "One kid showed up in Soho, said her name was Jinian L'Étoile. Everyone called her Jiggle Le Toilet. She cut out for the World after a week. I'm amazed she lasted that long."
"Check," I said. "Just Ron."
"Good to meet you, Just Ron."

If you check my reviews, you'll notice that some refer to that character as Ron Starbuck, because they trust the narrator. He goes by several names in the book. His real last name isn't mentioned until the sequel: It's Vasquez.

I didn't expect anyone to believe Starbuck was his last name. I chose it because it sounded like the kind of name a kid would make up for himself, and I thought readers would figure out from "said her name was" rather than "whose name was" that it was common to create new identities in Bordertown.

But I forgot that readers tend to trust narrators. Often, they're right to, but I find completely trustworthy narrators both boring and implausible: none of us are fully self-aware. Some narrators lie to hide something when they tell a story. Others think they know the truth and are wrong.

I've never done much with unreliable narrators, but when I read, I try to remember that anything a narrator says should be weighed against what we learn later.

Hmm. I'm being unreliable here, I just realized. The narrator of Dogland is unreliable, and readers who miss that miss the presence of magic in the book.
at June 22, 2012 No comments:

So, we did a second radon test, which came back with a lower level than the first test but still above what's recommended, so we asked a friend for a recommendation, then contacted Radon Removal, who provided us with this: 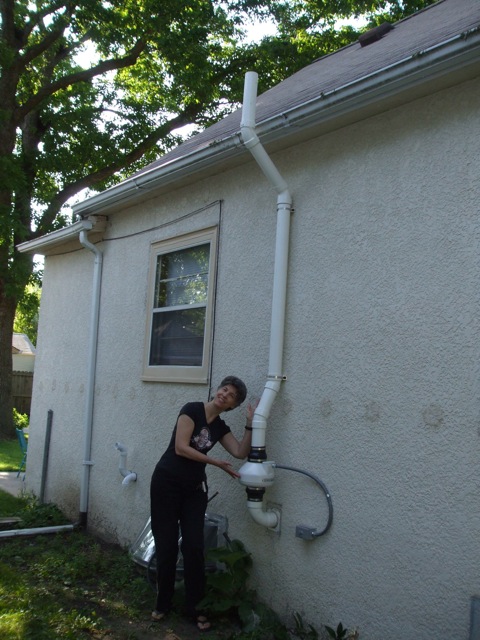 My lovely assistant is gesturing toward the fan, which runs constantly and is very quiet. With some houses, they're able to run the chimney inside the house and put the fan in an attic or a closet, but our house is very small and there simply wasn't an inconspicuous place inside.

Here you can see the pipe in the basement, next to our furnace. 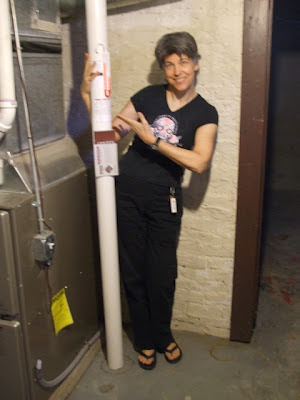 And here's where it goes into the floor. They drill through the floor, suck out some dirt and sand, then seal in the pipe, which draws radon from beneath the house. 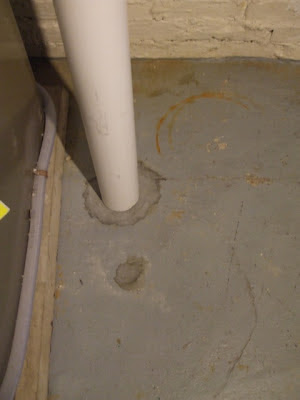 The cost was $1375, and the installers were fast and friendly, so we're pleased. I've mailed off the follow-up test to see just how much of a difference this'll make. I'll post that when it arrives.
at June 13, 2012 No comments:

two headstones for Mom, or the curious business of death

Half a century ago, my mother's parents bought a piece of a cemetery in their home town in northern Minnesota. I'm not sure how many grave sites they bought—my guess is eight or twelve. I think they imagined their descendants returning in death to gather for eternity.

My brother and his family have lived in New Mexico for decades. They're part of a church there. They have no reason to transport their bodies or ashes thousands of miles to be buried in a place they never loved.

Emma and I are back in Minneapolis, and my instructions for my body are simple: whatever Emma wants to do. I've always admired the Zoroastrian Towers of Silence and American Indian burial platforms. I'd kind of like to be stuffed and placed by the door where I could hold coats and umbrellas at parties, but the cost wouldn't be worth the joke. Burn me, bury me, scatter me, stuff me, or leave me to rot where I won't inconvenience anyone—it's all good. If my spirit will linger anywhere, it'll be somewhere more interesting than the last bits of my body.

These are my grandparents' graves in Minnesota: 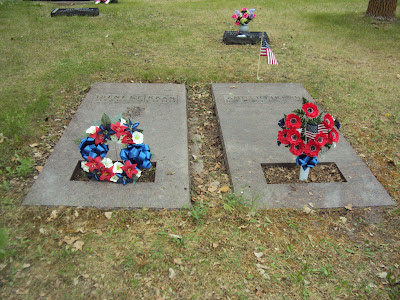 Mom used to talk about donating her body to science, but she mentioned that less often in later years. When my sister died suddenly, they buried her ashes in a small country graveyard near her farm in Manitoba. Mom decided to be buried next to Liz, and Dad, who, I suspect, wanted to die at sea in a storm and never found a storm strong enough to kill him,  has agreed to be buried with them. Currently, half of Mom's ashes are buried by this marker: 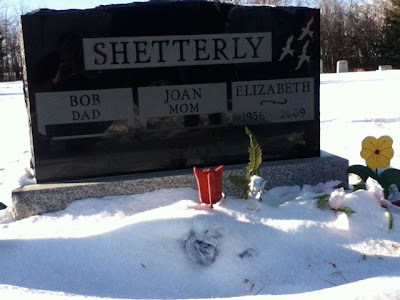 Mom mentioned to my niece once that she would like half of her ashes to be buried with her parents, so I accepted the job of making that happen.

Which may've been a bad idea, because at a basic level, I just don't understand graveyards. If you want to spend money on someone, spend it on them while they're alive.

I understand memorial services. They're not for the dead. They're for the grieving.

But I don't understand spending money to mount a piece of rock in a field that could be a park or farmland or a nature preserve. If you need more than your memories to remember someone, keep a photo or something that person had. In my living room, I have a small metal pitcher that was in Mom's bedroom when she died. It's more than enough for me to remember Mom.

I wanted to plant something over her ashes in Minnesota, then decide whether there should be a formal marker also, but my brother and my niece want a headstone, and I love them, so there'll be a marker in Minnesota as well as Manitoba. Something that should look nice near Mom's parents' graves will cost about $700, which is either too much or too little to spend on remembering someone you love, but that's the business of death for you.
at June 01, 2012 No comments: