how to play Monopoly, American-style

This description assumes five players, but it can be tweaked for more or fewer. (See below.)

When players run out of money, they accumulate debt. Whenever debtors pass Go, they divide their income among their creditors.

The game never ends. If you want to quit, put the cannon in your mouth and say "Boom!"

Note: The percentages are based on the current wealth and income quintiles of the USA. If you have more or fewer players, adjust the percentages accordingly. But don't even think about giving everyone the same amount when they start or when they pass Go—this game isn't called Pinko.

ETA: Passing "Go" in Monopoly is like Guaranteed Basic Income 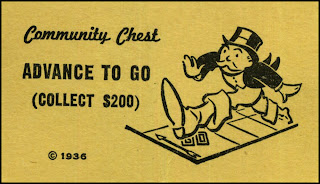 I hadn't realized that Monopoly includes a form of Basic Income until I read this, in The Pictorial Arts: The Color of Money:

My favorite part of the game was passing GO, just to always receive that stipend of $200. We should have that in real life. Everytime we pass GO, um, let's say every January 1, every man woman and child should receive a stipend, and with cost of living increases, that should be oh I dunno, $7500? Wouldn't that be a lovely way to begin each year? Or to spread it out, it could be on each of our birthdays. Wouldn't that make older people appreciate their birthdays more?