on blackface, or the cultural imperialism of anti-racism

Here's almost everything I've written about blackface. The tl;dr: Social justice warriors don't believe in context. Blackface is about mockery. If someone's pretending to be someone of another race without making fun of people of that race, it ain't racist. It might be stupid or ignorant, but as many have noted, ignorance is not racism; it's just ignorance.

I thought the Jackson Jive incident was an example of pure racism. Then the members of the "Jive" gave their occupations, and I realized that five upperclass Australians, four white and one Indian, had performed an astonishingly racist skit that was paid for by the show's upperclass producers.

Someday I'm sure I'll run into an example of something that's racist where class isn't a factor. But I haven't found it yet.

Harry Connick Jr. is my hero of the day.

2. anti-racism excess: KFC ad, or the intersection of anti-racism and US cultural imperialism

I wondered if this was like the Aussies in blackface performing in front of Harry Connick, Jr. Nope. Maybe it's just because I recognize Australia's national colors, but it seemed obvious to me this was about two different sports teams. Which it turns out it is. Australia's playing the West Indies team soon.

But American anti-racists are imposing US racism on other nations now. As any number of Australians have pointed out, Aussies didn't have a clue that in the US, black people liking fried chicken is racist.

Which, frankly, is one of the weirder bits of US racist code. I grew up in the South, and everybody down there liked fried chicken. We owned a Kentucky Fried Chicken restaurant for a while, and were one of the few places in the county that served whites and blacks. Mom and Dad were told by some black families that they came out of their way to support us. By eating fried chicken...

Some people think that any time you paint a person black or use voodoo images, it's racist, but art's more complex than that--you have to judge each piece on its own merits. Just as supernatural movies about exorcism don't automatically make people anti-Catholic, supernatural movies about voodoo don't automatically make people anti-voudoun. As for people painted black, there's an enormous difference between the racist caricature of blackface and this. Is anyone really going to watch this and believe that black people are scary voodoo creatures? I think not.

5. on blackface and actors playing other races

This is a classic image of blackface, a white person wearing makeup to mock black people: 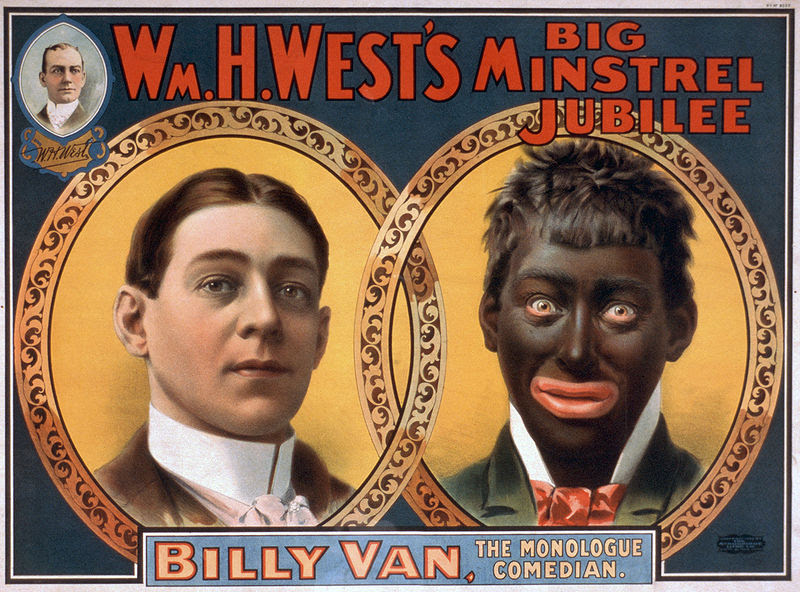 Note the exaggerated lips and the unnaturally dark skin—blackface was done with black shoe polish or a very dark skin dye to make a white person look like a black version of a whiteface clown.
Some people think any attempt to portray someone of another race is racist. They say this white model portraying a black woman is racist: 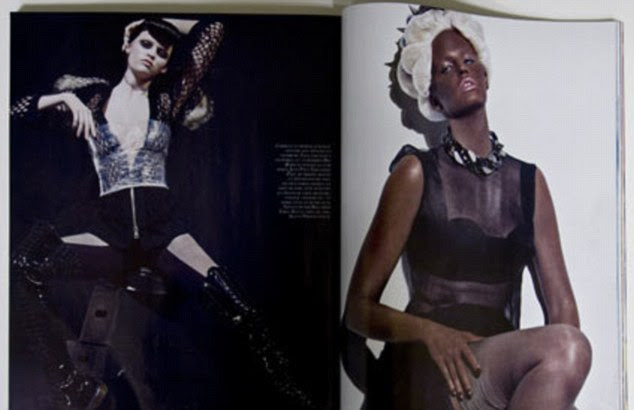 And Beyonce Knowles betrayed all black and Asian Women by modeling as a white woman:

Beyonce was also accused of doing blackface when she darkened her skin: 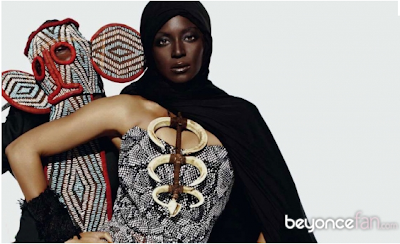 If you accept the logic that portraying someone of another race is always racist, John Howard Griffin's Black Like Me is a racist book; when segregation was legal in the US, he darkened his skin and hair to have a first-hand experience of being black: 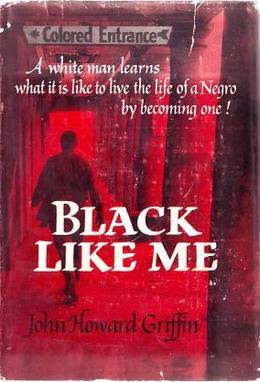 Whites who play Othello get accused of doing blackface:

But people rarely accuse Orson Welles of blackface because he plays the character with respect:

While Lawrence Olivier's makeup and eye-rolling crosses into parody:

The question of respect for the character is crucial. Harry Connick was caught up having to judge a bad parody of the Jacksons in Australia:

These people aren't parodying the individual Jacksons; they've made themselves up to look like golliwoggs, and the humor comes from the idea of, as Connick puts it, portraying black folks as buffoons.

That's the simple rule for deciding whether someone is indulging in blackface: If they're mocking a race by pretending to be of that race, they're being racist. If they're not, they should be prepared for identitarians to misunderstand. But ultimately, we're all human. If you want to look like your race or sex or age or class is different, that's your right as part of the human race.

Which applies to non-human races, too. Here's a cultural artifact from the 1960s:

I suspect antiracists are more obsessed with racial purity than racists are. Racists, at least, will happily eat fried chicken and not worry about whether they're appropriating a black thing.

Which doesn't really have anything to do with this post. For once, I'm grateful to Racialicious because one of their writers' accusation that Florence + The Machine had made a racist video taught me something about Balinese religion that I hadn't known.

What is shown in the video is not blackface, nor is it representative in Voodoo. The faith that is represented here is Balinesian (spelling?) and the ritual, which they actually brought in a shaman dancer of the faith for those scenes. The body paint is part of the ritual, it is a dark green body pain with red flashes on the face, to mirror the frogs of the region. To call it blackface is actually exceptionally offensive to the Balinese faith, and I hope the writer of this article apologizes. That is the equivalent of calling a Catholic Deacon Robe a Klan Robe. It is offensive and transferring the meaning of one onto something completely different and feels as if research was not done in the writing of this article. The immediate assumption of blackface and accusations of thus actually seem to be racially based against Miss Welch (an artist who has taken forefront involvement in many Aretha Franklin and Ella Fitzgerald Tribute concerts) caucasion roots.

Also the Dog Days video, the Gospel Choir is used to represent Florence's Gospel roots in terms of her music. Its like why the 60s mod women are there, because the 60s inspire her. Also she does not make herself "whiter" in the video, whe is dressed in Japanese Kabuki Garb complete with Kabuki Makeup. The reason everything blows up at the end is that it is the removal of inspiration until only Florence is left. It is a representation of her roots in music.

Also, maybe it is because I have research the Balinese Faith, but the ritual's meaning is similar to the song the choir is singing. I took the video to be ABOUT running from the unfamiliar and taking shelter in the familiar. I thought that it was ABOUT ignorance.

Other commenters dismiss that, because antiracists have a powerful streak of US imperialism which says other cultures don't matter. If something makes antiracists think of something that had racist connotations in the US, those connotations matter more than, well, the truth.

When antiracists waved away the Balinese origin of the imagery, Ohmansteve wrote:

I find the insinuation that the Balinese body paint used to become the frog in the ritual dance that the shaman in this video is showcasing is blackface, and that it is a representation of Voodoo, instead of the Balinesian faith, to be racist and to reek of poor research. Shame on this site for not doing research, and jumping to the conclusion that body paint in a white person's video must be blackface. Thank you for the bald faced racism here, go research the Balinese religion.

RACISM? WHERE?! Flo is a woman who has just gotten out of a relationship. She still loves this person so she holds on to his memory and all the negative energy that came with their relationship. It is making her self destructive, the asian man painted dark green with bright red lips tries to help her through a Balinese ritual dance called a sanghyang but she refuses because that's all she has at this point. So he uses the doll to weaken her and force her to﻿ see reason.

ETA 2: The existence of Balinese voodoo.

I've been pondering the Zwarte Piet controversy. The Dutch, being seafarers, were big in the African slave trade, and they didn't abolish slavery until 1863, well after Zwarte Piet became part of the culture. But I'd want more evidence that modern Holland is racist before concluding the Zwarte Piet is racist. As always, context matters.Mind you, I'm not saying Holland isn't racist. I just don't know enough about their attitudes toward interracial marriage, black folks in white collar jobs, and such to say. I do know there are anti-immigrant factions, but anti-immigrants aren't necessarily racists--in Arizona, there are Hispanic Republicans who want to limit immigration.

8. a conversation with a European about blackface