Part 1
Halloween is supposed to be transgressive, meaning it's supposed to be a time when a culture's norms are challenged. Which is why so many different groups fight to control it. In the social justice community, that's taken the form of criticizing sexy costumes.

Many of which, I grant, are ugly or stupid or both.

But the complaint of social justice warriors is that they're sexy. Given that when Halloween was first celebrated, the "costumes" were nudity and deshabille, that seriously misses the point.

Until the 1930s or so, Halloween costumes were only associated with the supernatural. My hasty googling doesn't come up with much in the way of early ghosts and demons, but here are some historical images of sexy witches from a blog that's very easy to google, Sexy Witch. (For the wage-slaves among you, yes, that site is generally NSFW, but this post will only have images that should be SFW, unless your boss is an extreme prude.)

Here's an 1895 illustration for a White Witch costume to wear to a Fancy Ball. Note that the bodice is shockingly low and the ankles are revealed in a very daring fashion:

Here are four witches from around 1890:

They may not seem sexy to you, but they know what they're evoking as witchy women in the woods. Here's a Pears Soap label from the same decade:

The sexy witch costume may have begun to thrive in the Roaring Twenties. Here's a tally card:

From the 1930s, a Halloween witch, actor Nancy Carroll: 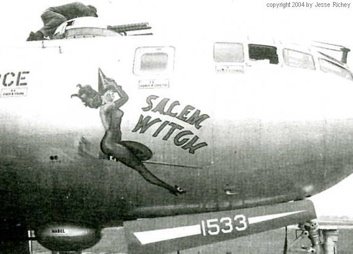 And one of my favorite sexy witches, Dusty Anderson:

The 1950s gave us water-skiing witches:

And possibly the greatest pin-up painting of all time, Gil Elvgren's "Riding High":

Halloween is a time to play. If your idea of playful includes sexy, go ahead and outrage the neo-puritans. They're always happiest when they have something to be unhappy about.
Happy Halloween!
PS. I just googled "sexy puritan" and came up with a couple more images that, on first glance, appear to be fairly old.
From Those Naughty Pilgrims:

And from Amuse Boosh! – Heart Of Darkness: The Thanksgiving Chronicles: 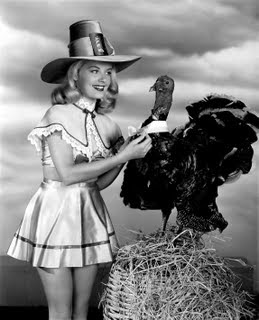 Part 2
After posting sexy halloween costumes and social justice neo-puritanism, I did a little more googling for Halloween costumes. Here's the range of visible skin for men and women that's available to anyone with a credit card:

So when someone complains about skin-revealing costumes, remember that they're not complaining about not having choices. They're complaining about the possibility someone else might show skin.
I chose the picture of the people in buckskin because they were literally the first couple who came up when I googled for sexy costumes. At the site, the writer notes they're racially insensitive, but I doubt anyone in the universe thinks any American Indian ever dressed anything like that. And if you assume "buckskin = American Indian", all you know about Indians came from Hollywood.
Catholics are the largest religious denomination in the US, but they're not excluded from the US's available sexy costumes:

Is your point that "it's always been this way" is an argument against objecting to something? Because I'd like to submit 'oppressing the lower classes, since practically forever' into the record in that case :)﻿

He's completely right that tradition alone is a terrible reason for doing something. I focused on tradition because I had seen people talking about sexy costumes who thought they were a new development.
My greater argument is simple: people should be free to wear what they like. It's a free speech issue, which the people who are offended recognize. They think certain kinds of clothing send a message that they want to repress.
In the case of sexy clothing, the message is "sex is fun".
Some people really hate that message.
In the G+ comment thread, Kirin Robinson said,

...there's value to a not-actually-arousing sexual aesthetic (no matter your orientation) in mainstream visual culture that is a different thing from intent-to-arouse straight-up pornography, but frustratingly the pulchriphobes can't seem to tell the difference.﻿

...credit for that particular word goes to the artist +Zak Smith and the "chainmail bikini wars" over here in the tabletop gaming world.﻿

Zak Smith's word is lovely. I suspect I'll have cause to use it again. But I really hope I don't.
•
comments on Part 1: sexy halloween costumes and social justice neo-puritanism

comments on Part 2: more on sexy halloween costumes and social justice neo-puritanism
Posted by Will Shetterly at 10:10 AM