the Shetterly cuts of Tombstone and Wyatt Earp

Tombstone is one of my favorite movies, despite its many flaws. As a Christmas present for two people who love it as much as I do, I'm doing a simple edit of the director's cut. For anyone who wants to do something similar, here's what I advise:

1. Cut the opening scenes, the newsreel, the cowboys in Mexico, and the Earps getting off the train in Tucson, so the movie starts with the camera panning up to Doc. (Time deleted: a little over ten minutes.)

2. In the scene where Wyatt meets Josie in the woods, cut just after the shot in which Wyatt says, "Yeah, I'm an oak, all right" to the scene that opens with Mattie drinking laudanum. I'm especially proud of this cut. It eliminates bits where Dana Delany really needed a director who would've helped her sound less like a conventional woman of the 1990s and more like an unconventional woman of the 1880s, and it heightens the Wyatt-Josie-Mattie storyline. (Time deleted: four minutes, but for some of us, it feels like hours.)

3. Cut from Doc's death to the credits. Amusingly to me, this cut deletes George P. Cosmatos's director's credit, which, given the troubled history of the movie, may be appropriate. (Time deleted: not quite three minutes of saccharine romance and boring voiceover about what happened to some of the characters after the story was over. Really, when you get to the end of a story, stop.)

I used the director's cut because it has a couple of useful scenes that were cut from the theatrical version, including Doc's farewell to Kate. So the Shetterly cut gives you more plot, more Doc, less Josie, and less dawdling. It loses one action scene, the opening scene that's gratuitous, unoriginal, not true to history, and arguably racist in that it makes the Mexican police look incompetent. Since the Shetterly cut gets rid of more time without action, I'd like to think the most avid action fan would be comfortable with the trade.
Length of director's cut: 134 minutes
Length of theatrical cut: 130 minutes

Kevin Costner's Wyatt Earp is one of our favorite examples of trying to put too much into a story. When we watched it in the theater, a fascinating thing happened: after each sequence, I thought, "That wasn't bad, but it should've been cut." The Shetterly cut starts with Wyatt meeting Doc in Fort Griffin and ends when the last of the Tombstone cowboys are killed. Running time: One hour and 41 minutes.

Start at 1:18:12, or maybe a few seconds off from there. Costner will be riding through the Texas plain, and there'll be the kind of music the credits could roll under, and then he'll enter Fort Griffin, Texas. In the next minute or so, he'll talk to a bartender and meet Doc Holiday, and their dialogue will tell you all you need to know about what happened before.

Properly, you should stop at 2:59:??, when it segues to the older Earp in Alaska. Structurally, the ending isn't great that way, but the Alaska sequence doesn't work for me either. No one's really managed to do a great ending to the Tombstone story.

Why you should watch it: Dennis Quaid as Doc Holiday is fantastic. The bits with the Earp family are generally quite good. Joanna Going is an infinitely better Josie Marcus than Tombstone's Dana Delany. Catherine O'Hara as Allie Earp and Isabella Rossellini as Big Nose Kate are great, and if I'd been in charge, I would've given them more screen time.

What's interesting but wrong about it: It's all from the point of view of Wyatt, so you never get a decent sense of who the bad guys are and what they want. (If I'd been in charge, the cowboy gang would get another scene or two.)

Even skipping the parts that don't contribute to the story, Wyatt Earp just isn't as much fun as Tombstone. Costner deserves the Razzie that he got for his performance (Wyatt Earp needs to be played cold--James Garner probably came closest to getting his tone right), but if you like Tombstone stories, the section I recommend is worth seeing. If you feel like it when you hit 2:59:??, watch the end and then the early parts as if they're DVD extras.

weirdnesses of the day

Other weirdness is that inside the yard—meaning someone threw it over the fence—was a black power hair pick, the cheap plastic sort that has a fist on the end of the handle.

People connect dots, but not always correctly. These things might not be related.

Why a vandal or a thief would throw away a hair pick is an idea for a story that I doubt I could write.

It'll be a handyman day. I already made the trip to Home Depot for plywood.
at October 09, 2013 No comments:

After I posted unpacking outrage: why elitists hate "Accidental Racist" by Brad Paisley and LL Cool J, I got email from the Times editor asking if I'd like to do about 300 words on the subject for them. In some ways, I prefer my original post, but I did my best to make myself clear for Times readers in the space I had. Alas, making yourself clear in 300 words on a subject like race may be impossible. You can do it in fewer words; I still stand by one of the things I said that gets quoted sometimes: “There are no scientific tests for race . . . blood is blood, and bone is bone. Race is a con game. Don't play.”

But given 300 words, I'm only writing an introduction to a much longer discussion.

Which may be the point.

The comments there are interesting. Emma said I shouldn't respond to any, and she's right, but I responded to a few anyway.
at April 11, 2013 No comments:

a pen engraver in Iran

Katayoun, an Iranian friend, sent us this lovely pen: 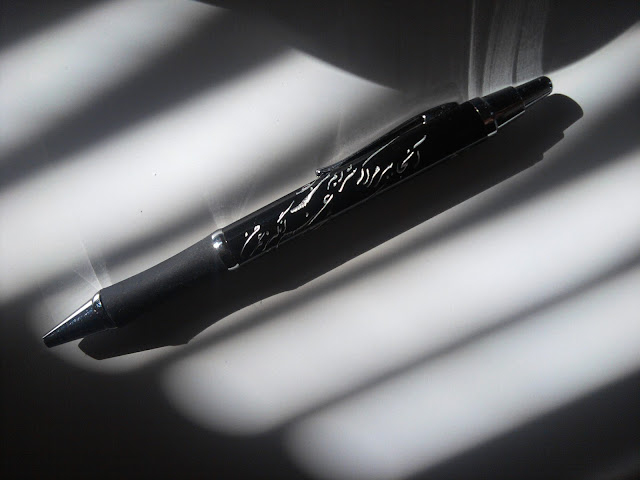 The engraving was done by an artist on the street: 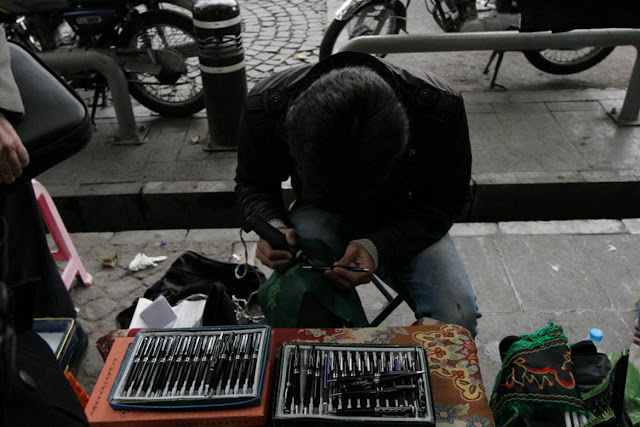 She included a translation:

O eagle of love
Rise up from your misty, distant peaks
Wing your way to the grieving plains of my life
Take me to where the wine no longer carries me

It's from a poem, Come, Fill the Cup, by Fereydoon Moshiri.

Katayoun said of the artist, "he was very cool, knew a whole lot of poems by heart, had a huge notebook for people to choose from but could recite most of them by heart!"