Chimera: Now available as an ebook! 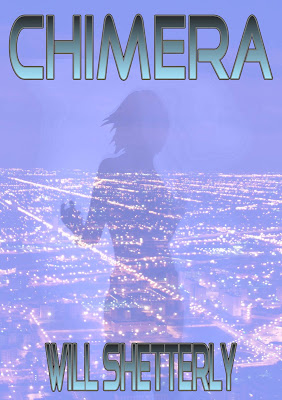 
In the twenty-first century, gene splicing can produce a human-shaped being with a killer whale's strength and ferocity and artificial intelligence (AI) that can be selfish as a four-year-old. Part-animal chimeras and AIs aren't fully equal to humans, however; chimeras, for instance, can go murderously insane without warning. Should such creations have the rights of humans? PI Chase Maxwell is reasonably enlightened but hadn't thought much about such issues. Then a lithe, beautiful jaguar-woman interrupts his game of five-card stud. Zoe Domingo is wanted for the apparent murder of her patron and friend, an elderly roboticist. She says she didn't do it and blames a rogue copbot. Suddenly, the police, a chimera-rights activist, a powerful CEO, and some garden-variety gangsters are all interested in her. Shetterly revs up the sf concept of animal-human hybrids with his Spenserish PI hero, who both shoots straight and makes a great sandwich. Vivid characters and a tense, sexy story line enliven the excellent cyberthriller's themes of choice, freedom, and responsibility. Roberta Johnson

Smashwords — Chimera — A book by Will Shetterly

Coming from other fine ebooksellers soon!
Posted by Will Shetterly at 7:00 AM

Email ThisBlogThis!Share to TwitterShare to FacebookShare to Pinterest
Labels: my fiction