On name-calling and ad hominem, the bottom-feeders of Graham's Hierarchy of Disagreement

Yesterday, I was listening to the radio, and a psychiatrist was talking about people who hear an insult and cannot separate themselves from it. He was restating an old idea: the mature response to an insult is not to feel hurt, but to see that the person making insults is suffering.

Insults have fascinated me since I was called a nigger-lover as a boy: insults tell you little about their target, but they tell you everything about what the insulter fears. Since I had been taught that loving everyone is good, that particular insult baffled me. And yet, at the same time, it hurt because humans are social creatures. We don't want to be excluded or hated, not even by haters.

For many groups, the easiest way to be included is to insult the group's idea of the other, the person who may be mocked for being outside the group. Which may be why the internet has so many examples of people who enjoy life at the bottom of Graham's Hierarchy of Disagreement: 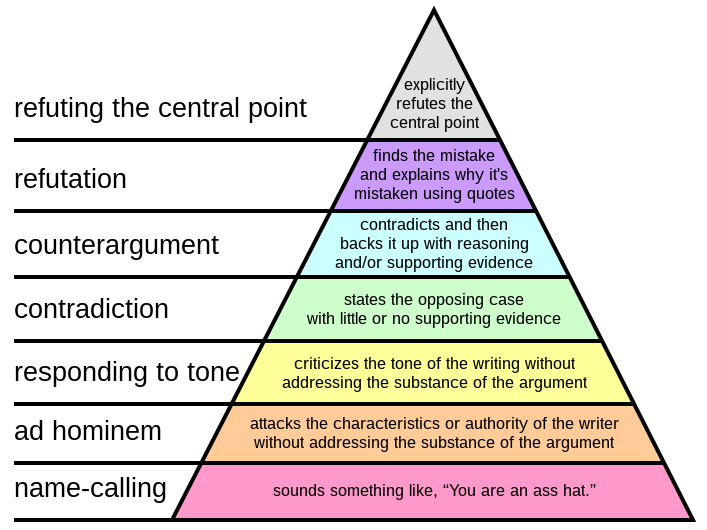 Graham says optimistically, "A DH6 response might be unconvincing, but a DH2 or lower response is always unconvincing."

But the truth is for many people, name-calling and ad hominem are extremely convincing. A study of the "nasty effect" involving over a thousand participants found "Uncivil comments not only polarized readers, but they often changed a participant’s interpretation of the news story itself."

Still, what's convincing is not necessarily what's good. If you don't like getting insults, don't give them.

Related: Respect everyone
Posted by Will Shetterly at 10:24 AM