John Scalzi vs the ACLU and me on free speech

I'll number Scalzi's Ten Things About Petitions and Freedom of Speech without quoting them, because I'm lazy.

1. Like all people who support limiting speech, Scalzi takes a conservative legalistic approach; the ACLU does not. From Free Speech | American Civil Liberties Union: "The ACLU’s Project on Speech, Privacy, and Technology (SPT) is dedicated to protecting and expanding the First Amendment freedoms of expression, association, and inquiry; expanding the right to privacy and increasing the control that individuals have over their personal information; and ensuring that civil liberties are enhanced rather than compromised by new advances in science and technology."

2. Ditto on censorship. From What Is Censorship? | American Civil Liberties Union: "Censorship, the suppression of words, images, or ideas that are "offensive," happens whenever some people succeed in imposing their personal political or moral values on others. Censorship can be carried out by the government as well as private pressure groups. Censorship by the government is unconstitutional. In contrast, when private individuals or groups organize boycotts against stores that sell magazines of which they disapprove, their actions are protected by the First Amendment, although they can become dangerous in the extreme. Private pressure groups, not the government, promulgated and enforced the infamous Hollywood blacklists during the McCarthy period."

4. The ACLU knows very well that supporting free speech can have repercussions: From ACLU History: Taking a Stand for Free Speech in Skokie | American Civil Liberties Union: "In 1978, the ACLU took a controversial stand for free speech by defending a neo-Nazi group that wanted to march through the Chicago suburb of Skokie , where many Holocaust survivors lived. The notoriety of the case caused some ACLU members to resign, but to many others the case has come to represent the ACLU's unwavering commitment to principle."

5. Signing a petition to protest a development that you have reason to fear is nothing anyone should be ashamed of. Scalzi's Task Force had not been disbanded when the petition was circulated. Better to speak up too soon than too late, as Niemoller knew too well.

6. The ACLU undoubtedly wishes every petition was beautifully written, because good lawyers are like that, but badly written petitions in support of free speech are still support for free speech.

8. The ACLU would probably note that language is more flexible than many people think. Regarding "political correctness", the term has been used by the left and the right. Doris Lessing wrote, "Does political correctness have a good side? Yes, it does, for it makes us re-examine attitudes, and that is always useful. The trouble is that, with all popular movements, the lunatic fringe so quickly ceases to be a fringe; the tail begins to wag the dog. For every woman or man who is quietly and sensibly using the idea to examine our assumptions, there are 20 rabble-rousers whose real motive is desire for power over others, no less rabble-rousers because they see themselves as anti-racists or feminists or whatever."

From Hate Speech on Campus | American Civil Liberties Union: "How much we value the right of free speech is put to its severest test when the speaker is someone we disagree with most. Speech that deeply offends our morality or is hostile to our way of life warrants the same constitutional protection as other speech because the right of free speech is indivisible: When one of us is denied this right, all of us are denied. Since its founding in 1920, the ACLU has fought for the free expression of all ideas, popular or unpopular. That's the constitutional mandate."

9. The ACLU couldn't care less whether someone refers to a black friend, but the ACLU would note that citing an anonymous source has a fine precedent in journalism and the law. To assume that an anonymous black person couldn't subscribe to a particular belief assumes all black people are alike, and most people would like to protect their friends from people who think like that about race.

10. Either this is more padding to make 10 points, or it's back-patting. People of good will don't make posts like Scalzi's, but people who preach to the choir do.

ETA: A reminder that censorship which is legal, like the censorship that the Hollywood 10 faced, can still be vicious: 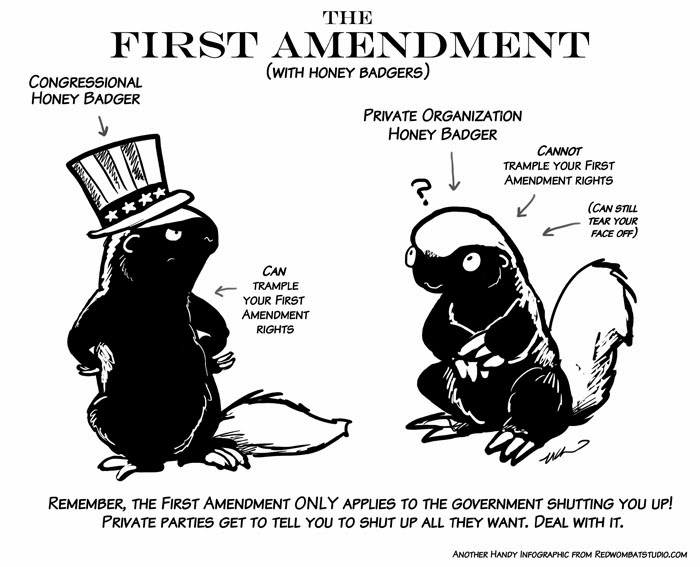 Posted by Will Shetterly at 1:13 PM