I saw this rather hectoring article: The Only Thing Americans Worry About Less than Climate Change? Race Relations - The Wire. The writer, a white guy named Philip Bump, thinks the low ranking of race relations is a bad thing. Here are the priorities Gallup found:

I went looking for the original study and failed to find a break-out for white and black folks, so I'm guessing the results weren't very different. Pollsters usually mention wide divergences in subgroups. But I googled a bit and found Race Relations | Gallup Historical Trends, which has this: 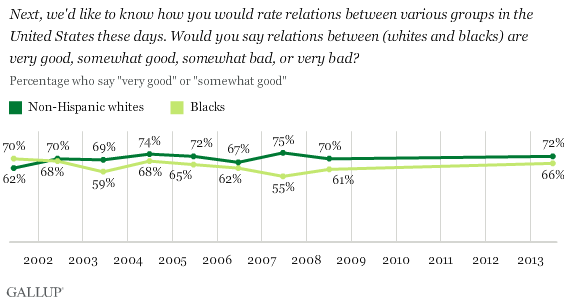 So the answer is most white and black folks think race relations are good overall. I found a few more things I had suspected:

U.S. Blacks, Hispanics Have No Preferences on Group Labels—Black or African-American is just fine, as is Latino or Hispanic, and "people of color" is such a non-issue that it doesn't even appear on the list.

Fewer Blacks in U.S. See Bias in Jobs, Income, and Housing: "Older blacks are more likely to say differences are due to discrimination" A more precise statement would've been "older blacks and younger identitarians who attended expensive private schools" but the latter group only matters in the online warriorverse.

Standard disclaimer: No, this does not mean there's no more racism. It only means racial issues have improved greatly in my lifetime, and many of the talking points of social justice warriors aren't relevant offline.

ETA: An interesting point about the first graph. It does have a breakdown by Republicans and Democrats. This did surprise me: race relations are slightly more important to Republicans than to Democrats.
Posted by Will Shetterly at 10:18 AM