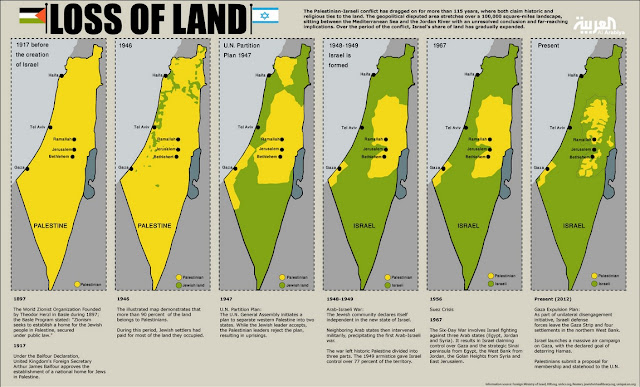 “Menahem Begin, the Leader of the Irgun, tells how ‘in Jerusalem, as elsewhere, we were the first to pass from the defensive to the offensive...Arabs began to flee in terror...Hagana was carrying out successful attacks on other fronts, while all the Jewish forces proceeded to advance through Haifa like a knife through butter’...The Israelis now allege that the Palestine war began with the entry of the Arab armies into Palestine after 15 May 1948. But that was the second phase of the war; they overlook the massacres, expulsions and dispossessions which took place prior to that date and which necessitated Arab states’ intervention.” Sami Hadawi, Bitter Harvest


“The former Commander of the Air Force, General Ezer Weitzman, regarded as a hawk, stated that there was ‘no threat of destruction’ but that the attack on Egypt, Jordan and Syria was nevertheless justified so that Israel could ‘exist according the scale, spirit, and quality she now embodies.’ ... Menahem Begin had the following remarks to make: ‘In June 1967, we again had a choice. The Egyptian Army concentrations in the Sinai approaches do not prove that Nasser was really about to attack us. We must be honest with ourselves. We decided to attack him.’“ Noam Chomsky, The Fateful Triangle

“I do not think Nasser wanted war. The two divisions he sent to The Sinai would not have been sufficient to launch an offensive war. He knew it and we knew it.” Yitzhak Rabin, Israel’s Chief of Staff in 1967, in Le Monde, 2/28/68


Who is responsible for the 1929 Palestine riots?


On August 17, a Jew named Avrahim Mizrachi was stabbed in a fight with neighbors. He died a few days later. Over the next four days, the Jerusalem police reported 12 attacks by Jews on Arabs and seven attacks by Arabs on Jews. On the morning of the 23rd, several Arabs were killed in Jerusalem's Mea She'arim neighborhood. Soon after that, violence erupted throughout Palestine with Jews killing Arabs and Arabs killing Jews. During the Hebron Massacre, a mob killed 63 Jews while over 400 were saved by local Arab families. The riots ended with almost equal numbers of people killed on each side, 133 Jews and 116 Muslims.

For more: 1929 Palestine riots and the Hebron Massacre


“In 1948, at the moment that Israel declared itself a state, it legally owned a little more than 6 percent of the land of Palestine...After 1940, when the mandatory authority restricted Jewish land ownership to specific zones inside Palestine, there continued to be illegal buying (and selling) within the 65 percent of the total area restricted to Arabs.

Thus when the partition plan was announced in 1947 it included land held illegally by Jews, which was incorporated as a fait accompli inside the borders of the Jewish state. And after Israel announced its statehood, an impressive series of laws legally assimilated huge tracts of Arab land (whose proprietors had become refugees, and were pronounced ‘absentee landlords’ in order to expropriate their lands and prevent their return under any circumstances).” Edward Said, The Question of Palestine


Was the partition plan fair?


“Arab rejection was...based on the fact that, while the population of the Jewish state was to be [only half] Jewish with the Jews owning less than 10% of the Jewish state land area, the Jews were to be established as the ruling body — a settlement which no self-respecting people would accept without protest, to say the least...The action of the United Nations conflicted with the basic principles for which the world organization was established, namely, to uphold the right of all peoples to self-determination. By denying the Palestine Arabs, who formed the two-thirds majority of the country, the right to decide for themselves, the United Nations had violated its own charter.” Sami Hadawi, Bitter Harvest


When did Zionists begin seizing more land than the UN plan allowed?


“Before the end of the mandate and, therefore before any possible intervention by Arab states, the Jews, taking advantage of their superior military preparation and organization, had occupied...most of the Arab cities in Palestine before May 15, 1948. Tiberias was occupied on April 19, 1948, Haifa on April 22, Jaffa on April 28, the Arab quarters in the New City of Jerusalem on April 30, Beisan on May 8, Safad on May 10 and Acre on May 14, 1948...In contrast, the Palestine Arabs did not seize any of the territories reserved for the Jewish state under the partition resolution.” Henry Cattan, Palestine, The Arabs and Israel


How many massacres were committed by Zionists in 1948?


“For the entire day of April 9, 1948, Irgun and LEHI soldiers carried out the slaughter in a cold and premeditated fashion...The attackers ‘lined men, women and children up against the walls and shot them,’...The ruthlessness of the attack on Deir Yassin shocked Jewish and world opinion alike, drove fear and panic into the Arab population, and led to the flight of unarmed civilians from their homes all over the country.” Simha Flapan, The Birth of Israel

“...according to the former director of the Israeli army archives, ‘in almost every village occupied by us during the War of Independence, acts were committed which are defined as war crimes, such as murders, massacres, and rapes’...Uri Milstein, the authoritative Israeli military historian of the 1948 war, goes one step further, maintaining that ‘every skirmish ended in a massacre of Arabs.’” Norman Finkelstein, Image and Reality of the Israel-Palestine Conflict

Is Israel an apartheid state?

"I have witnessed the systemic humiliation of Palestinian men, women and children by members of the Israeli security forces. Their humiliation is familiar to all black South Africans who were corralled and harassed and insulted and assaulted by the security forces of the apartheid government." —Bishop Desmond Tutu

The Origin of the Palestine-Israel Conflict

Iran Didn't Actually Threaten to Wipe Israel Off the Map


Israeli spokesmen have their work cut out explaining how they have killed more than 1,000 Palestinians in Gaza, most of them civilians, compared with just three civilians killed in Israel by Hamas rocket and mortar fire. But on television and radio and in newspapers, Israeli government spokesmen such as Mark Regev appear slicker and less aggressive than their predecessors, who were often visibly indifferent to how many Palestinians were killed.

There is a reason for this enhancement of the PR skills of Israeli spokesmen. Going by what they say, the playbook they are using is a professional, well-researched and confidential study on how to influence the media and public opinion in America and Europe. Written by the expert Republican pollster and political strategist Dr Frank Luntz, the study was commissioned five years ago by a group called The Israel Project, with offices in the US and Israel, for use by those "who are on the front lines of fighting the media war for Israel".

The Department of Corrections:'Ben-Hur', the LA Times & A Place Called Palestine


Despite the claim that "the Romans didn't rename Judea as 'Palestina' until a hundred years after the death of Jesus," contemporaries of Jesus also routinely referred to Palestine as, well, Palestine. For instance, in the first decade of the 1st Century CE, the Roman poet Ovid mentioned Palestine in both his famed mythological poem Metamorphoses and his erotic elegy The Art of Love. He also wrote of "the waters of Palestine" in his calendrical poem Fasti. Around the same time, another Latin poet Tibullus wrote of "the crowded cities of Palestine" in a section called "Messalla’s Triumph" in his poem Delia.