The first sentence at the HeForShe site is false

The first sentence at HeForShe: "The movement for gender equality was originally conceived as a struggle led by women for women."

Someone's lying or ignorant. The word "feminism" was coined by a man, the utopian socialist Charles Fourier. First and second wave feminism could have better been called egalitarian or equalist or, as Dora Montefiore argued in 1901, humanist movements. Feminism was simply about equality, and that has always been an issue which crosses lines of social identity. Feminism would never have had its first great victory if men had not voted to give women the vote.

Feminism only became a movement "by women for women" with the birth of identitarian feminism in the late '60s, when some feminists changed their focus from sex and society to gender and society.

PS. For anyone confused by the difference between sex and gender, I like WHO's explanation:

ETA: Though I wish Emma Watson had talked about egalitarianism instead of feminism, I liked her speech for the same reasons MRAs and SJWs are criticizing it—she was basically arguing for egalitarianism under the name of feminism, so gender partisans hated it. Here's an example from a professional SJW (note her bio's link to how to pay her to educate you): Why I’m Not Really Here For Emma Watson’s Feminism Speech At the U.N.

ETA 2: The site includes a nice quote from the speech: 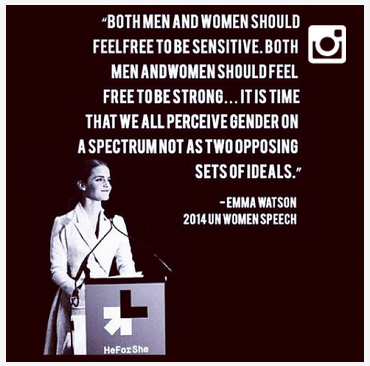 Email ThisBlogThis!Share to TwitterShare to FacebookShare to Pinterest
Labels: feminism