The best $200 I ever spent? or Fat tire bikes are honey badgers

The Men's 26 Inch Mongoose Dozer Bike is $199.99 at Toys R Us right now. I called them up yesterday, said I wanted it, told them to assemble one, took the bus out there (an hour trip), and they had assembled the wrong one. And because it's the holiday season, they couldn't spare anyone to make up another right away. So I took the bus back.

But I wasn't particularly upset, because I like reading on buses.

This morning I took the bus out again. And they'd assembled the wrong one again. But they were extremely apologetic and put someone right to assembling it, and about twenty minutes later, I began my bicycle ride home.

A nine mile trip. On a 57.4 pound bike. With one gear. In twenty degree Fahrenheit weather, which is what Minnesotans and Canadians call a nice winter day if the sun is shining.

But it was snowing.

And I loved it.

The Mongoose Dozer is shockingly cheap for a fat tire bike. That's because it's a lot heavier than deluxe bikes. There's a version with seven speeds and disc brakes that's around $250 (free shipping at Target), and we'll probably get that for Emma, but I kind of like "one bike, one gear".

Here's the thing: Fat bikes are honey badgers. I rode on the sidewalk wherever there weren't people walking, which was most of the way because of the 20 degrees and snowing. I rode over ice chunks as big as bricks and only had to walk my bike through one stretch where the plows had been throwing snow onto the sidewalk and no one had cleared it since last winter. I had to stand on my pedals to go up hills (something, Emma tells me, rich bikers say only "mashers" do—yes, the class war is everywhere), but I like doing that. Once, the back tire spun on ice. On a regular bike that would be terrifying. On a fat tire bike, I just wondered if it was going to be terrifying, and it wasn't: Honey (Emma named it after I told her fat bikes are honey badgers) and I just kept rolling on.

A heavy single-speed bike is slow. If I was getting one to commute, I'd definitely get the Dolomite. For doing things around the neighborhood, a single-speed will be fine.

These things should be given to poor people. Riding one isn't just faster than walking. It feels safer, because you don't have to worry about slipping. (Yes, you have to worry about braking, just like in a car, but it's like driving a car: notice what's ahead of you, and you'll know whether you need to slow down for an icy stretch and adjust your speed accordingly.)

I felt something like guilt twice, once when I saw a mother with two kids wrestling a cheap baby stroller through a stretch of sidewalk that hadn't been cleared in much too long, and again a little later, when I saw another cheap stroller abandoned on a street corner where someone had probably decided it was easier to just carry a kid or walk slowly beside one. For practical reasons, sidewalks should be kept clear by the local government.

I felt something like class war pride when I passed another fat tire biker whose bicycling clothes probably cost more than my bike. This one's a little tricker to explain, but I think it works like this: if I spend a fifth to a tenth as much for something that's half as good but still good enough, my use of the money is more than twice as effective.

Which isn't to knock Surlys. If I could afford one, I'd very happily get one. But for my budget and needs, Honey's my love. 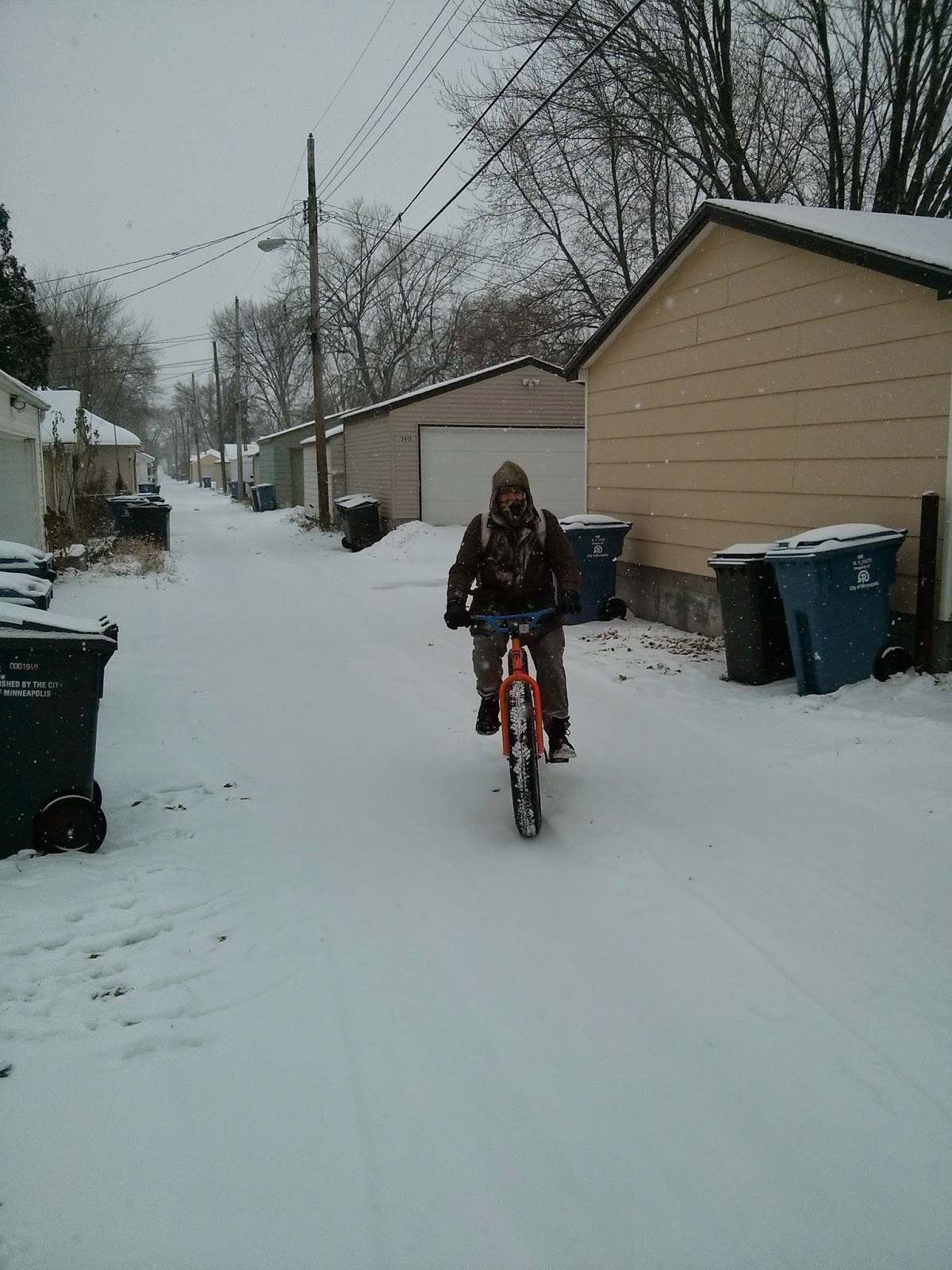 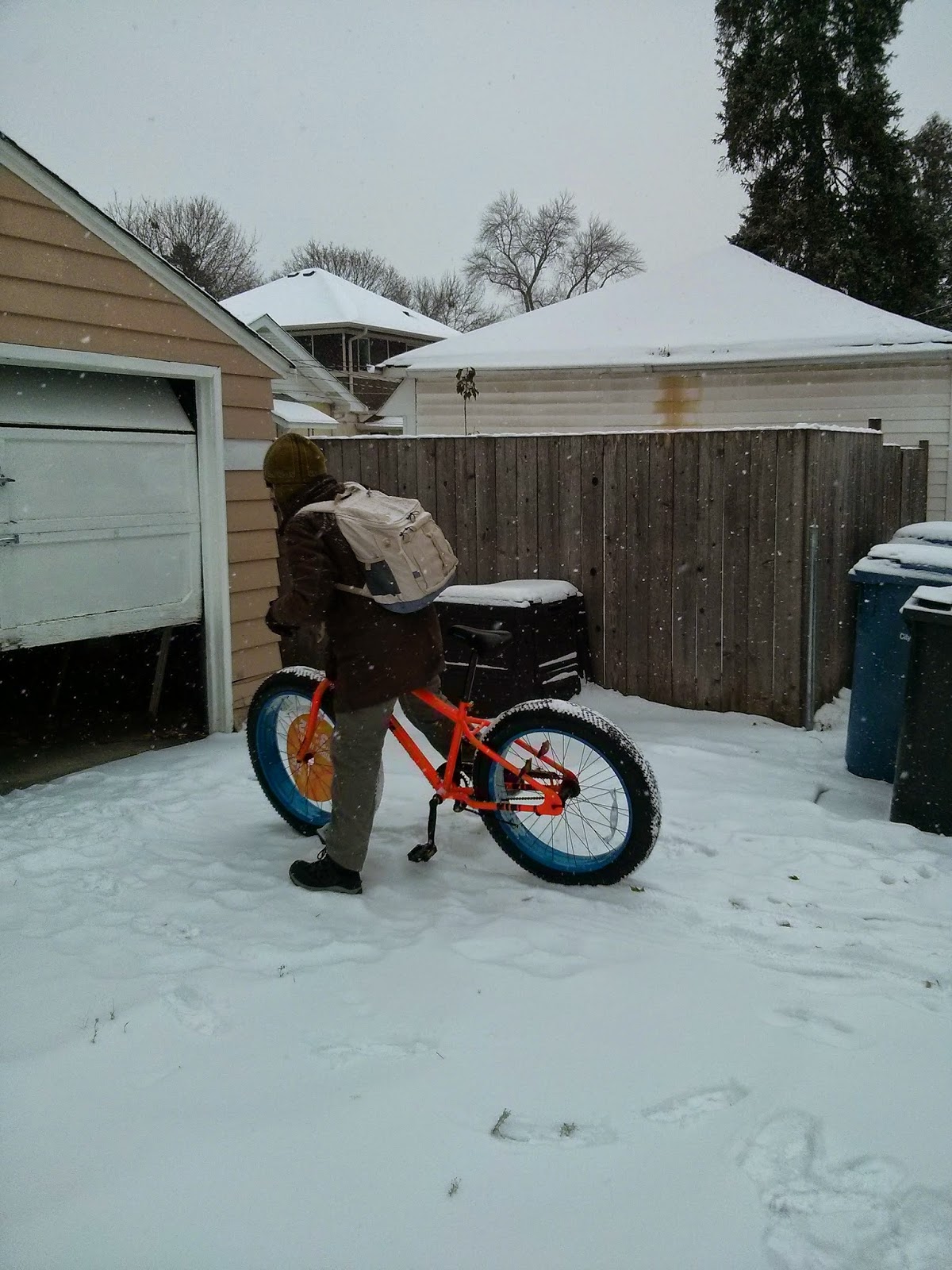 Maybe I'll paint her black in the spring, but the bright orange is nice on a gray day.