On Bride & Prejudice and what's essential to adapting Pride And Prejudice 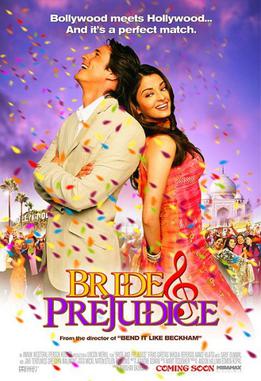 Bride & Prejudice is a fun, shallow updating of Pride and Prejudice, a musical comedy about a family in India whose daughters are looking for husbands, and one candidate is a rich American.

The writers (Gurinder Chadha, who also directs, and her husband Paul Mayeda Berges) make a common adapter's mistake: In the movie, Darcy first notices Lalita/Elizabeth because she's beautiful. The choice is understandable: musicals tell stories in broad strokes and the actress, Aishwarya Rai Bachchan, has been called the most beautiful women in the world. But it's wrong. In the novel, Darcy says Elizabeth's looks don't appeal to him. He's attracted to her despite her class and her looks because she's intelligent and independent.

The movie also suffers from what I'll call the Darcy Problem, possibly reinventing the wheel: Darcy is a difficult, minor role that calls for a great actor. Gurinder Chadha, the writer-director, and her husband/co-writer, Paul Mayeda Berges, cast Martin Henderson, who is competent, but who does not simmer—and the fault isn't entirely his. He's playing opposite a beautiful woman who sings and dances, yet he never gets a musical number. At the beginning of the movie, Naveen Andrew's Balraj/Bingley gets a great number in which he's "lip-syncing to the gorgeous voice of Sonu Nigam", so I don't understand why Darcy didn't get an equivalent scene when he finally begins to let Lalita/Elizabeth know him. Darcy's a private person; he should've had two musical moments, one in which he's all alone like Gene Kelly in the sequence that gives Singing in the Rain its name, and one in which he and Lalita/Elizabeth share an Astaire-Rogers falling-in-love number.

And there's another writing choice I don't understand. The magnificent Indira Varma plays Balraj/Bingley's haughty sister, yet when there's a confusion about who Darcy is expected to marry, a new character is introduced, a woman who's only memorable for being blond because her part is so very minor. I really, really wanted more moments than I got with Varma. Ditto that for Naveen Andrews, who kicks off the movie as though he'll be the male lead, then gets almost nothing more to do.

Ah, well.  The best parts are the music, the acting ranges from competent to great, and if you like Bollywood or Jane Austen, see it. Will-Bob gives it four stars out of five.

PS. The bit I quoted is from an article in which Proma Khosla analyzes her mixed feelings about the movie. She briefly mentions "cultural appropriation", but the appropriated culture in this case is the Regency—the director and co-writer is Indian, and while it's true her husband is a white American, he could as easily be accused of appropriating from the British since Darcy's part of the story is mostly set in Hollywood. That quibble aside, her article's recommended if the movie interests you.

PS 2. There's one moment in the movie that's fun, but Emma and I were a bit baffled because we didn't know the cultural reference. She found the explanation in Ash Kotak's India's transgender law is no help to its lesbian, gay and bisexual communities:


In Hinduism, the Hijra community (eunuchs) – neither born male nor female, but self-identified as female – are historically believed to have the power to grant wishes and cast spells, and are often present at weddings and births. A transgender presence within Hindu psyche stems back to the essential Hindu epic text, the Mahabharata, where the male Shikhandi (but born the female Shikhandini) was vital in securing the Pandavas's necessary victory over the Kaurava in the great war of Kurukshetra.

Posted by Will Shetterly at 8:46 AM

Email ThisBlogThis!Share to TwitterShare to FacebookShare to Pinterest
Labels: reviews