No need to offer condolences. Dad lived life on his own terms and came very close to dying under them. While I have some regrets, I'm generally content.

He had wanted to die on his farm and had a bottle of pills on hand that he intended to take if he ever thought he could no longer live unassisted, but a neighbor found him after a heart attack. He spent his last weeks at the clinic in Tofield, where Mom died. He always hated hospitals and nursing homes, but if he couldn't die at home, that was probably the next best place. He died last night between being checked on by the nurses.

My niece was surprised that he went so quickly after being admitted. Emma's mom went quickly too when she knew she could not go home again. They were both strong-willed people, and if I filled out the death certificates for them, under "cause", I would write, "cantankerousness."

My dad and I always had a difficult relationship. I respected him enormously, and loved him too, but I don't think I'll cry about his death. I'm a little sorry a great psychiatrist never got a chance to study him, because I suspect he was either the best sort of sociopath or unusually autistic. He always tried to do right by others, and so far as I know, he never lied. He could be extremely charming, but he had no interest in conforming to anyone's expectations, and he always lived very simply, wearing old clothes and eating cheap food. He had an extreme sense of duty and a great discomfort around emotion—he didn't like to be hugged and I don't remember him telling anyone that he loved them. He had no use for pretensions of any sort. He was an atheist for as long as I knew—my first regret now is that I never asked him when he became one—and I am sure he died one. I could tell you things I hated him for, but in the larger scheme of things, they weren't important. He was a flawed man like any man, but he was ultimately a good man, and maybe a great man. If you want a slightly—and only slightly—romanticized version of him, read Dogland.

Here are my main blog posts about him:

In the 1960s, he ran a tourist trap in Florida: about Dog Land, the place, and Dogland, the novel

And he was involved in the civil rights struggle: Bob Shetterly, the only liberal in Levy County

He and my mom and my sister moved to northern Ontario, where he crashed two planes, but only one was written up in the National Enquirer: Crashing a plane.

He is probably the oldest solo circumnavigator.

In 2004, he wrote a letter to my very conservative brother about American politics.

My life would've been easier with an easier man for a father, but all things considered, I was incredibly lucky that he was my dad.

ETA: My niece just informed me, "Edmonton accepted his body for science. They should be picking him up today or tomorrow." No memorial ceremonies are planned, but I'll probably toast him this evening, and the next time I'm near a large body of water, I'll toss in a rock or sail a paper boat in his memory.
at September 21, 2015 No comments:

On Toby, the best cat in the universe, and Barnabas, the worst

No, this is not about The Worst Cat (which you should click if you don't know the site). This is about Toby, who was the best cat in the universe, and a little bit about Barnabas, who is still the worst cat because Toby set the bar so high.

I have been crying a lot in the last 24 hours, and I am a man who almost never cries. This is the reason why:

(© Susan Levy-Haskell)
I suspect Toby was always the best cat in the universe, even when he was a kitten whose owners called him Spider because he climbed everything. He wasn't a Spider when they gave him to us because he was a young adult cat then who had been declawed, but I'm sure he was already the best cat in the universe. Even without claws, he ruled a couple of large dogs and leaped onto tall surfaces to mock them when they chased him. We spent the night in his owners' guest room, and he came in to sleep with us, and soon after that, they had to move to a smaller place and asked if we would like to have him.
Of course we would like to have him.
We drove 500 miles to pick him up. On the way back, we were very aware of his only major flaw, extreme car sickness. But when we got back to Bisbee, we discovered that his car sickness left almost as soon as the car stopped, because he immediately surveyed his new domain and found it satisfactory.
I'm not sure why we named him Toby. We hadn't been people who gave human names to cats, but he just seemed like a Toby. He had all his virtues then. He liked people and always came to greet strangers. He had dignity: he liked to be petted and to sit with or on people, but he had a Minnesotan reserve too—he rarely demanded affection, and he usually didn't like to be held for very long, though he would happily sit in your lap. I don't remember him swatting or biting anyone, except for vets, who deserved it on principle. He was almost always near Emma or me. He had sleeping places that were nearby—the chair by my desk, the window seat by Emma's—so he could open an eye to check on us and go quickly back to sleep. When one of us was in the kitchen and the other in the living room, he would lie near the doorway so he could investigate if one of us did something interesting.
I think I miss him so much because he was always near.
He rarely spoke, and when he did, he tended to speak politely. He knew that to get respect you should give respect, and that people who respect themselves treat everyone with respect. He also knew that dignity is not an absolute goal, and sometimes you just have to chase something. He was in all ways such a gentleman that the only other name I could imagine for him now would be Mr. Steed.
He loved to sleep under the covers. I've gotten in the habit of napping, and he usually came to curl against me. Today's nap was very hard without him.
He liked to hold hands by hooking his paw with your finger.
Interruption: A friend just rang the door and fled, leaving a tupperware container of Asian comfort food on the step, and I may've cried harder than I have yet, because Toby was the kind of cat whose passing deserves all the things a human passing deserves. When we knew he was going, we joked about giving him a Viking funeral, and it wasn't entirely a joke. A wake isn't quite appropriate—yesterday, when Emma wanted to toast him, I thought she would want whiskey, but she chose a glass of milk. We buried him in the backyard in his cat bed, wrapped in a blanket with his favorite catnip mouse between his paws.
Sunday, September 13
Now, a perfect cat can't be perfect, so here are Toby's annoying traits:
1. He loved to dash outside any chance he could get. He never went far—he loved to run down the back stairs and lie in the sun on the warm cement, or go onto the nearest bit of lawn to sniff and chew the grass. I usually said something like, "Oh darn, the cat got out" and sat on the steps for a minute or two before bringing him back in.
2. He loved to shred paper with his teeth. This could be annoying in a writer's household. But it wasn't that annoying. I would give almost anything to be annoyed by him tearing up paper again.
A version of this occurred most mornings for over a decade: 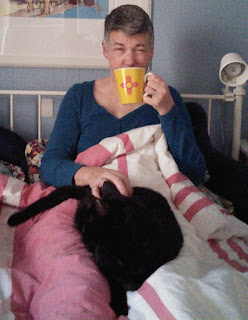 I'm glad Emma never had to choose to give up Toby, coffee, or me. A good spouse knows where he can't compete. My favorite morning duty was making her coffee and feeding the cats so she and Toby could have their time together.
The hole in our lives is enormous.
We are back to being a one-cat household. Barnabas, the worst cat in the univere, has begun to work at becoming the best; here he's in the chair by my desk where Toby usually sat. 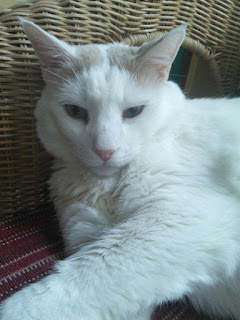 Barnabas is not very good at being a house cat. He came to live in the barn in Arizona, so for the longest time, his name was simply Barncat, but then Emma decided to coax him indoors, a process she or I may write about sometime, and calling him Housecat didn't seem to make sense. Oddly, even though his manners are atrocious, we have never asked him if he was born in a barn, perhaps because we suspect he had human owners briefly, then spent ages being semi-feral in the desert, where he would talk loudly to himself and make self-respecting coyotes flee in disgust. Though he is still the worst cat in the universe, when I saw him sleeping curled against Emma the morning after Toby died, I thought he might only be the second or third worst cat in the universe now, and he may even work his way up to best cat status when we least expect it.
at September 12, 2015 No comments: