About the "Captain Confederacy" who wants to #BoycottStarWarsVII

As noted at Strange Racist Hashtag #BoycottStarWarsVII Exposes the Worst | Complex, twitter user @2partyhoax is using the cover of Captain Confederacy #1 to make rightwing rants about Star Wars, leftists, and social justice warriors. I left this comment at the article:


I'm amused to see one of them using the cover of an issue of Captain Confederacy as an icon. Obviously, they didn't read it—it's the story of a white man and a black woman who become lovers as they fight to overthrow a racist government in a world where the Confederacy won.


Have you read the comic you use for an icon? It's about a white man & a black woman who become lovers & overthrow a racist CSA.

He (I assume for no reason at all, because I know very well that women can be loud rightwingers too) replied:


I've re-appropriated it back! Tit for tat! You SJWs got Star Wars but I took Captain Confederacy back!

That amused me, so I replied:


I grin. If it's any comfort, I prob'ly despise SJWs as much as you do, only I do it from the left.


Well, the #AltRight has plenty who have come from the Left. You're welcome to join anytime!

And I left things there because I have no interest joining an #AltRight, a #NewRight, a #RebrandedRight, or any form of right-politics at all.

But I will be using the black female Captain Confederacy as a twitter icon until this particular kerfuffle quiets down. I don't know if #BoycottStarWarsVII is sincere or an elaborate goof because it just seems ridiculous to me, and I'm very aware that the only law on the internet is Poe's Law.

As for Star Wars, I wish Harrison Ford had gotten his wish and Han Solo had died at the end of Star Wars 2, leaving Lando Calrissian to become the guy who gets the princess in the next movie. I hope he makes an appearance in the new series, perhaps as the dad of the new black star, and if they're doing one-shot movies now, Lando deserves one too. 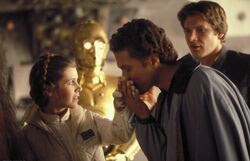 ETA: As the Class Guy, I'll note that any essay about class and race in Star Wars should include something about the working class Han competing with the ruling class Lando for the love of a princess.

ETA 2: Yep, looks like it was just trolling for lulz: #BoycottStarWarsVII and Why the Internet Is Trolling Itself to Death
Posted by Will Shetterly at 11:53 AM