Mass murderers expect to die. When cornered, some kill themselves and some do their best to die by suicide by cop. But some surrender, and some are prevented from having the death they want.

Anti-racist internet memes insist that being taken alive is an example of "white privilege" for white murderers. A few minutes of googling shows that isn't so. Some examples:

John Allen Muhammad, a member of the Nation of Islam, and his younger accomplice, Lee Malvo, were serial killers who targeted white people in the hope of starting a race war. They killed 17 people and wounded 10 others. More: Beltway sniper attacks.

Hastings Wise killed four co-workers. Like many spree killers, he then tried to kill himself, but he was found alive. More: Hastings Arthur Wise.

A handy list of white victims of police abuse, or Why #BlackLivesMatter should be #AllLivesMatter

ETA (from the comments):

Of the last 20 mass killings of that period, 9 were perpetrated by non-whites.

That would be 45 percent, which exceeds non-whites’ 37 percent share of the population.

Of the last 30 mass killings, 11 were committed by non-whites — right at the 37 percent mark.

And what if we go all the way back to 1982? We then have 66 mass killings in which the races of the perpetrators were known, and 22 of them, or one-third, were at the hands of non-whites. Note here that America’s demographics have been changing, with non-whites comprising only about 20 percent of the population in 1982; thus, if we consider an approximate average non-white population of 28.5 percent during the 31-year period in question, it appears that, again, mass murderers are slightly disproportionately non-white.

In other words, there is no evidence whatsoever that mass killings are a characteristically white phenomenon.

And there never was.

Posted by Will Shetterly at 4:57 PM No comments: Links to this post

Malcolm X's response to identitarianism (after he left the Nation of Islam)
Posted by Will Shetterly at 10:29 AM No comments: Links to this post

Martin Luther King's response to identitarianism
Posted by Will Shetterly at 9:38 AM No comments: Links to this post

Batman and Robin stand up for Sportsmanship!—opposing bigotry and racism in 1949 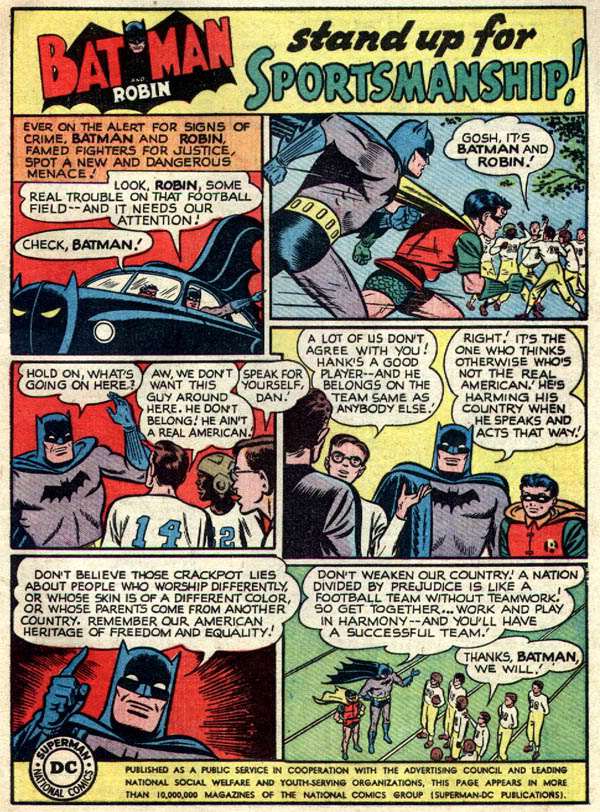 Posted by Will Shetterly at 10:23 AM No comments: Links to this post 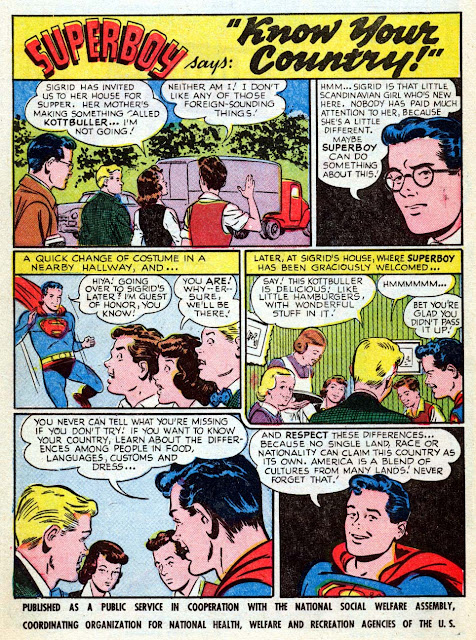 Posted by Will Shetterly at 9:51 AM No comments: Links to this post

This is a cartoon response to xkcd: Free Speech. It's the short comics version of an earlier blog post, XKCD doesn't understand free speech—or the difference between legal and moral rights. 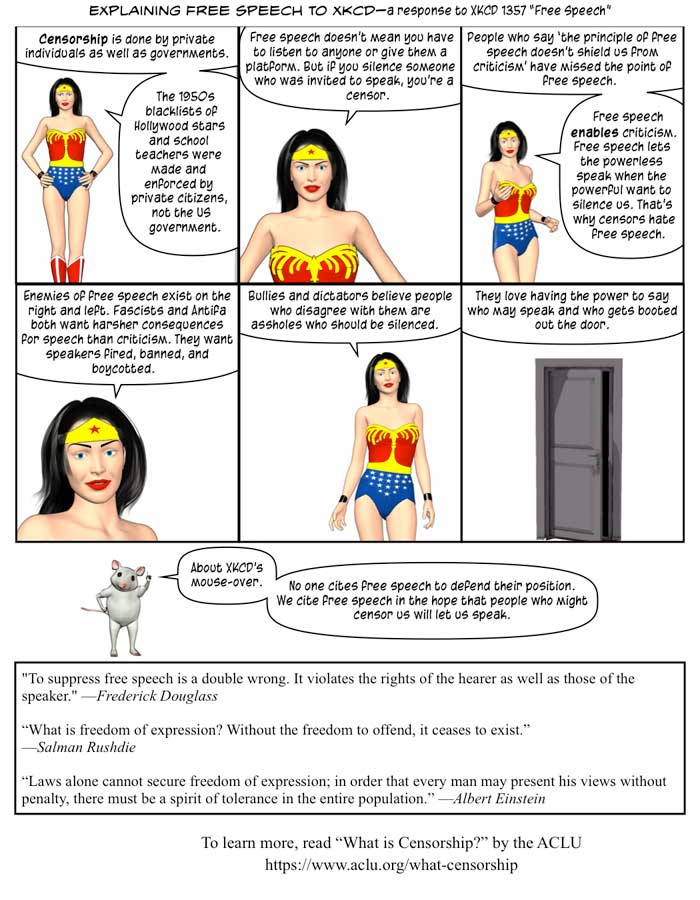 Posted by Will Shetterly at 3:47 PM No comments: Links to this post

An update on standing desks and ergonomics for writers

One of my popular posts continues to be my standing desk. For the last couple of years, I've been using a different reconfigured Ikea desk that's been discontinued, but now my work needs have changed, so I'm looking at new options.

Also, a friend mentioned that her boyfriend has been getting a lot of tension in his back while he works. The first thing I told her was that ergonomics matter. Many writers suffer physically for their art; I knew one who literally ruined his back meeting a deadline for a novel. If you don't want a standing desk, make sure your seated working arrangement is good and get up and stretch every hour or so. Ikea has a good short pdf on office ergonomics.

If I was getting a standing desk today, I would almost certainly choose Ikea's $269 US hand-crank SKARSTA Desk sit/stand: 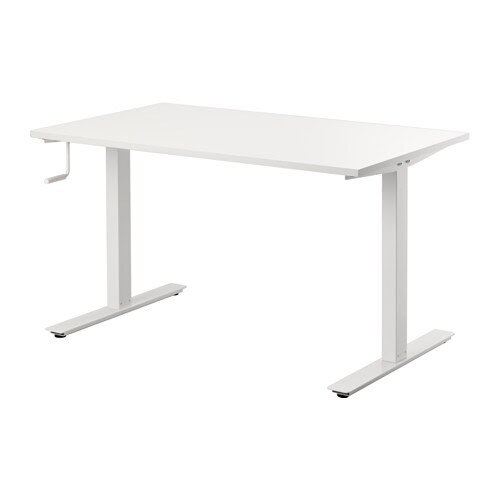 If it wasn't a little large for my current work space, I would probably be on the LRT to Ikea to get one now. I'm hoping it'll be very popular so they'll make a smaller one.

If you're primarily a laptop user, the $49 US IKEA PS 2014 Standing laptop station looks promising.

Ikea also has a more expensive electric sit/stand desk, the BEKANT Desk, which has been both praised (IKEA Sit/Stand Desk Review: I Can't Believe How Much I Like This) and panned (IKEA Bekant Stand Up Desk Review).

Is This The Cheapest Standing Desk Hack Yet? | Lifehacker Australia

(Why Google decided I was Australian, I haven't a clue.)

(And no, I don't get paid by Ikea. I'm just a fan of good cheap products.)

ETA: If you prefer to sit, consider switching from a chair to something like the NILSERIK Stool. I'm very fond of mine. (Y'know, Ikea should pay me.)
Posted by Will Shetterly at 9:54 AM No comments: Links to this post

Beulah resumes on Friday with a new schedule

I would love to produce daily installments, but life is too lifey to allow that now. (Not in bad ways. Just that I've got half of the cats in the herd at the moment, so I need to leave them and round up the other half.)

The next installment should be on Friday. I suspect I'll go to a Monday-Wednesday-Friday schedule after that, but I'm not committing to anything yet.
Posted by Will Shetterly at 1:14 PM No comments: Links to this post

Since I haven't decided what "one Beulah" is, I'm not sure that you'll be able to tell that you're getting two installments tomorrow, but you are.

A friend shared Highly sensitive people: a condition rarely understood. It looks like HSPs are a thing now, at least on the internet. My feelings, as usual, are mixed. At the friend's page, I said,


I'm wondering if HSPs are more or less likely to be abusive. My guess is the introverts would be less likely and the extroverts, more. I may need to do a little more reading about what Zeff calls the "insensitive highly sensitive person".


My apologies for bringing up an ugly image, but I'm now wondering how many people who have done the worst things were artists or exhibited other symptoms of being HSPs. Yes, Godwin's Law applies here. I confess I'm sure, knowing humans, that some people will decide they are HSPs and therefore superior, while at best it only means they (or we, because I recognize those symptoms too) are different.

I'm developing a theory that the angry people the internet calls SJWs are a subset of insensitive highly sensitive persons. There may be something about privilege that creates IHSPs—the most self-obsessed people I know are rich people who surround themselves with beauty and would rather donate to the arts than to the poor. Of those, the ones who talk of injustice talk in terms of identity, which protects them from the possibility their privilege is a problem.

Now, I'm not denying that I may be among the IHSPs. I'm just not sure what my subset is.

Thinking about Insensitive Highly Sensitive People inspired me to google for art by the one of the worst of them. If the best of 25 Rarely Seen Artworks Painted By Adolf Hitler are actually by Hitler (apparently, there are forgeries out there), he wasn't a bad painter. It's a shame he gave it up.
Posted by Will Shetterly at 5:59 PM No comments: Links to this post

Machiavelli on the danger of believing exiles

Via In Defense of the Late Ahmad Chalabi:


chapter 31 of Niccolò Machiavelli’s book Discourses on Livy, “How Dangerous It Is to Believe Exiles”:

"How dangerous a thing it is to believe those who have been driven out of their country. … Such is the extreme desire in them to return home, that they naturally believe many things that are false and add many others by art, so that between those they believe and those they say they believe, they fill you with hope, so that relying on them you will incur expenses in vain, or you undertake an enterprise in which you ruin yourself. … A Prince, therefore, ought to go slowly in undertaking an enterprise upon the representations of an exile, for most of the times he will be left either with shame or very grave injury."

Posted by Will Shetterly at 1:10 PM No comments: Links to this post

For conservatives who compare SJWs to Maoists

I just left this comment elsewhere: Their tactics are more McCarthyite than Maoist. This is an authoritarian issue, not a political one.

If you believe that socialists do not value free speech, here's one of my favorite socialists on the subject: George Orwell: The Freedom of the Press.

And here's a longer blog post of mine: The curious contradictions of censorial socialists, and a few comments about Charlie Hebdo
Posted by Will Shetterly at 10:13 AM No comments: Links to this post

A test illustration that pleases me: 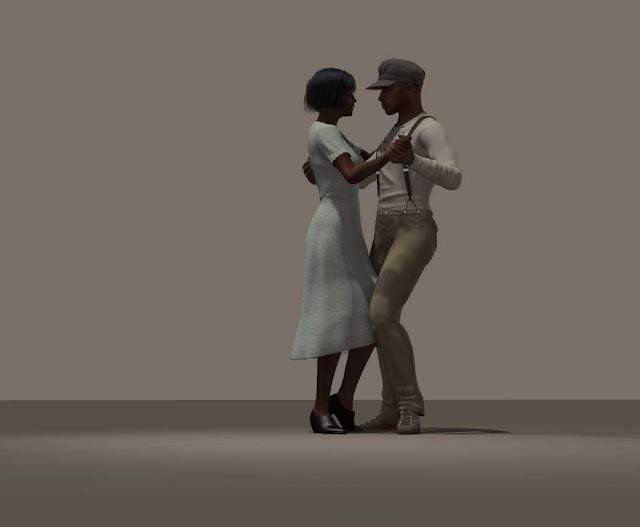 Posted by Will Shetterly at 12:28 AM No comments: Links to this post