Defining "superhero" and why Fantomah isn't quite one 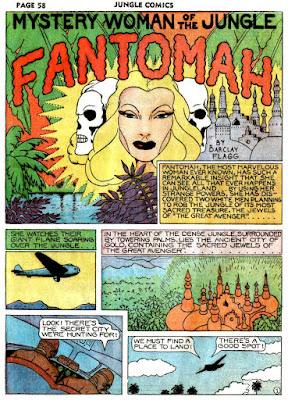 Pappy's Golden Age Comics Blogzine: Number 1847: “Crime doesn’t seem to pay.” reprints a Fantomah story. She's been called the first superheroine, and while she's among the characters I'd like to write someday, I don't count her as a superhero. She's like the Spectre, a supernatural being whose powers are so great that her stories tend to boil down to "Baddie does badness, then main character does weirdness to baddie." Until I started thinking about Fantomah, I thought a superhero must:


1. Originate in a visual literary medium, either a comic strip or comic book.
2. Seem to have abilities greater than the average human.
3. Use a pseudonym.
4. Have a distinctive appearance when using that pseudonym.
5. Be dedicated to making the world a better place.

By that definition, characters like Mandrake the Magician are superheroes: he's from newspapers, he uses hypnosis, he has a public persona, he wears his stage clothes when he goes into action, and he uses his abilities for good.

Fantomah falters on my third requirement. Though she was an Egyptian princess once (don't ask about the blondness), there's no sense that Fantomah is a second identity to her; it's effectively her only identity. Superheroes don't necessarily keep their off-duty identities secret, but they have lives beyond superheroing. Superman's real identity isn't Superman or Kal-El; he's Clark Kent, a kid who came to America as a baby and discovered his powers and unusual history, but those things don't change the fact that he's Clark, Jonathan and Martha's boy from Smallville. Bruce Wayne may wish he could be Batman most or all of the time, but he's still Bruce, the billionaire playboy who likes being a billionaire playboy. Wonder Woman is an ambassador to "man's world", but ambassadors aren't on duty all the time; she needs her ordinary life as Diana, a woman with friends and lovers.

Fantomah, as a jungle character, owes a little to The Phantom. You might argue that the Phantom has given up his ordinary life to be The Phantom, but The Phantom's stories emphasize his humanity: each generation of Phantoms grows up, marries, has kids, and raises those kids to be the best they can be. The Phantom is a strange combination of Tarzan and the Lone Ranger, and like them, he's isolated, but he has people around him who matter to them.

Thinking about this made me realize I have one more requirement for a superhero. A superhero must:


6. Try to live a normal human life while accepting the responsibility that comes with great power.

And that's where Fantomah and the Spectre fall short of being superheroes. They may be super and they may be heroes, but they show no interest in being human.
Posted by Will Shetterly at 11:25 AM