Some of the people I admire most in the world think Charlie Hebdo is racist because they believe anyone can look at an image and know what it means. If you want commentary by people who know more about French culture than I do to explain why outsiders misread Charlie Hebdo, follow the links at For anyone who thinks Charlie Hebdo is a racist magazine.

Today I'd prefer to focus on the notion that cartooning is a universal language by looking at speed lines, aka motion lines. Wikipedia says Ernest Montaut created them at the turn of the 20th century to make his auto posters more dynamic.

Montaut uses speed lines the way I'd always seen them in the comics of my youth: the lines go behind an image to indicate the direction it's coming from.

In the '70s and '80s, Japanese comics began to show up in the US. They were exciting to American fans because they had different subjects than American comics and they used different techniques. But those techniques were initially hard for us to read. Case in point: they used speed lines differently, sometimes putting them in front and behind a character, sometimes putting them only in front of one.

Here's an example from Real, volume 2 by Takehiko Inoue: 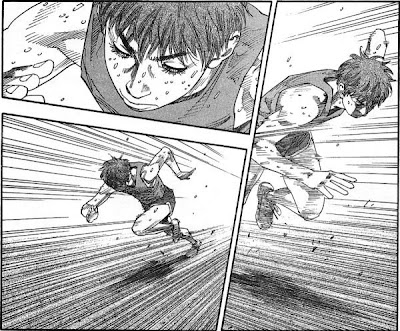 A manga fan would have no trouble deciphering those panels: the runner is very fast. But to someone who only knew the American and European traditions, many possibilities occur: Is the runner being blown backwards by a powerful wind? Is he running slowly forward into the rain? Is he being murdered in a hail of bullets? I've read the occasional manga for decades now, but I read it as a second language of comics that I don't know as well as my first.

The next time you assume you know what a picture means, please check the context. Including the cultural context.
Posted by Will Shetterly at 10:27 AM