First, a short rant about conformity:

Nonconformity usually manifests itself as an alternative conformity: all groups have styles to make its members recognizable to each other. In my youth, the main groups were hip and straight—"straight" only began to have a primarily sexual meaning after the gay liberation movement grew strong at the end of the '60s. Straight culture had recognizable variants like jocks, hip culture manifested differently in black and gay communities, but the subcultures were still clearly part of their greater alignment because, for the most part, subgroups supported their greater group. Even true outsider cultures such as the nerds who didn't know how to fit into the dominant groups were recognizable by choices they made with their hair and clothing—people who say clothes and hair aren't important to them tend to be lying to themselves, which you can test by offering to put them into the clothes and hairstyles of other groups.

That said, my point isn't that true nonconformity may be impossible. It's only that conformity manifests in many ways, some overlapping, some contradictory.

Last night, I came across a post on Facebook where a feminist insisted two women who thought her outfit was funny were suffering from "internalized misogyny." I commented,


Conformists laughing at nonconformists is an ancient tradition that has nothing to do with sexism. As a long-haired kid in the '60s who got this crap all the time, I know this too well.

The person who shared the post argued that women have been under more pressure to conform than men. I suppose I could've simply disagreed with that: men don't get a pass on conforming, as was literally beaten into me at the age of fourteen by a group of boys who called me a goddamn hippie. But I asked,


Was it internalized misandry when I was mocked and threatened by men for not conforming?

The OP didn't see I was joking a little and declared internalized misandry didn't exist, and that when men are mocked, the mockery includes the implication they are somehow feminine, so men mocking men is misogyny.

Now, what I didn't see clearly enough at that point was this: Yes, conformists often mock male nonconformists as being female somehow. This was especially true in my generation, which was the first to seriously blur gender roles: cool kids of all genders had the same hairstyles and wore nearly identical clothing, with a few optional exceptions like miniskirts for girls. But to gender reductionists, gender-based insults are all about gender, while to the rest of us, gender is only one of many ways conformists expect people to conform. When I was obviously an outsider as a long-haired boy in bell-bottoms and brightly colored shirts, I didn't just get gender-based insults—girl! faggot! I got race-based insults—nigger! nigger-lover!—and politically-based insults—commie! pinko! red!—and nationalistic insults—traitor! America-hater!

To put this in terms identitarians should understand, those insults were intersectional. Prioritizing gender misses the point. People like me were a threat to everything the conformists believed America should be, so they chose insults based on what didn't fit their vision. What underlay all the insults was "Nonconformist!"

But last night I only asked,

When someone drove by and threw a bottle at my head and yelled "Hippie!", was that misogyny too?

One commenter said mocking flappers was obviously misogyny, so I said,


Zootsuiters were largely Hispanic, so that was racism. If you actually knew what you were talking about, you'd know that.

There's a strong relationship between ignorance and arrogance with cultists. I noted,


Zootsuiters in California included Hispanics, but people of all races wore zootsuits. A famous example: Cab Calloway. Not as well-known, but if you've read his autobiography you may remember it: Malcolm X. Here's a 1942 Life article that shows some white zootsuiters.

To save you googling that, here's a screen cap: 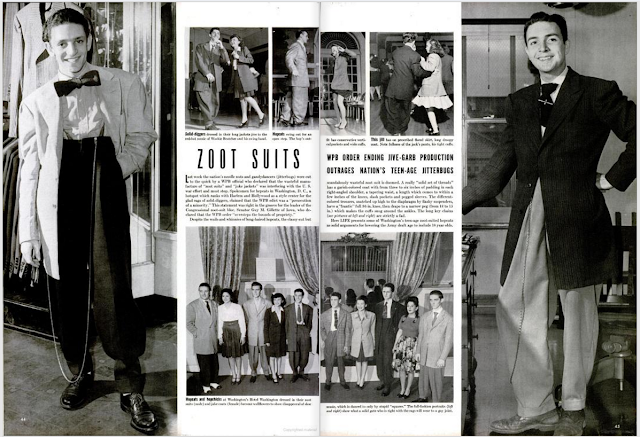 Then I asked a question that the OP never answered:


Yeah, cite two black men, and some pics of ostensibly white (possibly just passing) unnamed people. Completely ignore the fact that not only was it a trend *born of* Latin American communities, even at the height of its popularity, was still largely associated with racial minorities.


Oh, we agree that conformity by definition includes gender roles—conformists used to say of the hippies that they couldn't tell which was the boy and which was the girl. The question is whether it's misogyistic for men to break gender roles; if so, you'd think it would be misandristic for women to break them. And even more specifically, why assume that two conformist women are being misogynistic when they think someone's outfit is amusing?

And I shared a couple of videos to show zoot suits weren't a primarily Hispanic phenomenon:


I did a little googling because you got me curious about the origin of the zoot suit, and there are a number of theories, but none of them claim it began in the Hispanic community. Most likely, it began in the black community and spread with the big bands, but there are white contenders for the originator too. The pachucos picked it up from whoever started it. You might like this: Pachuco - Wikipedia

Around then, I noticed that I had missed one of her comments:


Blanche Callow is the reason her brother had a career -- biggest influence in his life, but het little brother is the one who had the fame.


Forgot to thank you for the mention of Blanche Calloway, whose work I hadn't heard. Yes, many famous people had less famous older siblings. Look at Michael Jackson's less-known older brothers.

And we left it there. But for anyone researching this, France's Zazou subculture, like the Pachucos, came from the hepcats in zoot suits. The Zazous got their name from Johnny Hess's "Je Suis Swing", which clearly owes a huge debt to Cab Calloway:

Posted by Will Shetterly at 1:58 PM