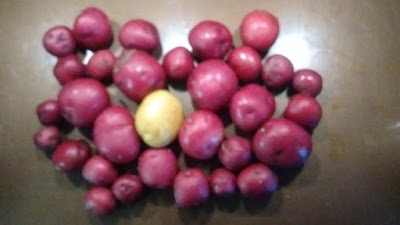 This morning's first lesson is to make sure pictures are in focus. The fuzzy pic above is three pounds of potatoes.

The second lesson is to buy potatoes of about the same size, if possible. It would've been fine to boil these uncut until the largest ones were done, but I wanted to trim the imperfections, and since I was cutting, I chopped them all to about the same size on the theory that would be efficient, but in retrospect, I just made busywork for myself.

Eating nothing but potatoes has its stunt value, but it's not a healthy long term diet. I'd like something I can stick with until I hit my target weight, then use as a basis to maintain that weight. I've modified yesterday's plan after reading The Straight Dope: Could I survive on nothing but potatoes and milk?. The healthy Irish peasant diet was based on potatoes, milk, and oatmeal.

For the sake of the stunt, I'll stick to potatoes today. Tomorrow, I'll begin a proper Irish peasant diet that starts with oatmeal and milk, then consists mainly of potatoes for the rest of the day.

ETA: I just realized I should've weighed myself yesterday. At noon today, I'm at about 182 pounds. (Our analog scale isn't the most precise.)
Posted by Will Shetterly at 9:52 AM