The following links are from the first hits from "Clinton attacks Sanders" and some Twitter discussions. If you want more, Google's your pal.


Hillary Clinton took aim at Bernie Sanders' single-payer health care plan on Monday, characterizing it as "turning over your and my health insurance to governors," specifically naming Republican Terry Branstad. It's a pretty clear reference to the many conservative states that have refused ObamaCare's Medicaid expansion — implying that Sanders would allow conservative states to opt out of his plan, and hence partially destroy all federal health insurance programs. This is absolutely false.


Beyond this Hillary should stop attacking Bernie, especially when she says things that are untrue, which candidly she often does. I am one of the people with credibility to suggest Bernie people support her in November, and she and Benenson and others have no idea of the damage she does to herself with these attacks, which she does not gain by making.


"Aiming her remarks at viewers watching on Univision, a Spanish-language sponsor of the debate, Mrs. Clinton threw his past support for Fidel Castro and President Daniel Ortega of Nicaragua in Mr. Sanders’s face and repeatedly criticized him for opposing a 2007 bill that would have created a path to citizenship for millions of immigrants in the country illegally.

“We had Republican support,” Mrs. Clinton said. “We had a president willing to sign it. I voted for that bill. Senator Sanders voted against it.”

She refused to let up when Mr. Sanders explained that he thought the guest worker provisions in the bill were “akin to slavery.”

Hours after losing the Wisconsin primary, Hillary Clinton fired a barrage of charges at Sen. Bernard Sanders on Wednesday, questioning his commitment to the Democratic Party and accusing him of enabling the gun industry to arm mass killers, as she seeks to regain liberals’ backing.

Related: A reminder for Clinton fans that the polls were right all along

ETA: If I've missed any major ones, please leave a link in the comments and I'll add it.

ETA: 15 of the 16 negative stories that the Washington Post ran about the Sanders campaign over a 16-hour period: 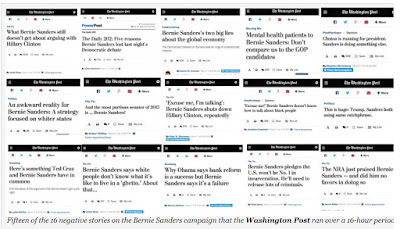 (click to enlarge)
(pic thanks to Tammy Kosiancic!)
Posted by Will Shetterly at 12:15 AM