2. The Rebel Jesus - Two Stories of One Birth 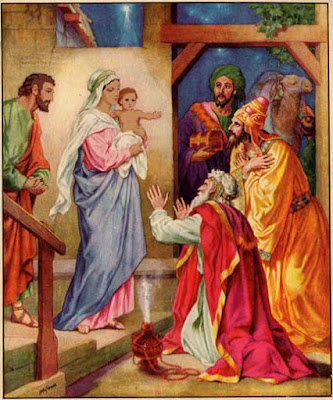 The Gospel of Matthew says the life of Jesus begins while King Herod rules Judea.

In Matthew’s story, Joseph the son of Jacob lives in Judea in the town of Bethlehem. He learns his wife Mary is already pregnant when she comes to live with him. Wondering if he should send her away, he goes to sleep. When he wakes, he decides to keep her and raise the child as his own.

After Jesus is born, three priests come from the Parthian Empire and give the baby presents of gold and rare perfumes. They say he will be the king of the Jews.

King Herod the Great hears about this. Believing the boy may be a threat to his rule, Herod sends soldiers to kill every boy in Bethlehem who is two years old or younger.

Joseph and his family flee to Egypt. When they hear Herod is dead and his son Archelaus rules Judea in his place, Joseph wants to go to home but fears Herod’s son is a danger to Jesus. So Joseph settles in Galilee in the town of Nazareth. 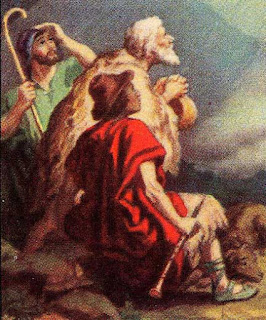 The Gospel of Luke says the story of Jesus begins when Quirinius orders everyone to go to their family homes to be counted in a census.

In Luke’s story, Joseph the son of Heli lives in Galilee in the town of Nazareth. He takes his pregnant wife Mary on the long trip south into Judea. When they arrive in Bethlehem, Jesus is born. A feeding trough is used for his bed.

Shepherds come to see the baby. They say he will be an anointed one, a savior of the Jews like King David in the Book of Samuel and the Emperor Cyrus in the Book of Isaiah.

Joseph and Mary take the child to the Temple at Jerusalem and dedicate him to God. A holy man and and a holy woman at the Temple each say the boy will grow up to do great things.


The problems with Matthew’s story?

1. When Judea was divided after Herod's death, his son Antipas became the tetrarch of the central region, which included Galilee.  If Herod's children were a threat to the baby, he would not be safe there.

2. The historian Josephus wrote about many horrible things Herod did, but Josephus does not mention babies being slaughtered in Bethlehem.

The problems with Luke’s story?

1. Luke says Herod was alive at the time of Quirinius's census, but the census was ordered ten years after Herod’s death, when Archelaus was banished for abusing his power and Rome installed the first of many Roman governors in the province of Judea.

2. Quirinius’s census, like any census, counted people where they lived. Having people travel to the place their families would be an unnecessary disruption in people's lives.

3. If the census had required people to travel to be counted, it only affected people in the province of Judea. No one would have had to travel from Galilee.
Posted by Will Shetterly at 8:00 AM