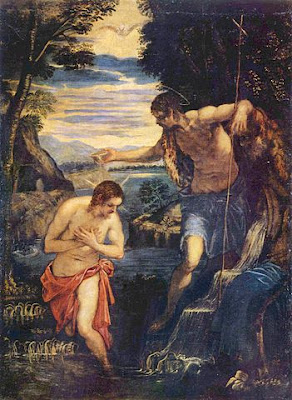 The story of one rebel starts with the end of another, John the Baptist. His title means he baptized people, washing away their sins in a ritual bath.

Mark starts his story by telling about the Baptist living in the country near the Jordan River. He wears simple clothes and eats simple food. Many people come to hear him teach and be cleansed of sin. John washes Jesus, and then Jesus goes into the desert to meditate.

John also starts his story by telling about John the Baptist. Rich Judeans send priests and Temple guards to John, demanding to know who he is and what he is doing.

John answers by quoting Isaiah, “I am the voice of one calling in the wilderness, ‘Make straight the way for the Lord.’”

That's a rebel’s answer, a cry that the maker of the universe has declared the current order is wrong and must be set right.

Matthew starts his story with Jesus's birth, but before Matthew tells about the adult Jesus, he tells about crowds going to the Baptist. Among them are Sadducees and Pharisees. The Baptist calls them “children of vipers” and demands they change their ways.

That's a rebel’s answer, a rejection of the elite who prey on Palestine's people like snakes. 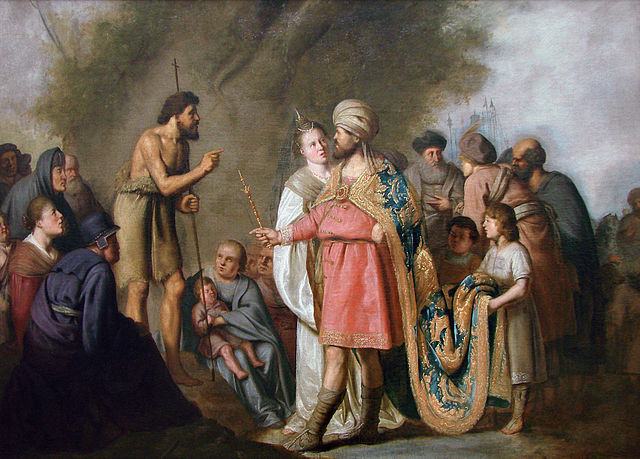 Luke also starts his story with Jesus's birth, but Luke links Jesus and John before either is born. Luke says the pregnant Mary goes to stay with her pregnant relative Elizabeth. When Elizabeth sees Mary, the unborn John leaps in her womb to acknowledge that Jesus in Mary's womb is a miraculous child. In Luke's story, John is only six months older than Jesus, but, as in the other gospels, John is still the first to become famous, and Jesus goes to him to be washed.

Luke tells what the Baptist teaches.

The crowd asks, "What should we do?"

John answers, "If you have two shirts, give one to someone who has none. If you have food, do the same."

A tax collector asks, "What should we do?"

John answers, "Take no more from people than you're supposed to."

A soldier asks, "What should we do?"

Telling their servants, the tax collectors and soldiers, to be honest?

That's a rebel’s answer, an accusation that the current social order is not just.

The Baptist’s teachings, his isolation from Judean society, and his criticism of Judea’s two largest sects imply he was a member of the third, the Essenes. Only one detail argues against that. Matthew says John lived on locusts and honey. If so, he was an unusual Essene because Essenes were vegetarians.

But the oldest copies of Matthew are in Greek, and the Greek word for locusts, akris, is very close to the Greek word for flatbread, egkris. What John ate may have been misspelled in an early manuscript and faithfully copied ever since.

Or perhaps John's group of Essenes were not strict vegetarians.

This we know: The Baptist's teachings made poor people love him and rich people fear him. He lived by the Jordan in Perea, where Rome's servant was Herod Antipas, tetrarch of Perea and Galilee. Antipas married Herodias, the former wife of his brother Philip, and the Bible says John called that incest. 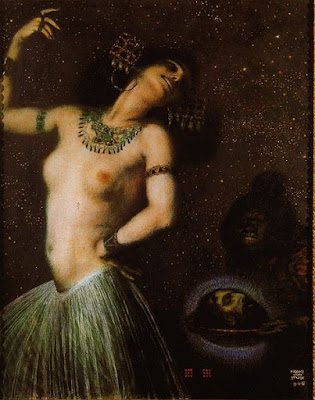 Then Herodias's daughter, Salome, dances at a feast. Antipas is so pleased that he tells her, "Whatever you ask, I'll give you, up to half of my kingdom."

Salome asks her mother, "What shall I ask?"

Herodias replies, "The head of John the Baptist."

Antipas is not willing to go back on his word in front of his guests, so the Baptist’s head is given to Salome on a platter.

Josephus tells a simpler story. He says Antipas was afraid the Baptist would raise a rebellion. He had John imprisoned at Macherus near the Jordan River, then killed.

Some of John's students went with Jesus. Others stayed true to John and his teaching. Today, the Baptist is revered by Mandaeans, a gnostic sect numbering about 70,000 people worldwide. They call Jesus an apostate. Considering how Jesus's path diverged from John's, that's understandable. The gospel writers are reluctant to say why Jesus was washed by John like all who went to went to hear him, but the Mandaeans say clearly that Jesus was a student of John's who went his own way.

What Jesus did when he was young and why he felt he needed to be washed by John, the Bible does not suggest. Mark, whose gospel is the oldest in the Bible, tells his story without explanations:


In those days, Jesus came from Nazareth of Galilee, and was baptized by John in the Jordan. Immediately coming up from the water, he saw the heavens parting, and the Spirit descending on him like a dove. A voice came out of the sky, “You are my beloved Son, in whom I am well pleased.”

In Mark's story, Jesus is not called God's son until John washes him. The later gospel writers were clearly troubled by what that implied. That Jesus was washed by John must have been too well known for the writers to omit, so they said Jesus was washed by John to fulfill a prophecy. That was enough of an answer for them. They never asked why one son of Abba needed to be washed by another before he could do what God expected.

All four gospels make one thing clear: Jesus began under the influence of a man who died a rebel's death, killed by Rome's approved ruler for criticizing the ways of the rich.
Posted by Will Shetterly at 8:00 AM