A warrior in the whisper wars

I've spent the last few days dealing with an unpleasantness that may never go public but is undoubtedly fodder for fandom's gossip mill. For now, I'll share this bit from a letter I sent to address it:


I know that I have a long history of disagreeing online with the genre's more vocal neoliberal identitarians, but so far as I know, my only offline manifestation of that has been to ignore a few people when I see them at conventions. If I am accused of behaving like [redacted] or doing anything that might make anyone think I am not safe to be around, I would greatly appreciate hearing about it. If I've forgotten something I did, I'll own it. If it's just more of the wild gossiping that bedevils this community, I'd like to refute it. The only thing I do not appreciate is precisely what's happened here, being judged and condemned in absentia for a crime I've not been charged with.

I also included a mention of Kafka, because whisper wars are always Kafkaesque. If you try to find out exactly what you're accused of, you find yourself in a dreamscape where nothing stays firm.

The lack of firmness should be significant in fandom's whisper wars. At least since Zathlazip endured doxxing and death threats in 2008, the identitarians have been rigorous in making screen captures of anything that could be interpreted as offensive. Logically, if a screen cap does not exist, what's claimed did not happen—or if it did happen, it was deleted too quickly for anyone to make a screen cap.

Yes, screen caps can be forged, but to the best of my knowledge, that hasn't happened. Most people caught up in gossip wars are honest in the sense that they don't share what they know to be false. They only promote lies when they don't verify a story before passing it along. They assume that where there's smoke, there's fire, which is not always true, and when true, is sometimes the work of an arsonist. (I kept track of hoax hate crimes for a while, then quit because the subject is so depressing. What's most depressing is wondering how many hoax hate crimes are never exposed.)

Well, the folk wisdom is true: haters gonna hate. Having responded in kind once, I hope I never will again. The greatest gift you can give bad people is endorsing their tactics.

Respect everyone: the wisdom of St. Peter and Malcolm X

A little more about St. Peter's and Malcolm X's "Respect everyone"

The Titanic had at least two black passengers, and more if you count one passenger's children.

1. Joseph Laroche's story is told in Was a Black Man on the Titanic? His white wife and their daughters were saved. He was not. Don't blame race for his death—many of the men stayed behind so more of the women and children could survive.

There's some debate about whether the Laroches endured racism on board the ship. From Black People and Titanic: The Reality – Dani Course – Medium:


...a letter that Juliette wrote to her father while the Titanic was at Queenstown, Ireland, paints a different picture. She did not mention any racially motivated incidents directed at her or her family. In fact, she wrote that they had become acquainted with another French family, whom they had traveled from Paris with on the train and dined with onboard the ship. She also wrote that “the people onboard are very nice.” It should be kept in mind, however, that when Juliette Laroche wrote her letter, she and her family had been aboard the ship for less than 24 hours. They would spend four more days at sea — plenty of time to experience the conditions outlined by Hughes and the Inquirer.

The Laroches were well-off; the Medium article includes this:


Initially, the family was to travel on the French liner La France, however the liner’s strict policy required children to remain in the ship’s nursery during meal times, which didn’t appeal to the Laroches. They exchanged their first-class tickets for second-class tickets on the Titanic.

2. Victor Giglio, the personal secretary to Benjamin Guggenheim, traveled first class. It's said the two men chose to die like gentlemen, drinking brandy together. The writer of Titanic Anniversary Sheds Light On Passengers Of Color: Who Were They? suggests Giglio wouldn't have been able to get a place on a lifeboat because of the color of his skin, but since rich white men also couldn't get seats, it's impossible to guess whether class would've trumped race in a choice between a white third-class passenger and a black first-class one.

3. Shine was the Titanic's mythical black crewman. In folk hero fashion, he swam all the way to New York. There's more about him in Was a Black Man on the Titanic?

Harvard University Admits Highest Number Of Black Students In School's History | The Huffington Post: " Almost 12 percent of the total applicants who were offered admission next fall are black"
Most Black Students at Harvard Are From High-Income Families: "In a 2004 interview Professor Henry Louis Gates Jr., director of the W.E.B. Du Bois Institute for African and African-American Research at Harvard, told the London Observer, “The black kids who come to Harvard or Yale are middle class. Nobody else gets through.” "
Posted by Will Shetterly at 12:25 PM

The Case for Contamination - The New York Times:

Besides, trying to find some primordially authentic culture can be like peeling an onion. The textiles most people think of as traditional West African cloths are known as Java prints; they arrived in the 19th century with the Javanese batiks sold, and often milled, by the Dutch. The traditional garb of Herero women in Namibia derives from the attire of 19th-century German missionaries, though it is still unmistakably Herero, not least because the fabrics used have a distinctly un-Lutheran range of colors. And so with our kente cloth: the silk was always imported, traded by Europeans, produced in Asia. This tradition was once an innovation. Should we reject it for that reason as untraditional? How far back must one go? Should we condemn the young men and women of the University of Science and Technology, a few miles outside Kumasi, who wear European-style gowns for graduation, lined with kente strips (as they do now at Howard and Morehouse, too)? Cultures are made of continuities and changes, and the identity of a society can survive through these changes. Societies without change aren't authentic; they're just dead.

An article to cite when you want to show Fox News, the Mirror, and the Daily Mail are unreliable


While more reputable sites like the New York Times or Washington Post don’t appear to be running with this nonsense story, many other widely read news outlets like the Mirror and the Daily Mail ran with it. Even Fox News ran a Sun article on their site.

Of course, this doesn't mean the Times or the Post are reliable either. No site is perfect, and they all are subject to spinning the facts to fit their ideologies.
Posted by Will Shetterly at 11:24 AM

On Charging Bull and Fearless Girl, and the ethics of creators 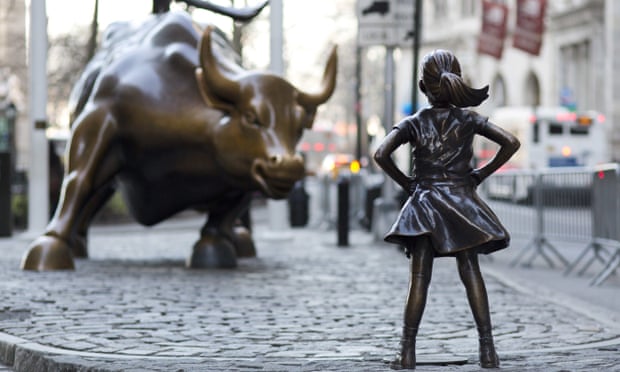 Putting Fearless Girl in front of Charging Bull made a clever mash-up, but as a creator, I have more sympathy for Charging Bull's artist than many seem to. He made a great piece of art. Then another artist came along and placed her work where it made his subordinate to hers. Would you put a beautifully carved statue of a TV near the Mona Lisa so it looked like she was smiling at it?

This reminds me that ethical graffiti artists don't paint over other artists' work.

I grant that people who love this want a more diverse Wall Street, while I want an end to Wall Street. They want a Girl who will join the Bull. I want a kid who will kill it.


Since being placed opposite the bull, on the eve of International Women’s Day, the Fearless Girl – hands on hips, ponytail swinging – has been the subject of a million concerned pieces about the misuse of art, the infantilisation of female ambition, and the kind of fraudulent feminism that promises little girls, if they work hard, they can grow up to be bankers.


"...the multitrillion-dollar financial firm that commissioned and installed “Fearless Girl” still has only three women on its 11-member board.

...The strain of female success that “Fearless Girl” champions most specifically — More women in the boardroom! More women on Wall Street! More women at the top! — is also the one most aligned with the capitalism-loving, individualistic ethos of the bull itself."

ETA: seriously, the guy has a point | gregfallis.com
Posted by Will Shetterly at 10:32 AM

The notion of a safe space as protection from challenge raises other issues, too. In 2104 a student group at Brown University organized a debate about campus sexual assault between the feminist Jessica Valenti and the libertarian Wendy McElroy, a critic of the notion of ‘rape culture’. Fearing that the debate would be too upsetting for some, a ‘safe space’ was set up, equipped with cookies, colouring books, bubbles, Play-Doh, and a video of frolicking puppies, as well as counsellors. One of the students who helped set up, and make use of, the safe space, went to listen to the debate at one point, but quickly returned to the safe space. ‘I was feeling bombarded by a lot of viewpoints that really go against my dearly and closely held beliefs’, she said.

Posted by Will Shetterly at 6:04 PM

On Facebook, Jonas Kyratzes shared Things Are Not OK. In the comments, Jay Tholen mentioned his childhood growing up in poor neighborhoods and said,

I was a Limbaugh-listening conservative at 18 and know how completely validating it is to see the liberal mainstream characterize you as a hateful idiot. It entrenched me in my belief that I was fighting against some elite star chamber. The only time I started questioning my political ideologies was when folks from the left befriended me and we had conversations.

Posted by Will Shetterly at 1:27 PM

Posted by Will Shetterly at 9:47 PM

The campfire scene: the heart of every team movie and the greatest weakness of Rogue One

The campfire scene gets its name from stories in which people on a journey stop for a meal and have nothing to do but talk. Campfire scenes reveal character, both to the audience and to the other characters. They give the members of a new team a chance to bond. They make us believe a story is about individuals rather than archetypes. The campfire scene is to a story about a team what the falling in love scene is to a romance: it makes us want to see the characters succeed.

Rogue One would've been much better with a campfire scene. There might be one on the cutting room floor—one character calls another "little sister", which only makes sense if they'd had time to form a bond. There were plenty of opportunities for campfire scenes—a story can have many—and yet the few attempts did nothing to convince me that any of the team members came to care for anyone they had not already cared for, except the guy in charge of the mission, who apparently liked the hero because she was of the desired sex and reasonably competent.

Posted by Will Shetterly at 8:00 AM