A black man and a white woman fight, or Will identitarianism destroy the DSA?

Two people I've admired from a distance are fighting. One's Amber A'Lee Frost who writes for The Baffler; the other's R. L. Stephens, who wrote The Birthmark of Damnation: Ta-Nehisi Coates and the Black Body. In a public post on Facebook yesterday, Stephens wrote:


Someone named Kate Hudson just threatened to punch me when she sees me. This is how some people in DSA get down, and please believe these dynamics are incredibly racialized.

This organization must not tolerate this type of lynch mob environment. I won’t stand for it and I know I’m not alone in that regard.

And he shared this screen cap: 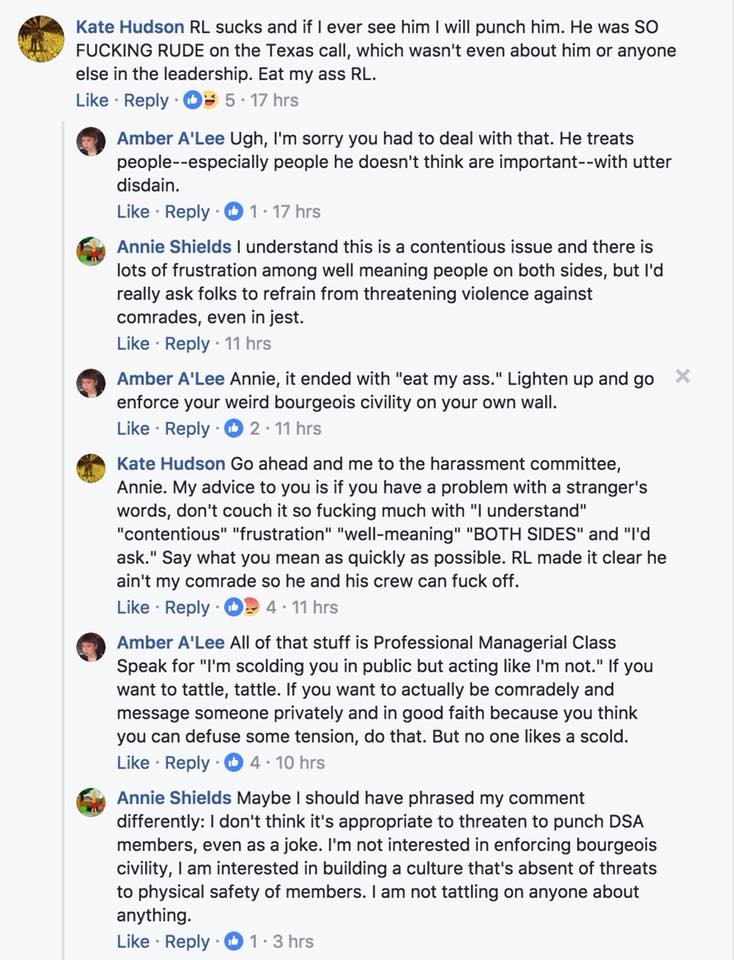 And there's a question anyone reading the screen cap should ask: Why did at least two women think Stephens was "so fucking rude" and in the habit of treating "people he doesn't think are important" with "utter disdain"? In a time when identitarians are insisting we should listen to women, why are these women's complaints being ignored by Stephens and his fans?

Part of the problem is the rules of Oppression Olympics have never been clarified. When a black man and a white woman fight, is the problem racism or sexism? Does the person who first calls dibs on their ism automatically win? Or do you simply do what every identitarian I've ever seen do and declare the person with your politics is right and the other one's the appropriate ist?

I don't know whether Frost or Hudson or their followers are talking about sexism, but Stephens' followers are sure talking about racism. On Twitter, he's continuing to insist there's racism without citing any examples. All that's relevant to him is Hudson's race, which makes me wonder if he's never known an exasperated black woman to make a rhetorical threat of violence.

I hope he takes a few days off-line to reflect. His quick assumption of racism surprised me because of the insightful things he said about Coates. In angry disputes, we often fall back on simplistic reasons for our conflict—it's easier to say our critics are prejudiced against us than it is to apologize for treating them in ways that made them feel denigrated. It's completely possible that Stephens didn't mean to be rude or disdainful, but if so, he should ask for the chance to clarify this. And if he did mean to be rude and disdainful, he should own it and explain why he thought these women deserved to be treated badly.

This conflict makes me worry about the future of the DSA. It tripled in size thanks to Sanders' run, but Sanders' base is an uneasy coalition of universalists and far-left identitarians. Stephens seems to be simultaneously aware of the dangers of left-identitarianism while willing to default to it in anger.

It will be interesting to see how this ends. I'm hoping for a group hug, but I'm not putting money on that.

PS: If you want to see the original post: R.L. Stephens - Someone named Kate Hudson just threatened to punch...:
Posted by Will Shetterly at 1:48 PM

Email ThisBlogThis!Share to TwitterShare to FacebookShare to Pinterest
Labels: identitarianism