On Douglas Williams, The Guardian, and the DSA, or Why identitarians hate context

If I wrote like Douglas Williams and so many people online, I would first tell you what to think, then share screen caps or links so you would read them with my interpretation in mind. It's an ancient trick that should have a name and probably does. It's a way of pretending to be objective while promoting your bias.

And I suppose I've already done that by associating Williams with people who do what he does. We're all human. He and I both should be forgiven some missteps when we're trying to make our point and be fair to the other. 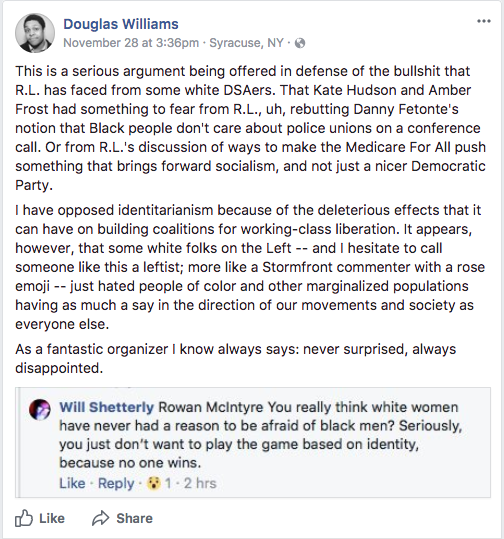 Williams' screen cap is from the comments on R. L. Stephens' public post (which I wrote about yesterday in A black man and a white woman fight, or Will identitarianism destroy the DSA?): 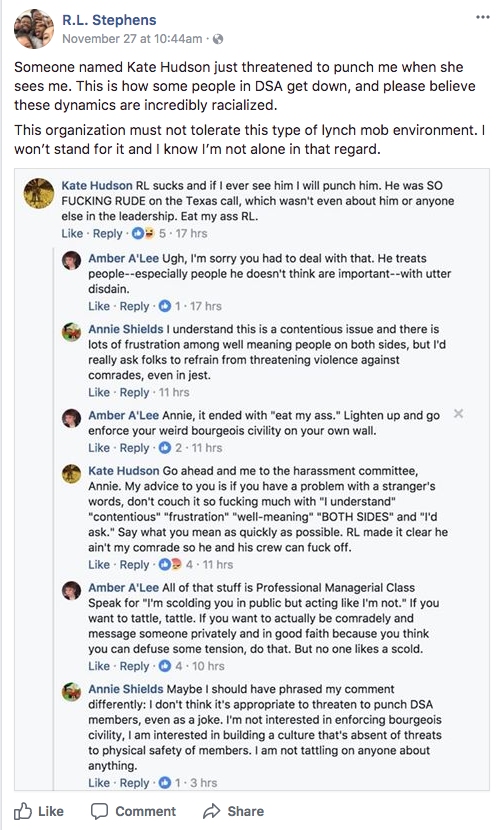 From the comments there, some of the context that Williams omits (the reference to "our man" is to Stephens):

Williams entered the discussion much later in the comments: 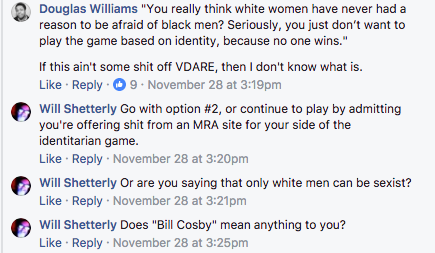 He ignored that. In his version of Oppression Olympics, women should only be afraid of white men.

I keep being amazed by the selective way identitarians read. But then I remember Adolph Reed Jr.'s observation near the end of The limits of anti-racism:


Yes, racism exists, as a conceptual condensation of practices and ideas that reproduce, or seek to reproduce, hierarchy along lines defined by race. Apostles of antiracism frequently can’t hear this sort of statement, because in their exceedingly simplistic version of the nexus of race and injustice there can be only the Manichean dichotomy of those who admit racism’s existence and those who deny it. There can be only Todd Gitlin (the sociologist and former SDS leader who has become, both fairly and as caricature, the symbol of a “class-first” line) and their own heroic, truth-telling selves, and whoever is not the latter must be the former. Thus the logic of straining to assign guilt by association substitutes for argument.

Ah, well. I continue to think third parties don't have a chance in the US's two-party system, so I hope the DSA can succeed. But if I was a capitalist who wanted to guarantee their failure, I'd do all I could to promote their identitarian wing.

This post is long enough, so I'll stop. But if you're curious about left-identitarianism's long history of failure, you might start with Antiracism campaigns: Twenty years of making racism worse.

P.S. I forgot to say anything about the Guardian. I mentioned it because Williams has written for them. Like all major liberal news sources, its writers are far more comfortable writing about identity than class.
Posted by Will Shetterly at 9:12 AM