Technically, Alani the South Sea Girl and Mei-Ling the Girl Commando are both pulp heroes or action heroes rather than superheroes, but in the colloquial sense, they count: they wore distinctive clothing and fought for justice. If Tarzan and Blackhawk are superheroes, Alani and Mei-Ling are too. If you think I'm cheating by including a jungle hero and a paramilitary hero in this series, that's fine—but I'll note that in the comics, jungle heroes and paramilitary heroes often fight beside characters who meet anyone's definition of a superhero, and in cases like the Black Panther and the Punisher, they blur the lines or shatter them. 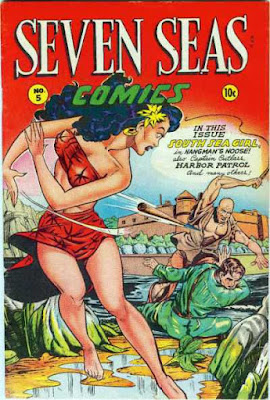 Alani the South Sea Girl was drawn by one of comics' first black artists, the great Matt Baker. She was an early eco-heroine; as noted at South Sea Girl, she...


...was the ruler and protector of a chain of volcanic tropical islands in the South Pacific called the Vanishing Isles. She teamed up with Captain Ted to prevent oil tycoons from taking over her islands. She has no powers, but is strong enough to swim through a typhoon, can kill a shark easily, and is a knowledgeable mariner.

Though Alani is colored "white", the dialogue makes it clear she is not. In Seven Seas #4, Alani has agreed to replace a prima donna actress in a movie. When the actress tries to kill Alani, Cheeta, Alani's pet jungle cat that the actress has abused, attacks the actress. A bystander shouts, "He'll kill the white woman!" Referring to the actress as a white woman only makes sense if no one thinks Alani is white. 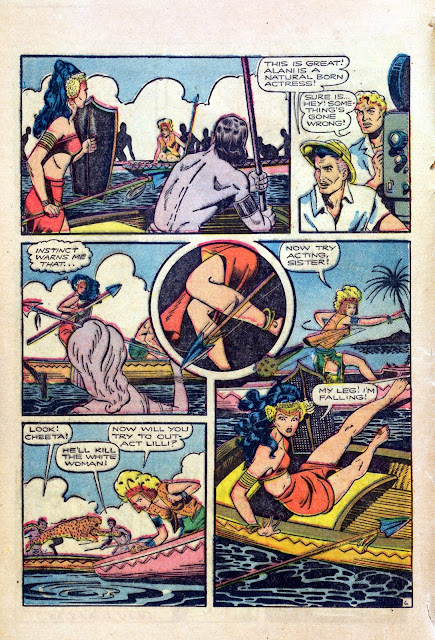 The Girl Commandos' name suggests they were counterparts of the popular Boy Commandos, but they were an international group of women like the Blackhawks—with one difference that matters in any history about comic book characters of color: The writer treated Mei-Ling, their Chinese member, with respect, unlike the Blackhawk's Chop-Chop who, for twenty years, didn't even get to wear the Blackhawk uniform.

ETA: There may be an interesting piece to be written about early comics, race, and newsprint coloring using Mei-Ling: her color varies. Sometimes she's pink like the Caucasians, sometimes she's yellow, but she may most often be orange or brown. Colorist mistakes and limitations of the technology explain some of the inconsistencies, I suspect, but not all. Villainous Asian characters were fairly consistently colored yellow.

Mei-Ling of the Girl Commandos.

A guide to my posts on public domain superheroes of color
Posted by Will Shetterly at 12:14 PM