Red Son Superman versus Sovietman! plus their suits for Poser and DAZ 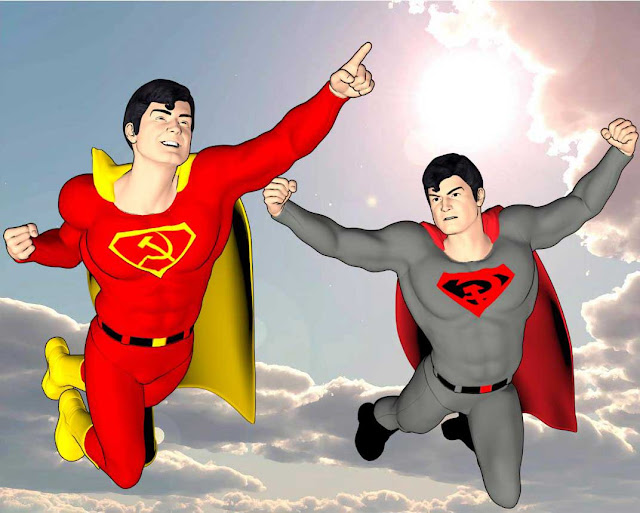 I read Superman: Red Son too long ago to remember why it disappointed me. I suspect I wanted to either read a fun story in an alternate world or a profound commentary on capitalism, communism, libertarianism, and authoritarianism, and I didn't get either.

When I decided to recreate the character's costume, I realized something else. While I admire the Red Son Superman's design, I know it reflects US propaganda in the most heavy-handed way. The color scheme is more appropriate for Hitler's Germany than Stalin's Russia. If the Soviets had designed a superhero costume that suggested authority, they would've chosen their military colors, green and red. But what's most likely is they would've used the colors of their flag.

So I've made two costumes for the free Uzilite Super Hero for Poser and DAZ's Michael 4. The first is for the Red Son Superman, which, I am sure, is thoroughly trademarked by DC. The second is for a character I call Sovietman, who I am placing in the public domain for anyone to use. The logo is my creation, but DC's lawyers could claim the design is too close to Superman's because of its shield shape, so use it at your own risk.

At Renderosity: Red Son Superman and Sovietman for Uzilite M4 Suit
Posted by Will Shetterly at 7:48 PM