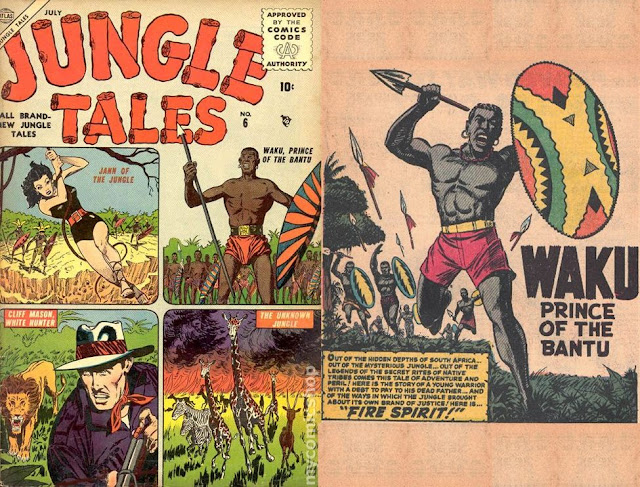 
One regular feature in Jungle Tales, "Waku, Prince of the Bantu", starred an African chieftain in Africa, with no regularly featured Caucasian characters. Marvel Comics' first Black feature star,[3] he was created by writer Don Rico and artist Ogden Whitney, succeeded by artist John Romita Sr. Waku, who predated mainstream comics' first black superhero, Marvel's Black Panther, by nearly a dozen years, headlined one of four regular features in each issue. It would take a decade for the first African-American series star, the Western character Lobo, to appear, and nearly two decades before the likes of the Black Panther, Luke Cage, and the Falcon would star in solo series.

Image via Eric Wilkinson-Gilyard
Posted by Will Shetterly at 11:49 AM

Email ThisBlogThis!Share to TwitterShare to FacebookShare to Pinterest
Labels: comics heroes of color