There are no male or female brains

Scans prove there's no such thing as a 'male' or 'female' brain | New Scientist:


...there is no such thing as a female or male brain, according to the first search for sex differences across the entire human brain. It reveals that most people have a mix of male and female brain features. And it also supports the idea that gender is non-binary, and that gender classifications in many situations are meaningless.

Though the article is very good, it does have the common confusion about sex and gender:


Joel envisions a future in which individuals are not so routinely classified based on gender alone. “We separate girls and boys, men and women all the time,” she says. “It’s wrong, not just politically, but scientifically – everyone is different.”

But other scientists contacted by New Scientist don’t think that will ever be possible – as a sexually reproductive species, identifying a person’s biological sex will always be of paramount importance to us, they say.

Sex is not gender. Sex is what your genes say you are; gender is what society says you are. I believe we will have a future in which gender no longer matters and sex is seen as only sex, so instead of people imagining fundamental differences between men and women, there will be the soft differences we have between people who are tall or short, or right-handed or left-handed. Gender, like race, is a social construct that was of limited use and can be discarded now.

Though we only have proof now that there are no fundamental differences between men and women, we have known this for thousands of years. From the Christian Bible:

"There is neither Jew nor Gentile, neither slave nor free, nor is there male and female." —Galatians 3:28
Posted by Will Shetterly at 11:13 AM No comments:

today's example of the heartlessness of left identitarianism

This is the inevitable conclusion of race and gender reductionism.

ETA: Two examples of black identitarians mocking poor white people
Posted by Will Shetterly at 10:06 AM No comments:

Yes or no? Superman was the first superhero

"...like the pulps before them, comic books and comic strips contained all the elements of the superhero — the powers, the mission, the identity — but it took Siegel and Shuster to put them all together into Superman." —Peter Coogan

Superheroes owe so much to Superman that they use his name—if Superman had the name of his first imitator, Wonder Man, we would speak today of wonderheroes.

Coogan's attempt to list the defining elements is probably as good as any, so I'll expand on it:

1. The powers are an extraordinary ability. Even human superheroes like Batman are far, far better at what they do than almost anyone else.

2. The mission is a commitment to justice. The "hero" in "superhero" matters. Monsters like the Heap and the Hulk are sometimes called superheroes, but they usually do what they do out of necessity, not choice. Superheroes may wish someone else could do their jobs, but they follow the code that is Stan Lee's best line (though the idea is at least as old as the Bible): "With great power comes great responsibility."

3. The identity is a public persona that includes a distinctive name and appearance, which is separate from a private persona that lets the person pass in public without being easily recognized. Even the superheroes who don't have secret identities are best known in their superheroing roles—like other celebrities, they won't necessarily be recognized in common clothes.

The Oxford English Dictionary says the word was borrowed from the French and has examples of it being used as a noun before Superman's appearance in 1938:

1899   Daily Mail 29 Sept. 4/4   M. Clémenceau suddenly burst out with, ‘All the world knows that Colonel Picquart is a hero, but..if Colonel Picquart is a hero, Mathieu Dreyfus is a super-hero.’
1917   ‘Contact’ Airman's Outings 211   The super-heroes of the war.
1924   N.Y. Times 16 Dec. 28/1   It is all very well to have a super-hero in such narratives, but this man among men should occasionally show signs of being human.
1937   Thrilling Wonder Stories Aug. 120/2   The strip started off very well, but I must agree with others that it is rapidly degenerating into the juvenile antics of a musclebound superhero.

And as a compound:

1916   Harper's Weekly 11 Mar. 245/2   A super-hero bill... This was a bill to give more than their regular pensions to soldiers who had been more heroic than their duty called for.

Merriam-Webster's definition points out that the superness of a superhero only calls for superheroes to be extraordinarily good at what they do:

a fictional hero having extraordinary or superhuman powers; also : an exceptionally skillful or successful person

If we use the three categories that Coogan and others cite to say Superman is the first superhero, we can eliminate many of the popular candidates.  The Scarlet Pimpernel and Robin Hood did not have costumes—most predecessors of the superhero wanted to be able to blend in rather than be recognized. Spring Heeled Jack was a villain. John Carter and Tarzan used the names they had grown up with and did not have private lives that were separate from their public ones. Mandrake was a magician—if you say he's the first superhero, you have to explain why Merlin or Circe is not.

But masked heroes like the Scarecrow (who appeared in 1915, several years before Zorro) meet the three requirements. The Lone Ranger and the Phantom both abandoned their private lives, but they still kept their identities a secret and sometimes mixed in society in street clothes.

Related: Skintight costumes—why the Domino Lady may have been as important as the Phantom in the creation of Superman

ETA: While I was writing this, comments were being made on a Facebook post, Wrong on several counts, that are relevant, and since I wrote this, it's become part of the discussion there.
Posted by Will Shetterly at 11:26 AM No comments:

On private censorship: social media sites are like printers, not publishers

A popular argument in support of social media censorship is that publishers aren’t obliged to publish anyone who submits to them. Which is true. It’s why you can run your social media site as you please and block anyone you please. “My site, my rules” applies to all publishers.

Responding to someone who claimed that people who were banned from social media still had free speech because they could speak elsewhere, Frankie Gaffney said,


Social media sites are technologies, even in their particularities, since the monopolies are so absolute (eg twitter, facebook, YouTube). The comparison would be, when the printing press was invented, to tell someone they alone may not print their ideas, but they still had free speech.

Posted by Will Shetterly at 9:14 AM No comments:

Two points about private censorship by Sarah Wunsch of the ACLU

When Clark University invited Norman Finkelstein to speak, then canceled the speech in response to protesters, Sarah Wunsch of the ACLU wrote:


...the cancellation of his speech violates the basic principles of freedom of speech and academic freedom which are so fundamental to an institute of higher learning. The existence of an opportunity to speak at another time or in another location does not remedy the wrong of censorship.

...Nor may complaints from those disturbed by Finkelstein’s writings about the post-Holocaust “industry” justify a decision to prevent the lecture from taking place. Indeed, even if demonstrators came to protest against Finkelstein’s views, the obligation of a university is to protect the speaker’s right to be heard and prevent disruption of the speech by others. By censoring speech because of complaints about offensiveness or the controversial nature of the speaker, the university has essentially allowed what the courts call a “heckler’s veto” over what speech can be heard.

From XKCD doesn't understand free speech—or the difference between legal and moral rights
Posted by Will Shetterly at 8:44 AM No comments:

Historians of the superhero call the Phantom the first superhero for one reason: Early in 1936, two years before Superman's first appearance, the Phantom wore a skintight costume. He met other criteria for being a superhero, but they're much older than comics or cartoons: he used an alias and wore a mask.

A skintight costume makes sense in cartooning. The Phantom deserves to be called the first superhero. But he never wore his costume under street clothes, something that's part of the superhero tradition since Superman's debut in Action Comics #1: 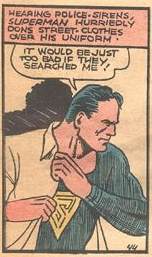 But another costumed adventurer wore her skintight costume under her street clothes only a couple of months after the Phantom appeared. 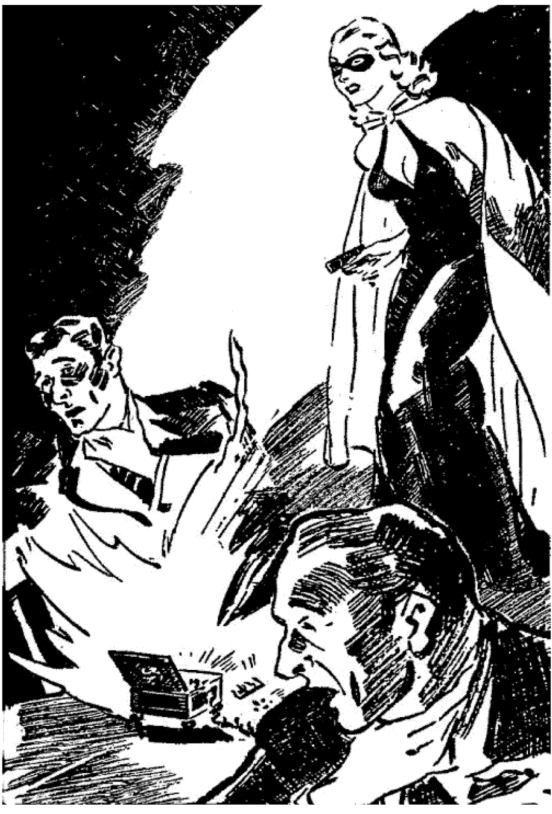 From the Domino Lady's first story in the May 1936 issue of, I kid you not, Saucy Romantic Adventures: 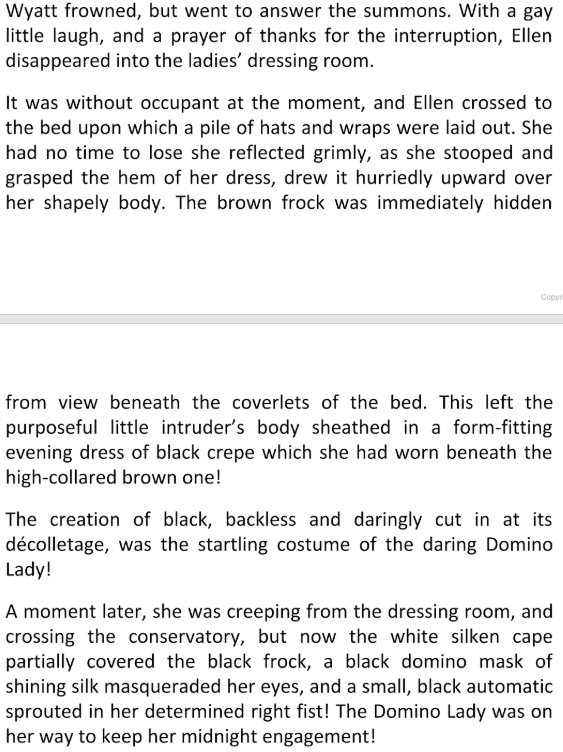 Did Siegel or Shuster read any of the Domino Lady's stories? I don't know, but it's likely—they loved pulp adventure. Even if they didn't, the Domino Lady appears to be the first superhero who wore her costume under her street clothes.

She also may've been the first to refer to her adventuring outfit as a costume. Superman thought of his as a uniform.

Related: Yes or no? Superman was the first superhero

Possibly of interest: A discussion of early costumed heroes at Who Was First?? - Comic Book Plus Forum
Posted by Will Shetterly at 10:36 AM No comments:

I recommend reading Did enough Bernie Sanders supporters vote for Trump to cost Clinton the election?, but if you're too busy or too lazy, here are the essential bits:


Based on data from the 2008 Cooperative Campaign Analysis Project, a YouGov survey that also interviewed respondents multiple times during the campaign, 24 percent of people who supported Clinton in the primary as of March 2008 then reported voting for McCain in the general election.

An analysis of a different 2008 survey by the political scientists Michael Henderson, Sunshine Hillygus and Trevor Thompson produced a similar estimate: 25 percent. (Unsurprisingly, Clinton voters who supported McCain were more likely to have negative views of African Americans, relative to those who supported Obama.)

Thus, the 6 percent or 12 percent of Sanders supporters who may have supported Trump does not look especially large in comparison with these other examples.


...it may be hard to know exactly how many Sanders-Trump voters there were, or whether they really cost Clinton the election. But it doesn’t appear that many of them were predisposed to support Clinton in the first place.

Which is why Sanders would've won.

Related: A short FAQ: Sanders would've easily beaten Trump
Posted by Will Shetterly at 11:46 AM No comments:

Weaponizing the disabled for censorship and plastics

2. To promote the plastics industry: Disability group wants pause on straw ban campaign - BBC News. Paper straws work. Yes, they can get soft if you take a long time with one. Then you get another.

If you want to comment on the second point, before you do, please read If you think banning plastic straws is a mistake.
Posted by Will Shetterly at 11:23 PM No comments:

If you think banning plastic straws is a mistake

1. It’s not a complete solution.

Literally no one is saying that it is. Change has to start somewhere.

No one is talking about banning all disposable straws. Paper bendy straws are still available.

3. It’s a moralistic solution that blames the consumer instead of capitalism.

I’m a socialist, but this objection baffles me. We consume too much disposable plastic because of capitalism in general and the petrochemical industry in particular. Banning plastic straws is not a moralistic solution. It’s a systemic solution. What’s moralistic about telling capitalists they can’t have this market? By that logic, the automobile industry should not have been forced to provide seat belts.
Posted by Will Shetterly at 8:51 AM No comments: