The following tweets from a woman whose twitter bio announces that she writes about "race in the U.S. from 1619-present" were even more surprising than the things I noted previously.

1. The history of voting is more complex than she thinks. 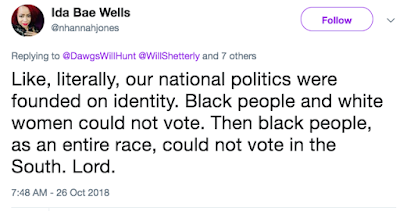 I replied, "Respectfully, read more history. Poor white men could not vote at first either. Property was the first requirement."

Race reductionists cannot grasp that our founders prioritized class. During the colonial period, voting in the US was based on owning land.  Heads of households were usually male, but widows could vote because class trumped identity. In some colonies, wealthy people of the wrong religion (Jews, Catholics, etc.) or race (blacks, Native Americans, etc.) were excluded along with poor white men, but they kept the other privileges of wealth.

The principle that wealth mattered most continued after 1776. In New Jersey, wealthy white women as well as wealthy people of color could vote when poor white men could not. Rich black men could vote in Massachusetts, New Hampshire, Vermont, and Maine. The triumph of identity as a requirement to vote came decades later, when property requirements were being discarded. From Liberty, Equality, Power: A History of the American People: 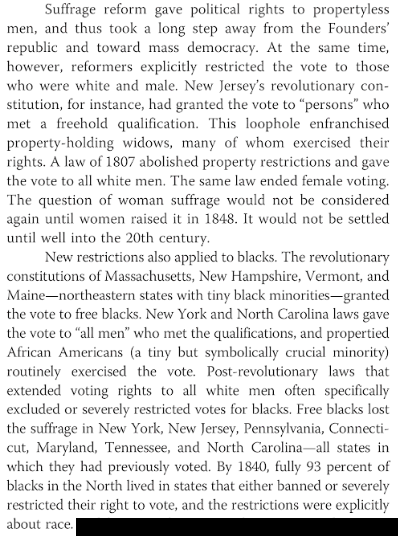 2. Seriously more complex than she thinks. 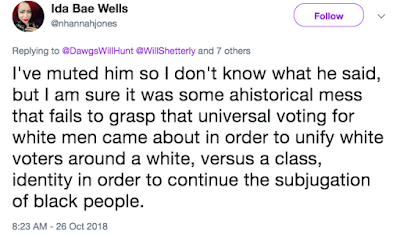 This conflates several historical processes. Racism in the US had been growing ever since Bacon's Rebellion, when the rich began dividing the working class by race. In parallel, the demand for democracy was growing. Most people know that correlation is not necessarily causation, but Ms. Hannah-Jones happily links two things to support her reductionist thesis.

3. There were very rich black slaveowners. 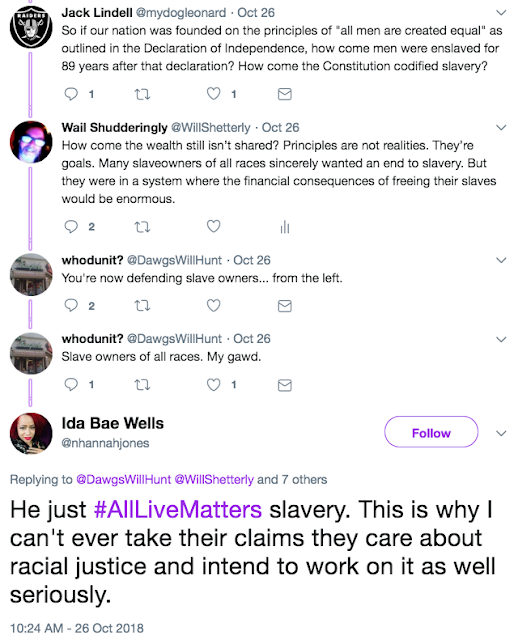 I replied, "If you don't know about rich black slaveowners, you should not be writing about race or slavery" and suggested she start with William Ellison.

The existence of black slaveowners is a sore point with people who cannot see the contradiction in insisting slavery was an individual choice for white slaveowners so you should not say anything good about someone like Jefferson, but it was a systemic matter for black slaveowners, so you should excuse people like the Widow C. Richards. When someone offered a link to Black Slaveowners, a book by Larry Koger, who studied history at Howard, a historically black university, Ms. Hannah-Jones tweeted that offering inconvenient facts would result in being blocked:

Some of her followers insisted the number of black slaveowners was too small to be relevant, but any fact that does not fit a thesis is relevant. There were certainly more than a handful. R. Halliburton Jr. notes, "The census of 1830 lists 3,775 free Negroes who owned a total of 12,760 slaves."

We also know that some black slaveowners were extremely wealthy. See Henry Louis Gates' Did Black People Own Slaves? and Top 10 Black Slaveowners.

4. There were slaves who were legally white. 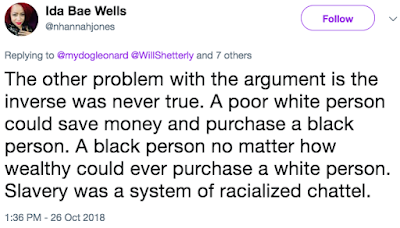 While it is true that slavery in the US was racialized, black people could buy white people. Many people assume the one-drop rule for whiteness was always the rule, but it was a creation of Jim Crow. They also assume that being black was the requirement for being a slave, but the actual requirement was being the child of a slave.

New Englander George Fuller painted "The Quadroon" after visiting a slave sale in the south. 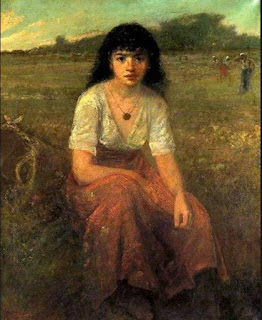 He wrote about it:


Who is this girl with eyes large and black? The blood of the white and dark races is at enmity in her veins—the former predominated. About ¾ white says one dealer. Three fourths blessed, a fraction accursed. She is under thy feet, white man. . . . Is she not your sister?

His use of "accursed" is poetic, not racist—note his question for white men who have the power to end slavery. Her curse is the law that lets her be a slave because her mother was one. Some racist abolitionists hated slavery primarily because it allowed for the enslavement of white people—see examples at White Slaves – The Multiracial Activist.
Posted by Will Shetterly at 3:18 PM