Things I learned from tweeting with Nikole Hannah-Jones

I was just in a long and much-too-distracting but still informative twitter war that began when I made this tweet citing How Obama Destroyed Black Wealth: 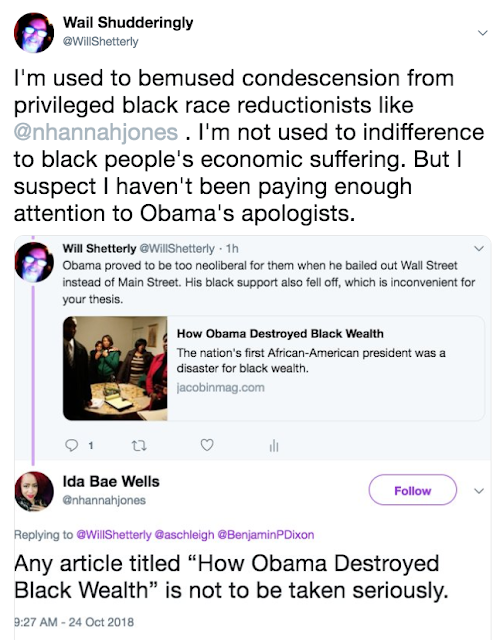 Numbered for convenience, not importance:

1. "Bemused" really wasn't the right word. I hates that, I do. But, as Twain noted, sometimes you reach for lightning and get a lightning bug.

2. When lots of identitarians attack me, I get more Twitter followers. Add this to the list of ways identitarianism constantly defeats itself.

3. I suspect I'd like Nikole if I knew her, and I completely understand why people who share her ideology admire her.

4. Like most privileged identitarians that I've met, she is extremely sensitive to any hint of condescension and extremely quick to ridicule people she disagrees with.

5. I do not have a clue what she thinks her political philosophy is. She insists she is not a neoliberal, she defends Obama's and Clinton's neoliberalism, and she agreed when I cited Malcolm X's observation, "You can't have capitalism without racism."

6. Her contradictions are magnified in her fans. The most ignorant claim I saw: 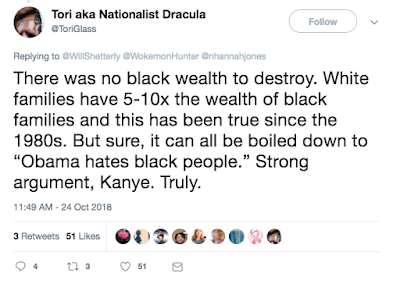 7. Identitarians don't understand that statistics are irrelevant when talking about individuals. A homeless guy sleeping next to Bezos's home is part of a two-person community with an average wealth of $78 billion dollars, but he still has none of it.

8. Her ideological contradictions are powerful, as this tweet shows: 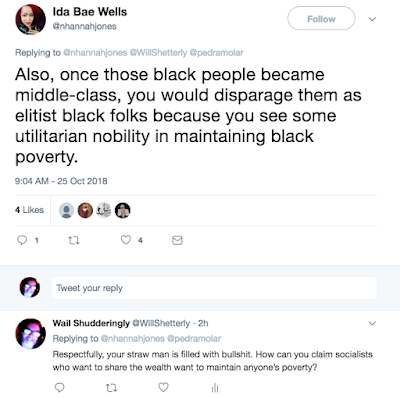 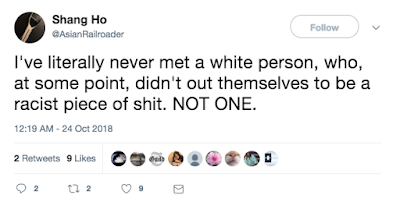 As you may guess, Shang Ho thinks white people are privileged for statistical reasons and doesn't care that Asian Americans are more economically privileged than white ethnically Christian Americans because US immigration laws ensure that, except for refugees, Asian immigrants are wealthy or well-educated.
Posted by Will Shetterly at 11:22 AM