Five quotes by Marx and Engels about democratic revolution, plus one against revolutionary dictatorships

“Above all, it will establish a democratic constitution, and through this, the direct or indirect dominance of the proletariat.” — Friedrich Engels, Principles of Communism, 1847

"the first step in the revolution by the working class, is to raise the proletariat to the position of ruling class, to win the battle for democracy" —The Communist Manifesto, 1848

“there are countries – such as America, England, and if I were more familiar with your institutions, I would perhaps also add Holland – where the workers can attain their goal by peaceful means.” —Karl Marx, 1872 speech in Amsterdam

"Thinking men of all classes begin to see that a new line must be struck out, and that this line can only be in the direction of democracy. But in England, where the industrial and agricultural working class forms the immense majority of the people, democracy means the dominion of the working class, neither more nor less. Let, then, that working class prepare itself for the task in store for it, — the ruling of this great empire; let them understand the responsibilities which inevitably will fall to their share. And the best way to do this is to use the power already in their hands, the actual majority they possess in every large town in the kingdom, to send to Parliament men of their own order. [...] Moreover, in England a real democratic party is impossible unless it be a working men's party." —Frederick Engels' 1881 article in The Labour Standard

"From Blanqui's assumption, that any revolution may be made by the outbreak of a small revolutionary minority, follows of itself the necessity of a dictatorship after the success of the venture. This is, of course, a dictatorship, not of the entire revolutionary class, the proletariat, but of the small minority that has made the revolution, and who are themselves previously organized under the dictatorship of one or several individuals." —Frederick Engels
Posted by Will Shetterly at 3:44 PM

Selections from Marx’s Critique of the Gotha Programme

I wish Marx had simply rewritten the Gotha Programme, but what he did instead was typical of him: he shredded it. In the shredding are essential elements of his thought, so I will pluck out the ones that strike me now:

Labor is not the source of all wealth. Nature is just as much the source of use values (and it is surely of such that material wealth consists!) as labor, which itself is only the manifestation of a force of nature, human labor power.

In England, the capitalist class is usually not even the owner of the land on which his factory stands.

In a higher phase of communist society, after the enslaving subordination of the individual to the division of labor, and therewith also the antithesis between mental and physical labor, has vanished; after labor has become not only a means of life but life's prime want; after the productive forces have also increased with the all-around development of the individual, and all the springs of co-operative wealth flow more abundantly – only then can the narrow horizon of bourgeois right be crossed in its entirety and society inscribe on its banners: From each according to his ability, to each according to his needs!

It is altogether self-evident that, to be able to fight at all, the working class must organize itself at home as a class and that its own country is the immediate arena of its struggle – insofar as its class struggle is national, not in substance, but, as the Communist Manifesto says, "in form". But the "framework of the present-day national state", for instance, the German Empire, is itself, in its turn, economically "within the framework" of the world market, politically "within the framework" of the system of states. Every businessman knows that German trade is at the same time foreign trade, and the greatness of Herr Bismarck consists, to be sure, precisely in his pursuing a kind of international policy.

Between capitalist and communist society there lies the period of the revolutionary transformation of the one into the other. Corresponding to this is also a political transition period in which the state can be nothing but the revolutionary dictatorship of the proletariat.
Posted by Will Shetterly at 3:05 PM

The rich claim institutions are meritocracies if merit is rewarded once you're in and overlook the fact that it's easier to get in if you're rich. If you want a meritocracy, you have to end poverty. In our current race to the top, many of the runners aren’t starting on the track—they’re starting in the swamp.

One of our planet's most privileged people shows how easy it is for meritocrats to lie to themselves:

“I loved working on Wall Street. I loved the meritocracy of it and the camaraderie of the trading floor.” —Chelsea Clinton

“America thinks of itself as a meritocracy, so people have more respect for success and more contempt for failure.” —Toby Young

“Modern meritocratic society, especially in the United States, ... seeks to justify domination on the ground of justice, virtue, and merit, to say nothing of the insufficient productivity of those at the bottom.” ― Thomas Piketty

“The meritocratic class has mastered the trick of consolidating wealth and passing privilege along at the expense of other people’s children." —Matthew Stewart

“This argument has been codified in the twentieth century as meritocracy, in which those on top in the process of capitalist accumulation have merited their position.“ —-Immanuel Wallerstein

“the percentage of the world's population for whom such ascent was possible has gone up. But even though it has grown up, meritocratic ascent remains very much the attribute of a minority.” —Immanuel Wallerstein

“Meritocracy reinforced hierarchy. ...meritocracy as an operation and scientific culture as an ideology created veils that hindered perception of the underlying operations of historical capitalism.” —Immanuel Wallerstein

“Those who are able to climb up the ladder will find ways to pull it up after them, or selectively lower it down to allow their friends, allies, and kin to scramble up. In other words: 'Who says meritocracy says oligarchy.'” —Chris Hayes
Posted by Will Shetterly at 3:22 PM

Email ThisBlogThis!Share to TwitterShare to FacebookShare to Pinterest
Labels: meritocracy 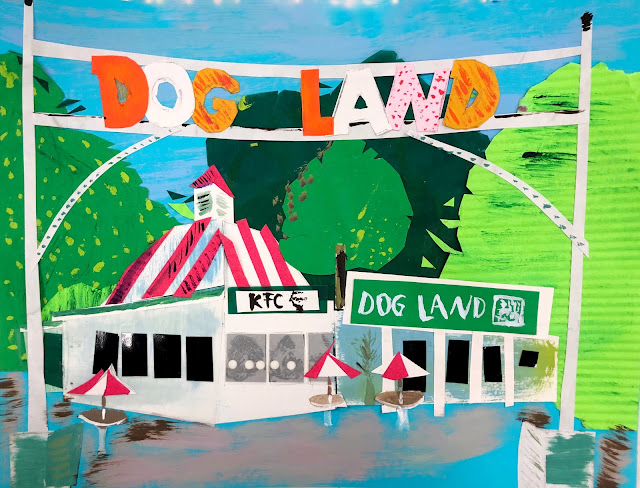 Her instagram: @mhawranillustration
Posted by Will Shetterly at 10:03 PM

Email ThisBlogThis!Share to TwitterShare to FacebookShare to Pinterest
Labels: dog land and dogland

Why I love lurkers, or Can we divide social media's two purposes?

Why I love lurkers, or Can we divide social media’s two purposes?
Posted by Will Shetterly at 1:32 PM

Email ThisBlogThis!Share to TwitterShare to FacebookShare to Pinterest
Labels: lurkers

HENRY LOUIS GATES, Jr.: Well, how did the black power movement relate itself to the Civil Rights movement? Was it a coda? Was it an aftereffect? Was it the next step? Was it the real revolution, or not the revolution?

JULIAN BOND: It promised to be the next step, but I don't think it ever realized that promise. A section of the movement became more nationalistic, pulling on this long stream of nationalism that's ever-present in black America, and schisms between black and white workers developed. Whites were expelled. The movement lost its interracial nature. It lost its larger support in the larger community. They were harmful to the movement. And while they didn't kill it, they certainly slowed it down.
Posted by Will Shetterly at 8:28 PM

A short rant about "institutional racism"

"Racism is an attitude, and institutions can't have attitudes." —Adolph Reed

When I shared that on Facebook, someone I'll call R questioned it, so I said:

If racism is an institution, where is its headquarters? Who are its employees? Who decides its policies?

R pointed to redlining affecting black people, so I added this:

Have you done any reading about "place not race"? White people in redlined areas do not get a pass for being white. The areas are redlined because they are poor. That they are racially disproportionate is beside the fact.

Capitalism's headquarters are where the stock markets are. The terms of exploitation are regulated by the government—that's why the gender wage difference pretty much goes away when you compare pay for the same job.

R then did what Adolph Reed notes antiracists tend to do, which was to say, "Distilled, your claim seems to be, racism isn't a thing. It's misunderstood classism at best, an intellectual failure to apprehend a red herring." I replied:

The problem is your distillation. Of course racism is a thing.

But your use of classism points to the problem. When I first heard the word, I thought it referred to the way capitalism works. Then I realized that it's how liberals talk about class prejudice as though the problem is that the poor aren't treated with more respect.

And yes, you are wrong. Did King stop working on racism to fight the class war?

ETA: Thinking about this, I shared a thought on social media:

If you tell left identitarians that class matters more and identity matters less than they think, they hear you saying identity doesn't matter. They cannot imagine the class-first position, even though it was Martin Luther King's.

Yes, Adolph Reed noted this years ago.
Posted by Will Shetterly at 3:00 PM

The High Cost of Denying Class War by Yanis Varoufakis

Polite society seemed not to give a damn that it had become easier to get into Harvard or Cambridge if you were black than if you were poor. They deliberately ignored that identity politics can be as divisive as apartheid if allowed to act as a lever for overlooking class conflict.

Posted by Will Shetterly at 1:44 AM

Institute of Education, London on 2 May 1996
Posted by Will Shetterly at 1:25 AM

Tapes & Transcripts | The Two Nations Of Black America | FRONTLINE | PBS
Posted by Will Shetterly at 1:23 AM

A New Sense of Direction (1968) | Carnegie Council for Ethics in International Affairs: When finally reaching for clubs, dogs and guns they found the world and the nation watching. It was at this moment that the power of non-violent protest became manifest.
Posted by Will Shetterly at 1:22 AM

Although intersectionality can usefully describe the effects of multiple oppressions, I propose, it does not offer an adequate explanatory framework for addressing the root causes of social inequality in the capitalist socioeconomic system. In fact, intersectionality can pose a barrier when one begins to ask other kinds of questions about the reasons for inequality—that is, when one moves past the discourse of “rights” and institutional policy, which presuppose the existence of social relations based upon the private ownership of the means of production and the exploitation of labor.

Posted by Will Shetterly at 1:01 AM