Current Affairs and the Sacred Contract Between Writer and Editor

Current Affairs and the Sacred Contract Between Writer and Editor
Posted by Will Shetterly at 12:47 AM

I don't find "socioeconomic" useful. Economic class and social class are distinct if you are willing to look closely—a member of the social elite can be unlucky enough to become working class, and someone who the elite consider "trash" can be lucky enough to join the rich. A sneer is a powerful weapon in a conflict about social class, but when the war is about economic class, only capital matters.

Some people insist social and economic class are too often aligned to separate, but that's obviously not true when your wealth grows or plummets: You keep your social class and lose your economic class. Social class is an identity like race or gender—it stays with you. Economic class is a relationship to capital—it can change in an instant.

Many who change their economic class try to pass as a member of the social class that’s associated with their new economic class. That the first generation in a different social class usually fails shows how hard that is. But with a change of economic class, they immediately gain or lose the things that come with that class, from health care to education to housing, clothing, and food.
Posted by Will Shetterly at 4:42 PM

My impulse is to check the internet to find out “what’s happening” — who is reacting to me, to my event, to my film; what are they saying, thinking, doing. They say abuse survivors are “hypervigilant”; it’s a symptom of PTSD. Certainly those being actively abused are. Social media supplies abuse and enables hypervigilance, everything a victim needs. It’s perfect for compulsively monitoring your abusers. Every social subtlety is significant, a cue and a clue to your safety, who will come to your aid and who will betray or condemn you, as Robin Dunbar elaborated in Grooming, Gossip, and the Evolution of Language. We constantly need to know where we rank in the hierarchy, who our allies and enemies are, and how those alliances shift. We need not only keep track of our friends and enemies, but our friends’ friends and enemies, and our enemies’ enemies and friends. For this, the human brain was designed; language evolved merely to keep better track of ever-shifting ranks, alliances, and enmities, according to Dunbar. No wonder fecebook is so addictive.

Yes, Helena Bonham Carter, everything in life is art, but it is political too 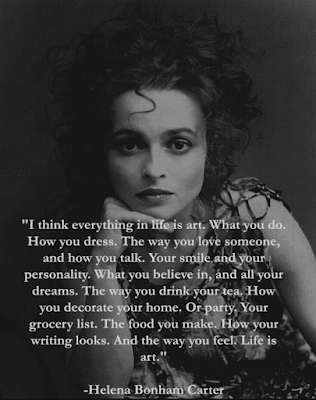 To those who object:

Tea is free? Pens are free? Clothes are free? Parties? Groceries? Homes? Even how you talk is dictated by your educational opportunities. Even your smile has a great deal to do with the dentists you can afford.

Posted by Will Shetterly at 1:27 PM

Marx and Adam Smith on productive labor and art

Talking about whether writers and freelancers are working class brought me to two quotes, one by Adam Smith and one by Karl Marx:

“There is one sort of labour which adds to the value of the subject upon which it is bestowed: there is another which has no such effect. The former, as it produces a value, may be called productive; the latter, unproductive labour. Thus the labour of a manufacturer adds, generally, to the value of the materials which he works upon, that of his own maintenance, and of his master's profit. The labour of a menial servant, on the contrary, adds to the value of nothing. Though the manufacturer has his wages advanced to him by his master, he, in reality, costs him no expense, the value of those wages being generally restored, together with a profit, in the improved value of the subject upon which his labour is bestowed. But the maintenance of a menial servant never is restored. A man grows rich by employing a multitude of manufacturers: he grows poor by maintaining a multitude of menial servants. The labour of the latter, however, has its value, and deserves its reward as well as that of the former.” —Adam Smith

”Milton, for example, who did Paradise Lost, was an unproductive worker. In contrast to this, the writer who delivers hackwork for his publisher is a productive worker. Milton produced Paradise Lost in the way that a silkworm produces silk, as the expression of his own nature. Later on he sold the product for £5 and to that extent became a dealer in a commodity. But the Leipzig literary proletarian who produces books, e.g. compendia on political economy, at the instructions of his publisher is roughly speaking a productive worker, in so far as his production is subsumed under capital and only takes place for the purpose of the latter’s valorisation. A singer who sings like a bird is an unproductive worker. If she sells her singing for money, she is to that extent a wage labourer or a commodity dealer. But the same singer, when engaged by an entrepreneur who has her sing in order to make money, is a productive worker, for she directly produces capital. A schoolmaster who educates others is not a productive worker. But a schoolmaster who is engaged as a wage labourer in an institution along with others, in order through his labour to valorise the money of the entrepreneur of the knowledge-mongering institution, is a productive worker. Yet most of these kinds of work, from the formal point of view, are hardly subsumed formally under capital. They belong rather among the transitional forms.” —Karl Marx
Posted by Will Shetterly at 6:03 PM