A short autobiography by Will Shetterly

When I write about outsiders, I draw on this part of my life:

In the early 1960s, my family ran a small roadside attraction in Florida called Dog Land, a zoo of dogs with over 100 breeds on display. After we were drawn into the civil rights struggle, word went out that the Ku Klux Klan would burn us down, so we couldn’t get fire insurance. We got death threats in the middle of the night that left Mom in tears. Dad taught me how to carry the shotgun to him in case the Klan came, though they never did, perhaps because the business was failing and we had to move, perhaps because they knew about Dad’s shotgun, perhaps because they had realized the age of white power in America was beginning to end.

That was when I began to hate, fear, and pity mobs, bullies, and conformists.

When I write about working class folks, I draw on this:

I was born in an army hospital. My first home was a trailer house. For most of my childhood, I shared a bedroom with my brother and sister. One of my best friends lived in a shack by a railroad track; the other lived in a trailer that I thought luxurious because it was so much nicer than our small cinderblock home. Almost everything we owned was second-hand. The refrigerator usually held powdered milk, some form of powdered orange Vitamin-C drink, and the cheapest “cheese food” because they cost less than real milk, orange juice, and cheese—one reason I loved school was the food was better.

My education was mostly in public schools. I graduated from an inner-city public school in Washington, DC that was 80-90% black. For half of my adult life, I rented because I couldn’t afford to buy. Today, I live in a working-class neighborhood, and my wealth is almost exactly the same as the average American’s, which is less than the wealth of the average white American’s.

When I write about rich folks, I draw on this:

I spent fourth and fifth form—the equivalent of tenth and eleventh grade—at Choate, one of the US’s elite prep schools. I graduated from Beloit, a private liberal arts college. I was engaged to a woman who lived in a chateau on the Riviera. Though I’m a citizen of a country where most people live and die near the economic class in which they’re born, I’ve bounced more than most Americans, never hitting top or bottom, but coming close enough to each to wonder if that was where I would end.

When I write fiction:

I’m rarely political because tracts bore me, but it’s impossible to write well without revealing your sympathies.

In the 1980s, when most fantasy worlds were set in vaguely European lands inspired by J.R.R. Tolkien and Robert E. Howard, Emma Bull and I edited Liavek, a series of short stories set in a world inspired by the Arabian nights. I created Captain Confederacy, the first female black superhero who had her own series from a major comics publisher. My second novel, Witch Blood, is about a dark-skinned adventurer wandering through a land of pale-skinned people. Dogland is a semi-autobiographical novel about my families experiences in the 1960s. The Feminist SF Wiki said my “work features strong women characters and people of color”, which pleased me, but also surprised me. I don’t try to write strong characters of any race or gender. I try to write characters like the people I’ve known.

How racist am I?
What kind of feminist am I?
About Dog Land, the place, and Dogland, the novel

"There's only one rule that I know of, babies—God damn it, you've got to be kind." —Kurt Vonnegut

“My country is the world, and my religion is to do good.” ― Thomas Paine

"I never could believe that Providence had sent a few men into the world, ready booted and spurred to ride, and millions ready saddled and bridled to be ridden." — Richard Rumbold

"Call it democracy, or call it democratic socialism, but there must be a better distribution of wealth within this country for all God’s children." — Martin Luther King 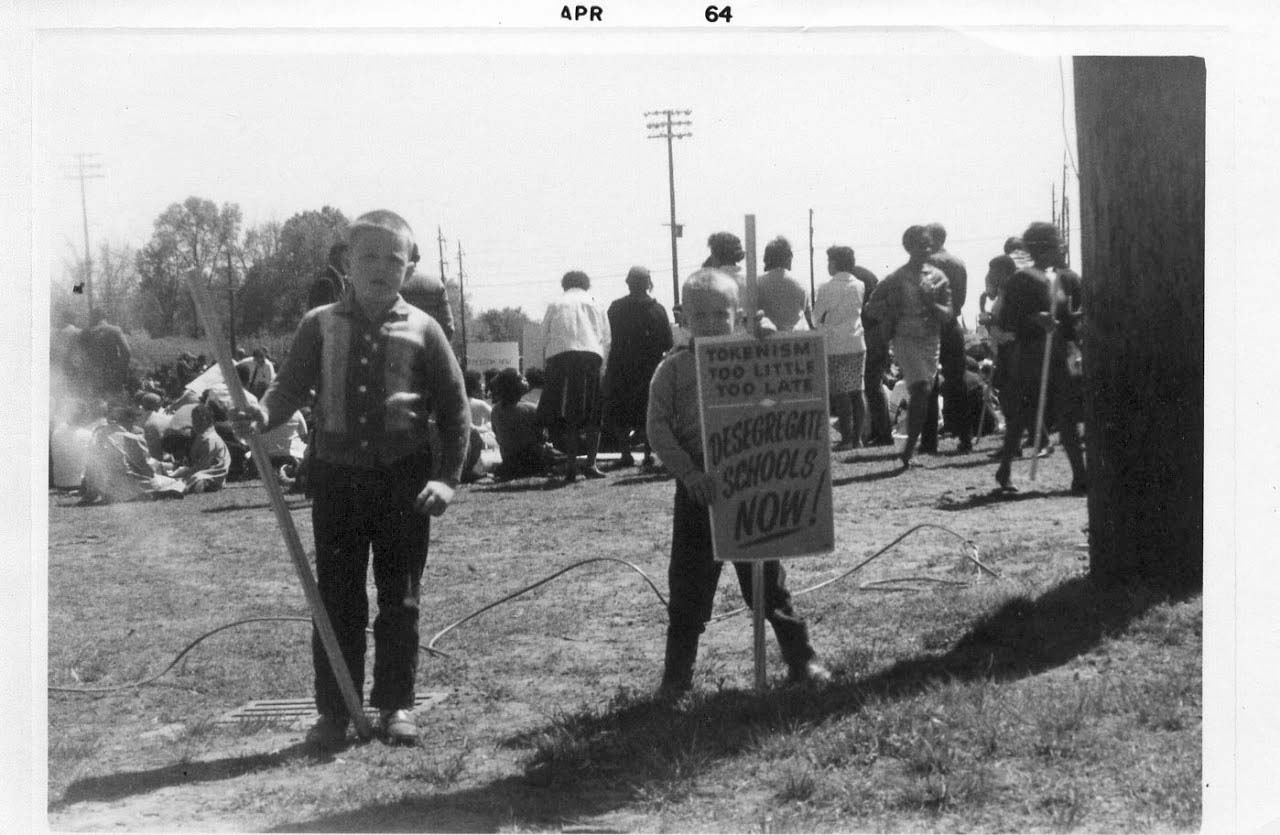 1964: my brother and I are a civil rights protest.
He holds the "Desegregate Now!" sign.
(click to enlarge)